On Zoom-Age Academia and the Problematic Thomas Carlyle

The conditions of collective near-house-arrest get worse. Of course I’m worried about my father, in his nineties in a Scottish care home. But I’m even more worried about the numerous teenagers and young adults known to me personally whose distress signals are getting noisier daily. I’m also terrified by the creeping surveillance of our every move, inaugurated by having to give personal data just to go out for a coffee.

But in times like these it’s important to celebrate any glimmer of light, and for me that has been the newfound opportunities to drop into academic events across the country and even the planet. PLEASE can we continue to make all our seminars open to anyone with an internet link once this epidemic is finally over?

Over the last couple of weeks I’ve been virtually in London, toasting Nat Haynes’ brilliant new book on women in Greek myth, in Athens, expatiating on Greek democracy, in Glasgow lapping up Prof. Christopher Pelling’s insightful talk on editing Thucydides, and—best of all—in St. Andrews yesterday, giving a lecture on my old accomplice Henry Stead’s undergraduate course on Scotland and the Classics.

My theme was Thomas Carlyle, author of Sartor Resartus and Past and Present, which used Classics in pathbreaking ways and transformed the attitude of the Victorians to poverty and working-class discontent. He identified with Cassandra in popular Siege of Troy spectacles, doomed to forecasting disaster but never believed in time. His Arachnes were the dehumanising looms and machines to which workers became shackled by the industrial revolution. His Midases were the avaricious owners of land and means of production who tried to turn everything into lucre but lived empty moral lives in the process.

His Sphinxes were the Manchester operatives who lost their lives at Peterloo, but only after putting the unanswerable, terrifying riddle to the nation—how to solve the class struggle? His hydras were the million-headed underclasses that no Herculean state militia could ever defeat definitively. But there is hope, which he expressed by quoting Tennyson’s ‘Ulysses’: it might yet be possible for the human race to reach the ‘Happy Isles’.

Carlyle’s almost incalculable influence was exerted through his myriad admirers: Keir Hardie, George Eliot, Charles Dickens, William Booth, and the entire Trade Union movement.   The docker Ben Tillett, effectively founder of the TGWU, recalls being ‘spellbound by the dark fury’ of Carlyle’s spirit’.    In 1906, when Labour MPs and the Liberals who had supported the 1903 Lib–Lab pact were polled, they named Carlyle (along with the Bible) as the reading matter that had influenced them most. 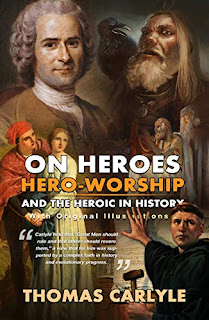 Yet Carlyle, who believed that history was driven by brilliant individual ‘heroes’ like Christ and Cromwell, has since the 1930s been seen as a problematic hero himself. His views on slavery, empire, democracy and the superiority of white people make some of what he wrote unacceptable. His allusions to Homer and Greek tragedy in The French Revolution cannot conceal its antidemocratic attitude to history. He is the sort of erstwhile hero whose public statues are in jeopardy. 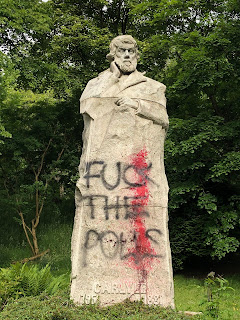 On November 12 I will be dropping in remotely from my Cambridgeshire home to Oxford, to debate with the outstandingly witty and erudite Tom Holland at the University Classics Society: the question is ‘Does the Modern World Need Ancient Heroes?'  I would have had to decline the invitation normally, because the dreaded X3 bus from my town to Oxford takes more than three hours and has no apparent suspension. 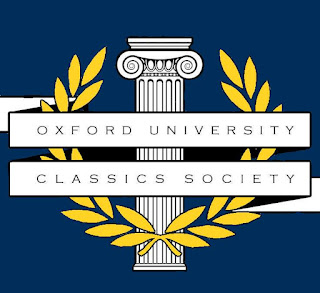 I don’t know how far the invitation to attend will be extended, if at all, to the public. So I’ll report back in a blog who won, while explaining my own view: we don’t need ancient heroes, but we certainly need to trace the genealogies of our cultural foremothers and fathers. And to keep up making our seminars open to anyone with a Zoom link. I get to crack jokes with old mates in three continents in the comments panel.