A Bulgarian field trip for a book on theatre around the ancient Black Sea revealed the delightful Dogheads of Sofia (then Serdica). A relief sculpture illustrates the 4th-century-AD entertainments in the amphitheatre, including a show about Dogheaded Men (Cynocephali) performed by actors cavorting on a stage wearing dog masks. At first I thought they were ape-heads (Pithecocephali) until colleagues in Facebook group Classics International put me right and I magnified the picture to be certain.

The ancient Greeks and Romans believed that real Dogheads lived in the Russian steppes, Libya, Ethiopia and India. Dogheads are said by ancient authors to be the most righteous of all hominids since they neither engage in commerce nor hurt anyone. They understand human languages and communicate back by barking. They live off hunting. They are amazingly swift of foot in the chase. They shred and roast the animals they catch not over a fire but in the sun (which may explain what happened to the hapless boar in the amphitheatre entertainment).

I was amazed to discover devout Dogheads playing star roles in Christianity, especially in connection with Africa and with pondering the definition of homo sapiens. St Augustine of Hippo in Algeria wondered whether Dogheads were admissible to his City of God (16.8), and decided that they were, being rational, mortal and Descended From Adam. Please correct me if I am wrong, but surely this must mean that Augustine imagined that at some point a Descendant of Adam had mated with a dog and produced the hybrid species?

Some Eastern Orthodox icons show St Christopher as a dogheaded Christian convert, originally captured in Libya during Diocletian’s reign. (Such icons were banned in Russia in the 18th century as too disturbing). Dogheads are sometimes encountered by the apostles and converted, or serve in the armies of warrior saints: the famous medieval Psalter of Kiev portrays Jesus in the company of several Dogheads.

You can still spot some today if you live in Scotland, since an Old Welsh poem reports the battle of the Dogheads (Cynvyn) with Arthurian warriors at Edinburgh. Alternatively, move to Wexford County, Michigan, where a seven-foot Dogman with blue eyes was first recorded in 1794 by a French fur trader and reappears every ten years. Michigan Dogman regularly makes lists of the Top Ten Mysterious Creatures in the USA. 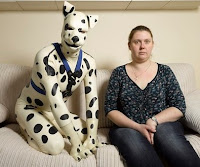 But you may want to be careful about getting too close too soon: Ctesias says that amongst the Indian ones, ‘while the women have a bath once a month, the men do not have a bath at all.’ It may be more pleasant to move in with one of the squeaky clean competitors who like living as dogs in the Mr Puppy Europe society, which, as the Father of My Children and his dog point out to me, convenes in Antwerp every year. 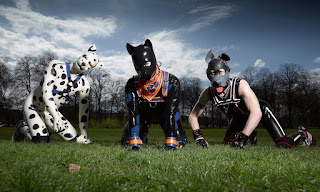 Daft diversion this week has been wondering what bikes the Olympian gods would have ridden if the ancient Greeks had invented the velocipede. I have been moving house to Cambridgeshire with no functioning TV or internet, yet somehow have still been deafened by the national media’s obsession with ‘British supremacy’ at cycling in response to the feats of Bradley Wiggins, Laura Trott etc.

I don’t often pull my northern ancestry card, but it needs pointing out that all three claimants to the title of ‘inventor of the bicycle’ were actually Scotsmen: Kirkpatrick MacMillan, Gavin Dalzell and Thomas McCall. (I do not count Baron Karl von Drais’s silly Laufmaschine, which was not a machine at all, but a pedal-less glorified scooter). MacMillan was a blacksmith from Dumfriesshire who worked, appropriately enough, at the Vulcan Foundry in Glasgow.  His 1839 two-wheeled vehicle really did transmit power from human feet via crankshafts to rotating hubs.

Given that the ancient Greeks, especially Vulcan/Hephaestus, were brilliant at mechanical engineering, I have always been puzzled that they did not invent the bike. Hephaestus, who was club-footed, made himself this elaborate chariot, but still ended up on most vases riding a humble donkey.

So while we unpacked the endless boxes and worried that the cat might head off back to the Cotswolds, I mentally suited pictures of historical bikes to some of the Olympians. Any suggestions for those still missing—Athena, Apollo, Hermes etc.—gratefully received. 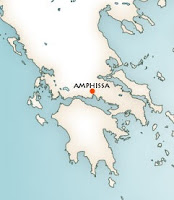 A trip several miles upcountry to Amphissa, mountainous administrative centre of the low-tourist patch of Greece where I am hiding, allowed me to visit at last the scene of an unusual ancient narrative.

In the fourth century BCE, tyrants had taken over Amphissa and installed an army. A band of Thyiads (a special group of Bacchanalian women from Athens and Delphi) had been worshipping Dionysus on the nearby summits. But they got lost (they did this a lot; on another occasion they were snowed in and had to be rescued by mountain rangers). This time they passed out in Amphissa’s marketplace.

The more sedate local wives were concerned that the occupying soldiers would 'take advantage' of their insensible visitors. The women of Amphissa bravely stood all night encircling the Thyiads to guard their sleep. In the morning they fed them and (after demurely securing permission from their husbands) escorted them in safety to the borders.

George Eliot brought this story into popular circulation. The hero of her Daniel Deronda (1876) is reminded of the version in Plutarch’s On the Virtues of Women when he rescues the vulnerable foreigner Mirah Lapidoth. An updated maenad (professional opera singer), she had been threatened with prostitution by the men who should have protected her. Daniel takes her to stay with respectable female friends in Chelsea, the less than obvious Victorian equivalent of Amphissa.

And it was Eliot’s novel which in turn inspired Alma Tadema’s portentous 1887 painting of the same episode.  I like his sleepy Thyiads, but am relieved to be able to report that the native matrons of Amphissa look a good deal more cheerful these days as well as remaining (although I didn’t test it) stalwart in the defence of female honour. I know this because I spent the morning in Amphissa police station (my kind hostess needed to renew her Greek passport to secure her own safe conduct over borders) being impressed by the easy professionalism of a female officer, a modern Woman of Amphissa.

On the eve of the Olympics I find myself at last on holiday for a week, swimming below Delphi. In antiquity the sanctuary here had its own athletics competitions, the Pythian games. My favourite ancient Victory Ode is Pindar's Pythian 10 in honour of a boy called Hippocleas who won the Delphic junior sprint in 498 BCE.

Pindar foresees that, with the garland of victory, Hippocleas will win huge admiration ‘from boys his age and from his elders, and will make the girls notice him.’ Pindar slyly alludes to the next Olympics, hoping that Hippocleas will triumph there, too: he compares the young athlete to Perseus, who could fly through the air on his winged sandals.

August 3 is the eightieth anniversary of the most important sprint of all time, Jesse Owens' 100-metre dash in 10.3 seconds at the Berlin Olympics in 1936. Over the succeeding days he added gold medals in the long jump, the 200 metres, and the 4x100 relay.

Owens' bravura performances cast the Nazi ideology of Aryan supremacy into disarray. He was filmed by Leni von Riefensthal for her documentary, Olympia, but there were rumours that Hitler refused to acknowledge Owens’ victories: Owens himself at different times both confirmed and denied this. Aryanists produced the absurd defensive argument that people of African descent were 'inevitably' physically stronger since they were less far removed from a ‘jungle’ existence than the ‘higher’ races. 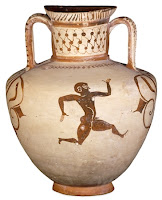 When criticising Nazi racism, we must remember what faced Owens back home: ‘When I came back to my native country, after all the stories about Hitler, I couldn’t ride in the front of the bus. I had to go to the back door. I couldn’t live where I wanted. I wasn’t invited to shake hands with Hitler, but I wasn’t invited to the White House to shake hands with the President, either’.

Owens was a conflicted character, who endured misery as well as glory: a supreme athlete, he chain-smoked and died of lung cancer; a member of the Republican Party, he suffered from the sharpest end of free-market capitalism and was bankrupted; acutely aware of racism, he initially objected to the black power salute after the sprint at the 1968 Olympics. 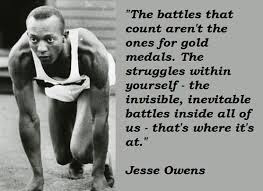 But surely he would have approved of Pindar’s image of Perseus as sprinters’ hero: when asked what mindset had allowed him to win such extraordinary races, Owens simply said, ‘I let my feet spend as little time on the ground as possible. From the air, fast down, and from the ground, fast up.’  Owens could do poetry in prose as well as motion.
Posted by Edith Hall at 13:50 No comments: