Researching the Horrid History of intellectual snobbery, I have this week collected many instances of rich morons who have claimed that offering the Greeks and Romans to working-class people is equivalent to ‘casting pearls before swine’ (Matthew 7:6).  This research has introduced me to Toby, the SAPIENT PIG, OR PHILOSOPHER OF THE SWINISH RACE, who toured pubs in late Georgian England exhibiting his prodigious intellect. The frontispiece to his autobiography The Life and Adventures of Toby the Sapient Pig implies that the learned swine’s preferred reading was Plutarch.

Toby’s excellent literary taste suggests that he or his entrepreneurial owner had read my favourite essay by Plutarch (best known for his Lives of famous Greeks and Romans), the Gryllus. This stars a brainy ancient hog whose name means ‘Grunter’. Gryllus conducts a delightful mock-Platonic dialogue with Odysseus and Circe. He has been transformed into a philosophical pig and does not want to be changed back into a human.

The British showed their intellectual superiority over the French in 1751 with another classically educated animal. When Le Chien Savant (or Learned French dog, a small poodle-ish she-dog who could spell words in French and English), arrived in London, she was trumped by the New Chien Savant, or learned English Dog, a Border Collie. The triumphant English Dog toured Staffordshire, Shrewsbury, Northamptonshire, Hereford, Monmouth and Gloucester as well as the taverns of London. She had clearly been to canine Eton, since she knew the Greek alphabet, could spell PYTHAGORAS, answer questions about Ovid’s Metamorphoses, and was an expert in ancient history.  She could mind-read. She was advertised as possibly being a latterday reincarnation of Pythagoras the ancient Greek philosopher himself.

I'm sad that I was born too late to witness either the Learned English Dog or Toby the Sapient Pig in performance. But I have learned from researching them. Knowledge of ancient Greek and classical authors, including the (by no means lightweight) Ovid and Plutarch, was absolute proof of the prodigious intelligence of an animal. This Is in turn  telling evidence of the degree of difficulty—and therefore cultural prestige in financial and class terms—associated by the provincial inn-going public with such an educational curriculum.

The poet Thomas Hood saw that no amount of learning could ultimately save a pig—or a lower-class human—from being sacrificed in the interests of the voracious ruling class. His Lament of Toby, the Learned Pig, woefully concludes with the poor porcine, despite being crammed with Classics at Brasenose College, Oxford, being fed and readied for slaughter:
My Hebrew will all retrograde
Now I’m put up to fatten,
My Greek, it will all go to grease,
The dogs will have my Latin!


Food for thought, especially for a born-again vegetarian.
Posted by Edith Hall at 19:30 1 comment: 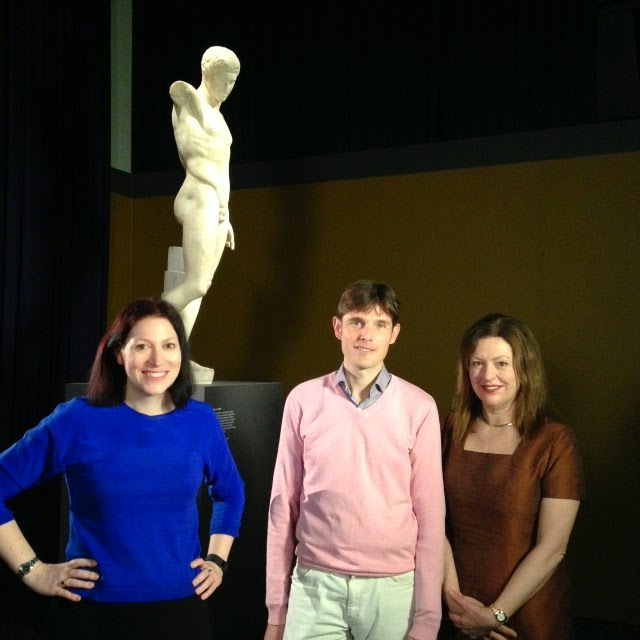 The ancient Athenian equivalent of Mother’s Day? The Lesser Eleusinian Mysteries. These took place in March. They celebrated the springtime return to the goddess Demeter of her daughter Persephone from her rapist/ husband Hades in the Underworld. 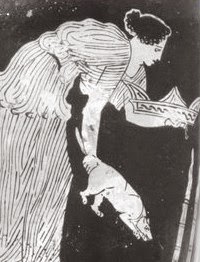 Eleusinian celebrants sacrificed a piglet. This is not something I will be doing this year. After seeing a pitiful lorryload of mammals being taken to an abattoir, I have this week had one of my several (hitherto embarrassingly shortlived) conversions to vegetarianism.  The last time was in Australia in 2011 when I was offered a steaming plate of kangaroo stew after visiting a marsupial park and shaking paws, eye-to-eye, with one of its residents.

My intermittent revulsion against sinking my canines into the flesh of other animals will probably also prevent me from accepting this week’s invitation from the North Cotswold local press. If I do attend the annual Moreton Pig Show, I am promised a chance to Guess the Weight of “the magnificent British Lop Boar named Pastie” and witness the Marquess of Salisbury, President of the British Pig Association, bestow trophies on the victorious swine. I hope he won’t imitate whatever ritual this ancient Egyptian is performing in Saqqara tomb art (suggestions welcome in the Comments section).

As an urban leftie, stranded for love in a reactionary rural backwater, this is where I draw the line. The Marquess, universally said to be delightful, is just not my kinda guy. He alighted from Eton effortlessly in Oxford to achieve a Third Class degree. He has a vast personal fortune. His appointments have included Merchant Banker, Tory MP, Peer of the Realm and now breeder of Ginger-Haired Tamworths. 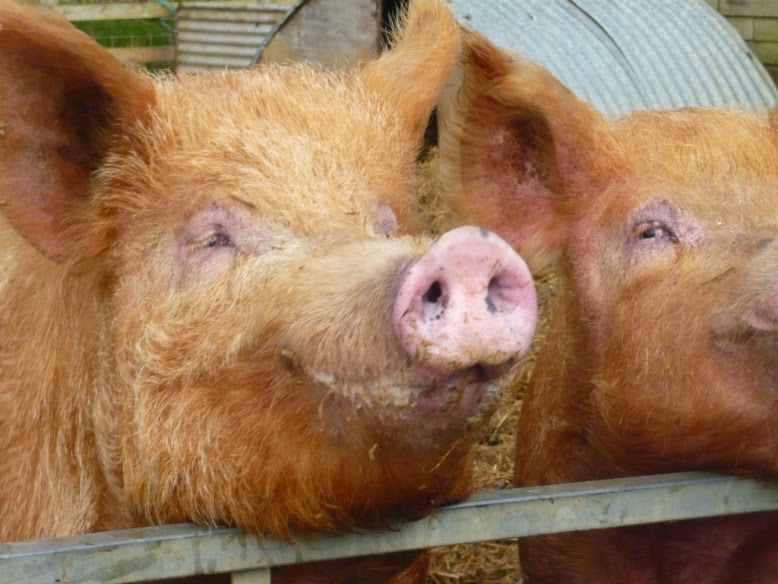 In 2011 he told the Financial Times that politics was much “easier” than pig-keeping. “I regard politics a bit like fox-hunting; there’s nothing more serious while you’re doing it, but there is [sic] always buttered eggs for tea afterwards.”

It is very good to be thus reassured about the intellectual prowess of our hereditary ruling class.

I can't quite follow the analogy between fox-hunting and politics myself, but then I have never regarded myself as gifted enough to govern the populace.

Although I probably won’t go to the porcine prize-giving, I will take up the buttered egg suggestion. Currently I doubt if I’ll ever be able to face another bacon sandwich.
Posted by Edith Hall at 10:50 2 comments:

Excavating NIMRUD: Lest We Forget

Nimrud is one of the four great cities of the Assyrians built between 2000 and 700 BC within a small region of the Tigris valley in what is now North Iraq. The world heritage site, currently being bulldozed from the face of the earth, only re-emerged from its depths between 1845 and 1851. It was dug up by Iraqi workmen under the direction of Briton Austen Henry Layard.

Layard originally thought Nimrud was the biblical Nineveh. His bestselling book was erroneously titled Nineveh and its Remains. Yet Layard’s Nineveh was the first archaeological blockbuster in English, and in abridged form one of the first six books published in 1852 in the imprint Murray’s Reading for the Rail sold at  W.H. Smith  station bookstalls.

When the astonishing Assyrian remains arrived at the British Museum, Layard became a national hero. The press went wild. Queen Victoria donated money to the archaeological fund. Assyrianised guardian-monsters appear in John Tenniel’s 1865 depiction of the Mock Turtle and the Gryphon in Alice’s Adventures in Wonderland. Kipling uses the model of Nineveh in the poem which produced his most famous line, ‘Lest we forget!’

Nimrud and Nineveh mattered because Christian Victorians desperately needed confirmation of the historical veracity of the bible, including its statements that the Israelites had dealing with the people of Assyria and Mesopotamia. Nineveh had after all, according to Genesis 10.11, been founded by a descendant of Noah and Shem called Assur. The new science of Biblical Archaeology allowed the literal truth of the bible to be defended against allegorical interpreters, and subsequently Darwinian doubters, on new terms. The material history of the Judaeo-Christian religions was not only emerging from the deserts of Mesopotamia, the birthplace of these faiths, but arriving in central Bloomsbury. The working-class Victorian autodidact and clergyman John Relly Beard was typical when he used Layard’s discovery of the cities named in connection with Noah in the Old Testament to defend its historicity against contemporary geologists’ attempts to disprove the universal deluge.

I do not know whether the Islamic State bulldozer drivers consciously connect Nimrud and Nineveh with Judaeo-Christian self-definition. I do not know how explicitly they associate them with the western imperialism which allowed Layard and later generations of European and  American archaeologists (including Agatha Christie's husband Max Mallowan) to take by far the majority of the detachable objects away from their Mesopotamian home westward to infidel museums. But perhaps they see, or subconsciously intuit, representations of the ancestors of the other Abrahamic religions in the stony faces they are smashing of Nabu and Ninurta, Assyrian gods of written records and of victory respectively.

If so, then their hatred, although no less terrifying and its results no less of a catastrophic outrage, may be just a little easier to understand.
Posted by Edith Hall at 11:36 No comments: