On Being Able to See Again Now and in Ancient Athens

My second-last blog was written at my worst low for three decades. Professional problems have been compounded by eyesight hassles, and these are now—it feels miraculously—over. I have several much loved friends with incurable eye problems and the contrast makes me humble and triply grateful.

I'd suffered from galloping myopia since infancy, and from dodgy retinas and cataracts for three years. My optician and doctor could not understand it since at my age refraction should be going the other way. In March I was down to minus 19.5 diopters; on top of distance fogginess that no contact lenses or glasses could correct I was finding it increasingly difficult to read.

Fortunately my friend from 1978, Cathy Williams, is a consultant eye doctor. She recommended the best retina specialist in the world, Alistair Laidlaw, a true descendant of Asclepius; the first Greek doctor got his name from his first patient Ascles, ruler of Epidaurus, whom he cured of a previously untreatable eye condition.

There are many blindness stories in ancient Greek myth. I was not helped by Metope, whose father blinded her when she had a love affair, and said he would not restore her sight until she had ground grains of bronze as fine as flour.

More encouraging was Orion, whose blindness was cured when he was led by the dwarf Orion towards the rising sun; I've written about him recently in a magnificent volume on disability in antiquity edited by my KCL colleague Ellen Adams. And in drama, the blind titular character of Aristophanes’ Wealth is cured after overnighting at the sanctuary of Asclepius in Piraeus, where two snakes lick his eyelids back to health. 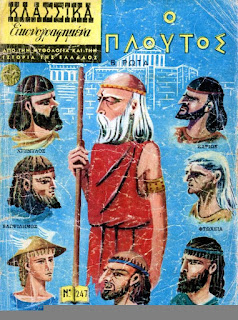 I was anaesthetised so I don’t know whether snakes were involved. But after two operations I have 20/20 vision for the first time in my life, can read perfectly, and (more importantly) be sure the man entering the bedroom with tea in the morning is actually my husband.

It is impossible to express the difference this has made. I feel now not only optimistic about the future, but more vital and powerful and brave than ever in my life. I am sleeping far better—I think I had always been afraid that I would not be able to defend myself if rudely awakened. I had always been terrified of an apocalypse in which contact lenses and glasses became unavailable, and of suffering the fate of poor shortsighted Piggy after his glasses are broken in William Golding’s Lord of the Flies (a novel much influenced by Euripides' Bacchae).

So what do I do now, besides saving hundreds of pounds a year at Spec-Savers? I am taking my cue from the beautiful eye votives dedicated in antiquity. A man named Praxias set one up for his wife in the Athenian Asclepieion in the fourth century BCE. Another was nicked from near the Pnyx Hill by Lord Aberdeen but ended up in Lord Elgin's hands; he sold to the British Museum along with the Parthenon sculptures. The great Manchester Uni epigraphist Peter Liddel, who with Durham's Polly Low is editing the inscriptions in the British Museum, excitingly tells me that the person who dedicated it to Zeus, Philemation, was probably a woman, perhaps a freedwoman.

My new superpower reminds me of the Argonaut Lynceus, whose sight was so acute that he could see through walls, trees, boulders, darkness, and into the Underworld. Aristotle played with the idea that Lynceus could see through skin to ascertain the true moral worth of a human being. I've always been rather trusting and over-inclined to assume people’s motives are good. A warning to all speciously smiling agents of darkness: perhaps my psychological antennae have improved as much as my eyesight.