It was a matter of urgency to travel back south from Scotland yesterday, the night  Britons officially enter the Months of Murk and millions become catatonically depressed. Since our rulers insist (for no good reason[i]) that daylight is more important at breakfast than in the late afternoon, British Summertime is officially suspended. In Scotland, the midwinter sun sets at an obscene THREE O’CLOCK in the afternoon.

Seasonal Affective Disorder was not recognised as a medical condition until 1984. But there is a resounding reference to it in the Odyssey book 11. The hero describes how he found the entrance to Hell in the land of the Cimmerians, their land and city ‘swathed in fog  and cloud. The shining sun never looks upon them with his beams when he climbs the starry heavens or when he turns again to earth from heaven, but ruinous night is spread over mortals, causing them misery’. On January 2 2004 I experienced a day in the city of Durham in the far north of England when because of rainclouds it never got light at all. It was like a portent in a Senecan tragedy.  Cimmerian Durham had clearly been visited by Odysseus before me and, like him, I needed to get out of there.

One of the stupidest questions asked by scholars of religion is Why did Roman Soldiers in Britain like the mystery cult of Mithras so much? The answer is patently obvious to anyone with S.A.D. The soldiers on Hadrian’s Wall near Durham came from lands like France with slightly more claim to perceptible winter afternoons. The darkness of northern Britain compelled them to cultivate the hero who slays the Bull of Darkness and brings back the Invincible and Unconquered Sun. Like another famous hero, Mithras was born on Dec. 25, which meant that the Gaulish squaddies could hold a party around the shortest day of the year.

My four-point plan for survival this winter is this (NB fellow sufferers, those UV lamps DON’T WORK!):

[i] The opinion of unspecified ‘farmers’ is usually cited. No farmer I know could care less, since cows don’t use clocks.
Posted by Edith Hall at 12:37 2 comments:


As someone of Scots ancestry, who likes swimming, eating fish and sometimes drinking like one, I have an over-determined interest in Alex Salmon[d] and his deputy Nicola Sturgeon. Their Scottish National Party offers the lucky inhabitants of Scotland a just-about credible alternative to the ”plebs”-despising Tories and the craven, mendacious Labourites.

But something fishy is going on. It is almost inconceivable that the top two people in such a small political outfit should both be called by the names of fish beginning with ‘S’, especially when most people in Scotland have names beginning CAM (Cameron, Campbell) or MAC. This forces me to ask whether we can trust Mr Salmon[d]. He and Ms Sturgeon are universally agreed to be canny politicians, but is that enough?

In Greek mythology the hero called "Salmon" (Salmon[eus]) was a megalomaniac. He commanded his people to worship him under the name of Zeus.  In order to heighten his resemblance to the Top God, he drove his chariot over a bridge made of brass to imitate the sound of thunderclaps, while throwing torches into the air as fake lightning. Zeus destroyed both Salmon[eus] and his people with a real thunder-bolt, which is not a fate I want the Scots, whom I have always liked, to share.

Yet in Scots/Irish mythology (surely more relevant here), the Primeval Salmon ate nine hazelnuts that fell into the Well of Wisdom, thus gaining all the knowledge in the world and benefitting his people. Alex Salmon[d] looks just like a fish with hazelnuts stuffed in his cheeks: is he actually the ancient Salmon of Wisdom, returned to rescue his people?

If so, what about Ms Sturgeon? The portents are also ambivalent here. Many scientists think that the legend of the Loch Ness monster arose from sightings of a massive Ocean Sturgeon. Moreover, female sturgeons have been known to devour whole male salmon at a gulp. Alex Salmon[d] had better watch his back fins. Yet native Americans legends represent the sturgeon as the most ancient and benign cosmic companion of Homo Sapiens, so we should probably trust that Ms. Sturgeon is not trying to use a Scottish Ichthyocracy merely as a stepping-stone to a brutal Matriarchy after swallowing her leader whole.

Could being taken over by fish actually be good? According to Oppian, who wrote the oldest surviving treatise on fishing (although it was written in Greek it is known by its Latin title de Halieutica), fish are certainly wily, but they are also admirably loyal: ‘in a spirit of helpfulness’ they ‘rush to help other fish struggling on hooks and chew through the line’; adult fish act as decoys when the young and vulnerable are under threat;  boy fish are gallant and fight hard to save the pregnant girls. Utopia!

I am therefore inclined, for now, to give the suspiciously piscine Salmon[d] & Sturgeon the benefit of the doubt. If they win that referendum in 2014, I shall, moreover, move to Scotland and change my name to [Red] Snapper

Social historians try to deny the historicity of le droit de Seigneur–the right of the Sir, Sire or feudal overlord  to deflower all pubescent virgins. In George Orwell’s Nineteen Eighty Four this jus primae noctis was propaganda with which children were indoctrinated about the oppression from which the revolution had freed them: they were no more subject to ‘the law by which every capitalist had the right to sleep with any woman working in one of his factories’ (I ch. 7). Hooray!

Yet, for several decades, the modern equivalent of the feudal overlord or the capitalist factory-owner, a media superstar called Jimmy Savile, subjected hundreds of very young women to routine sexual  harassment (allegedly). Lots of people knew about it; some reported it; but nothing was done. He became a Seigneur or 'Sir', his knighthood a weird acknowledgement of his URTMWI (Universal Right to Molest With Impunity). Droit de Seigneur still functions in every human group exploiting the power of televisual personalities and messages: a BBC factual programmes producer of repulsive appearance proposed to me in 1991 that if I performed a sexual act on him he could make me famous. When I refused, he got nasty. 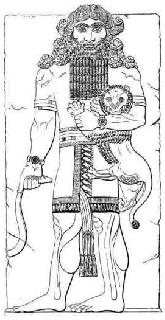 Men with power but no commitment to human rights have always felt entitled to be rewarded in sexual currency just for being powerful. The hero of the oldest recorded literature, Gilgamesh of Mesopotamia,  imposed droit de Seigneur on the terrified brides of Uruk until his best friend Enkidu pointed out that he was being tyrannical.[i]

It would be nice to think we had moved on since 6000 BC. But there are not enough Enkidus around.  Some male dons at Oxford in the early 1980s, when men-only colleges were newly open to female students, could not resist the potential of the power relationship between them and the 18-year-old women now sitting in their studies reading out essays on ‘Manliness in the Iliad’.

I only attended the first of 16 tutorials on Homer. The groper responsible for this lacuna in my education (not a tutor at my own college) never reported my absence because he didn’t want the reason for it to be discovered. It was for the same reason but with a different individual that in my third year I gave up Ancient History after a distressing tutorial on Sparta and changed to Classics and Modern Languages. Moreover, I can absolutely guarantee that it would have been my reputation and career that would have been damaged if I had made a fuss, rather than those of the (now deceased) Lothario.

[i] .  This blog was inspired by my waking up trying to make GILGAMESH an anagram of JIMMY SAVILE but only got as far as JILVAMES—perhaps an Assyrian variant spelling?
Posted by Edith Hall at 12:21 4 comments: 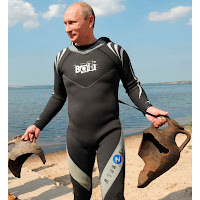 So Russian politics’ challenge to James Bond was born 60 years ago on 7th October 1952. He lived  for 37 under the Soviet regime and has not realised that state tyranny is tacky.  But his redeeming feature is that his action-hero image is entertaining. All dictators should be required to work out,  fly around with flocks of endangered birds, strip off, shoot things and scuba dive for classical Greek vases in the straits between Phanagoria (in the Russian Empire zone) and the Ukrainian Crimea (which no longer is). 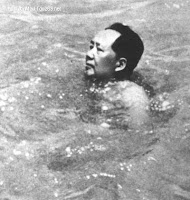 Even the Kremlin admits the vases were planted. But that can’t erase the memory of Putin  emerging from the Black Sea, taut-muscled and dripping (one in five Russian women say they want to marry him). He is one in a long line of tyrants who have enjoyed demonstrating their mastery over water. Emulating the heroic mythical swimming feats of Odysseus, Theseus and Turnus,  Julius Caesar claimed to have swum the Nile delta,  Mao Zedong the Yangtze in 1966, and Saddam Hussein the Tigris more recently.

But my point this week is this: for every megalomaniac who has made it to the top in world history, many more have failed. Putin shares his natal day with the nastiest Roman  Emperor-who-never-was, the adoptive descendant of Julius Caesar, i.e. Drusus Julius Caesar (born 7th October, 13 BC). Putin even looks like him. The biological son of the Emperor Tiberius, Drusus was a notable bully.

He won admiration for bloodily putting down a rebellion in Hungary (according to Cassius Dio he ‘persuaded’ some rebels to hand over their comrades in a crude demonstration of divisa et impera). He was exceptionally violent (the sharpest swords were called ‘Drusian’ after him), insolent, ‘lewd’ and ‘licentious’: even his decadent father had to rebuke him for his outrageous conduct.

For kicks, Drusus organised lethal gladiatorial combats in which he forced members of the equestrian class to participate. He made a morbid hobby of coffin-bearing at funerals, beat so many people up that he was nicknamed Castor after the god of boxing, and was regularly so drunk that (like the loutish Etonians I was at university with) he set off fire alarms. He makes Nero look sane and humane. 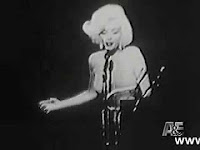 This ancient tough guy was unsurprisingly known to be unkind to creative artists who annoyed him. If the members of ‘Pussy Riot’ are thinking of composing a punk-feminist version of  Marilyn Monroe’s legendary ‘Happy Birthday Mr President’ (which they would be good at and the  world certainly needs), they should remember the fate of the hapless poet Gaius Lutorius Priscus.  Having made excellent money out of a previous royal obituary, he began writing his panegyric for Drusus when the heir apparent was ill but still hadn’t actually died. Lutorius would have been grateful, I imagine, for a trial (however ‘kangaroo’ the court) and two years’ hard labour: instead he was summarily executed.

Putin should  remember, as he requires his subjects to celebrate his birthday, that  Drusus (poisoned at the age of 36 by his wife) has not been much praised by posterity.
Posted by Edith Hall at 19:50 1 comment: