The older I get, the more I am moved by the plight of other fauna on the planet in the face of human rapacity. One of the week's most disgusting news items was the inaugural online auction of rhinoceros horn, held by South African millionaire rhinoceros horn farmer John Hume.

Who does not feel atavistic guilt and melancholy looking at the 39,00-year-old woolly rhinoceros found in eastern Siberia in May, one of the many species of megafauna exterminated by our hunter-gatherer ancestors? Only a few millennia later, some of them created thrilling portraits of some of her close relatives in Chauvet, southern France.

The rhinoceros had lived alongside Neanderthal man in prehistoric Thessaly, but by the classical era the European rhino was long extinct. Aristotle had heard of them, probably through accounts sent by Alexander’s army in the east, and the occasional Egyptian-Greek amulet shaped like a rhinoceros has turned up. But the brutal exploitation of the rhinoceros can clearly be seen in ancient Rome, where it became the star of the amphitheatre.

The rhinoceros features in accounts of wicked Emperors’ depravity: Commodus liked to slaughter rhinoceroses personally, at no danger to himself. Caracalla revelled in rhinocericidal spectacles as well.  Domitian had been particularly keen, even stamping a rhinoceros on coins to remind his imperial subjects of the lavishness of the games he had provided.

The poet Martial’s poems on Domitian’s rhinoceros fetish are heart-breaking. Since this magnificent beast is vegetarian, and temperamentally placid, it proved profoundly disappointing in the shows when animals were meant to tear each other apart to gratify the audience. So the rhino had to be tortured into losing its temper and attacking other animals. But then it could toss two oxen in the air,  terrorise a lion, or vanquish a great brown bear.

The rhinoceros, all 3,800 lbs of it, can indeed charge an adversary at 30 mph. John Hume’s rhinoceroses can’t toss their assailants, of course, because he has removed and auctioned their horns. But I for one would not be sorry to see him face a herd of them, furious, in an arena. Perhaps a new form of the ancient venationes (hunting spectacles) could be invented specifically to punish humans convicted of cruelty to animals.
Posted by Edith Hall at 15:42 7 comments:

Spartacus in Haiti and Lancashire

23 August is the annual International Day for the Remembrance of the Slave Trade and its Abolition. UNESCO chose the date because it marks the beginnings of the momentous 1791 slave rebellion on St Domingue (Haiti).

Enslaved Africans spread fire across a thousand plantations. In 1794 the French National Convention voted to abolish slavery throughout all territories of the French Republic. Although Napoleon later repealed this measure, the fact that it had been passed at all was instrumental in the eventual abolition of the European slave trade altogether.

The leader of the rebellion was Toussaint L'Ouverture, known as The Black Spartacus. He had been inspired by the portrait of the ancient rebel gladiator Spartacus in Plutarch’s Life of Crassus. 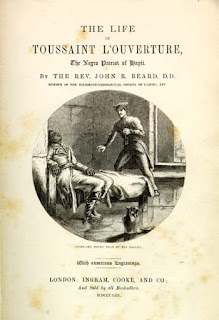 L'Ouverture’s importance was brought to its widest English-speaking audience by a biography written by the Reverend John Relly Beard (1853), not coincidentally the Victorian most committed to bringing classical education at the highest level to all working people. A passionate Lancashire Unitarian minister, he was a crucial force behind the movement for popular education.

He proudly addressed this to ‘the uneducated’,  his stated purpose ‘to simplify the study of Greek so as to throw open to all who are earnest in the great work of self-culture. Nor need any industrious person of ordinary capacity despair of acquiring skill to read the New Testament; and if he pleases, and will persevere, he may go on to an intimate acquaintance with Xenophon, Demosthenes, Thucydides, Homer, and the other Greek classics'.

An estimated 21 million people, shockingly, are slaves across the planet today, and 13,000 in Britain alone. You can find out more at the Global Slavery Index. Its famous-face patron is none other than gladiator-impersonator Russell Crowe.

In 2012 there was a French TV serial about L'Ouverture, sadly unavailable with English subtitles. Surely it’s time for a major-budget blockbuster movie, with Crowe as Napoleon.  David Oyelowo, the best Prometheus in Aeschylus I’ve ever seen (see pic), is an obvious candidate for L'Ouverture.
Posted by Edith Hall at 12:11 No comments:

Some Classical and presidential Left-Handers 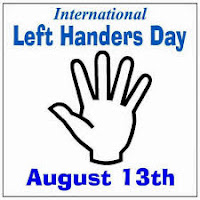 August 13th is the 28th International Left-Handers’ Day.  The usual journalistic response is to point out the disproportionate number of US Presidents who have been left-handed, including Thomas Jefferson, Herbert Hoover, Harry Truman, Gerald Ford, Ronald Reagan, George Bush, Bill Clinton and Barack Obama.  Few of those succeeded, within 8 months in office, in threatening us with nuclear war and Nazi rallies, so perhaps the Americans’ great mistake last November was to elect a right-hander.

For light relief let’s look at some of the rare indications of left-handers in antiquity. A papyrus in Göttingen contains a letter written by the clearly left-handed  Aurelius Victor, a post office accountant in Oxyrhynchus. The experts can tell this from the contorted way he pens his lambdas.  A vase in the Louvre depicts FOUR mysteriously left-handed lyre-players. This could at a pinch be an artist’s mistake, but I like to think that the artist was left-handed and paying himself a secret compliment. 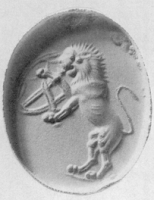 Left-handedness is often thought to be correlated with high IQ. Aristotle is sometimes said to have been left-handed simply because he was fascinated by the natural differences between left- and right-handed children. Plato said that we are all by nature ambidextrous, but that through ‘the folly of nurses and mothers’ we lose power in one hand: this causes problems in warfare if anyone ends up left-handed. If you think about the hoplite phalanx you can see what he means, so I’m intrigued to find a left-handed hoplite lion on a lovely Greek gemstone in the BM.  Shield on right paw and sword held in left. 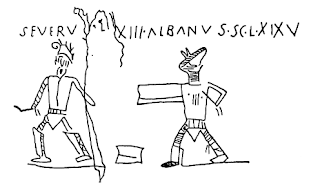 A left-handed gladiator, however, was at an advantage if fighting a right-hander, because his opponent might have had little opportunity to train against left-handers. The Emperor Commodus (the one in the movie Gladiator) liked to boast about his left-handed gladiatorial prowess.   Albanus, the figure on the right in this graffito from Pompeii, is a left-hander fighting the right-handed Severus, and the abbreviation SC. after his name represents SCAEVA, ‘left-hander’. 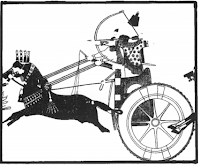 Assyrian kings liked to be portrayed fighting from chariots, but in only one such portrait, a wall-painting from Til-Barsip near Aleppo in Syria, is a left-handed king portrayed. He holds the bow in his right hand, and his sword is sheathed on his right. He is probably the obsessive astrologer Esarhaddon, who reigned from  681 – 669 BCE.

The most famous ancient left-hander was Gaius Mucius, a Roman citizen who volunteered to assassinate the hostile Etruscan king Lars Porsena in 508 BCE. He was not very bright and accidentally killed the wrong man. He was captured. To show how brave Romans were, he shoved his right hand into a sacrificial fire and did not cry out. Porsena was impressed, freed him and sued for peace with Rome.  So our newly one-handed hero was given the honorary cognomen Scaevola or ‘Left-Handed’.
But I can’t finish without pointing out that one ambidextrous U.S. president, Andrew Garfield, could simultaneously write the same sentence in Greek with one hand and Latin with the other. This was impressive because he had risen from abject poverty.  It sadly did not prevent him serving for less than a year; he was assassinated in the September of 1881 only months after entering office.
A pity. Those were the days when U.S. presidents still said things like ‘Next in importance  to freedom and justice is popular education, without which neither freedom nor justice can be permanently maintained’. How Times Have Changed.