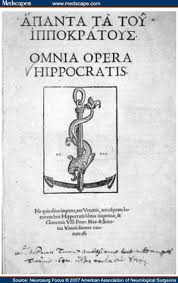 The remains of this patient show that complicated surgical procedure on bones of the skull, including trepanation (the removal of a disc of bone to allow the extraction of damaging bone splinters) was already in use before the first philosophers and more than two centuries before the sophisticated treatise On Head Wounds, attributed to the physician Hippocrates, was written in around 400. The intellectual approach of the Hippocratic treatises, and their concern with inference, evidence, cause and effect, without recourse to supernatural causes, was one of the godparents of the Greek ‘miracle’.
But as I think about that woman’s cranium I can’t help wondering about her treatment. Did she ever get her painkillers and water, her ancient equivalents of antibiotics and tetanus, or have her vital signs observed? Could her porter find the way to Ophthalmology?  We must assume so, since she lived for another twenty years. I am going to be fine, but my ‘disappearance’ in the hospital bureaucracy means that this is more by good luck than good management. It is a sad day when I would rather be treated in Abdera General Hospital in the late archaic age than in the British National Health Service of the twenty-first century.
Posted by Edith Hall at 09:07 1 comment: