Can The Most Tragic Tragedy, Trojan Women, be Turned into a Comic?

Here is a first draft of my review of Anne Carson and Rosanna Bruno's Trojan Women: A Comic, which appeared in a paywalled version in TLS on 20 May 2021. 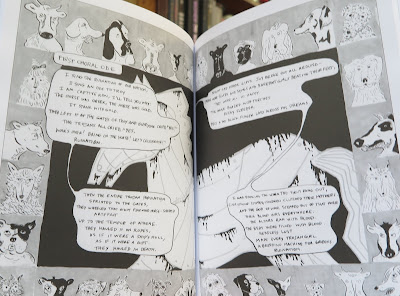 It is an exciting moment when Anne Carson collaborates with the cartoonist Rosanna Bruno, renowned for The Slanted Life of Emily Dickinson (2017), on the Euripidean play identified in antiquity as the most heartrending tragedy ever written. Audience responses still reveal the unparalleled affective power of the scenes where Andromache’s baby Astyanax is torn from her arms and prepared for burial by his grandmother Hekabe.

The play’s reputation has created a subterranean impact. When Philip Sidney championed theatre in his Defence of Poetry (1581), he used a story from Plutarch’s Life of Pelopidas to illustrate tragedy’s emotive moral instrumentality: the murderous tyrant Alexander of Pherae was forced to leave the theatre when moved by the ‘sweet violence’ of the depiction of the sorrows of Hekabe and Andromache. Alexander realised it would not be expedient for his subjects to see him weep. This Plutarchan anecdote, in conjunction with an itinerant actor’s description of Hecuba, suggested to Shakespeare’s Hamlet the very idea that ‘the play’s the thing / Wherein I'll catch the conscience of the king.' Claudius must leave the theatrical production at his court because it hits, as Euripides' Trojan Women had done long ago, far too close to home.

This tragedy’s monumental standing makes Carson’s decision to rewrite it as ‘A Comic’ (the subtitle) provocative and risky. When children are meeting brutal deaths and almost every female is a rape victim, playing with generic fire requires exceptional judgement. Carson once worked in the graphic art world; despite the success of her previous welding of another canonical Greek tragedy, Sophocles’ Antigone, to comic book format in Antigonick (with artist Bianca Stone, 2012), the unrelenting focus of Trojan Women on war crimes induced scepticism in me, exacerbated by the cover. It both intimates Bruno’s debt to the Gothic visual idioms of Emily Carroll’s horror stories in her bestselling graphic novella Through the Woods (2015) and announces that the tragedy will be enacted zoomorphically: a seductive fox in high heels (Helen) stares at a dejected elderly dog (Hekabe).

My trepidation grew as her Poseidon flippantly alludes to Hotel Troy (a former sanitorium in North Carolina featuring Classical Revival architecture), to a (pay-walled) poem about James Baldwin by the darling of US High Poetry circles  Frederick Seidel, and to classicist Robert Graves’ 1929 World War I memoir, Goodbye to all That. I prefer my art less cluttered by displays of intertextual bravura. Yet I had been converted by the last page, where Hekabe stares through the smoke swirling upwards from the ashes of her ‘deleted’ civilisation, concluding, ‘Start me up, left leg, forward to the day of slavery. We can’t go on. We go on’.

For Carson soon concentrates on the unique tonality of Euripidean tragedy.  It is well-known in theatre circles that while Aeschylus and Sophocles have inspired new masterpieces of literary translation, in English alone by such titans as Heaney, Hughes and Harrison, Euripides’ slippery, genre-transgressive, vivid and demotic bravura has rarely found an adequate stage translator. Euripides’ theatrical verse was already acknowledged by Aristophanes, and subsequently by Aristotle in both his Poetics and Rhetoric, to sound like ordinary people engaged in spontaneous, idiomatic conversation. Euripidean diction, especially in rapid-fire dialogue, turns out to be suited to speech-balloons. The triangular altercation between Menelaus, Helen and Hecabe works particularly well. But the ancients also celebrated Euripides’ lambent lyric poetry, which was excerpted and performed at concerts and symposia into the Roman era. Carson rises effortlessly to the challenge of the Trojan widows’ magnificent epitaph for their homeland, ‘sacred Pergamon itself,/rivers of Ida washed by running snow,/sheer cliffs at dawn ablaze with holy light’.

Another characteristic of Euripidean tragedy is sudden lurching between agony and absurdist humour. The best joke in his oeuvre occurs in this very play, when Hekabe, fearing that Menelaus will be seduced by Helen into sparing her life, begs him not to sail back to Greece with the legendary beauty on the same ship. ‘Why?’, he asks in the Greek, ‘has she put on weight?’ The image of a now-obese sex kitten threatening to sink one of Menelaus’ Spartan triremes, occurring at a moment of utter despair, is a quintessentially Euripidean use of humour to throw pain into relief. Carson does justice to this memorable line, and takes inspiration from its tone throughout.

The rhetoric Euripides gives his dramatis personae characteristically edges dangerously near to parody as it punctures ways in which individuals delude themselves.  Cassandra’s coping mechanism, when chosen to be Agamemnon’s concubine, is to argue that the defeated Trojans have actually emerged better from the war than their conquerors (Carson’s text here resonates in our era of alternative facts and fake news). She ecstatically orders the womenfolk to celebrate her bridal, as the only character to have a visual persona in fully human form (a gangling teenager with long hair and an inane grin). The wedding announcement is illustrated by my favourite frame in the work, depicting a copy of a magazine called TROJAN BRIDE, A LOVE AND WAR PUBLICATION. It trails ‘10 tips on treating him like a king’, ‘14 clever wife hacks’, and ‘Axes: The Perfect Accessory’, in a wittily assonantal allusion to Cassandra’s boast that, once arrived in Greece, she will destroy Troy’s destroyers.

An example reinforcing this feminist argument  is the ‘trad wife’ Andromache’s eulogy of her own compliance with ideal feminine virtue as dictated by patriarchy. Euripides makes modern audiences squirm when Andromache boasts that she always stayed at home, renounced female friends, and kept quiet, modest and docile in front of her husband Hector. The response of Carson and Bruno is to portray Andromache (represented by a poplar tree, of which more anon) in two frames on facing pages, her branches in one uplifted and in the next drooping, as her self-affirming rhetoric fails to comfort her.

There have been many classically inspired graphic-narrative renderings of ancient myths and history. Classicists like to claim that they were adumbrated in antiquity by e.g. Oxyrhynchus Papyrus 2331, containing a poem about the superhero’s labours, adorned with coloured line drawings of the Nemean Lion episode. The 20th century saw the emergence of a rich seam of male-focussed comic-book versions of classical narratives concerning heroic escapades, epic quests and ancient battles, now being academically mined in, for example, George Kovacs and C.W. Marshall (eds.) Classics and Comics (OUP 2011). But female-focussed examples have been thin on the ground, even since Alison Bechdel’s exquisite use of the Odyssey in Fun Home: A Family Tragicomic (2007). And combining a female focus with a refusal to limit the graphic representation of an ancient tragedy to anthropomorphically drawn characters is rarer still.

Depicting Hekabe as a newly homeless canine matriarch was an obvious choice, given the ancient tradition that she was  transformed at the ‘Sign of the Dog’, Cynossema, a promontory at the narrowest part of the Hellespont. Dante, one of Carson’s favourite authors, speals of Hekabe as ‘driven mad by sorrow and barking like a dog’ (Inferno 30.19-20). Half Carson-Bruno’s chorus of Trojan Women are also depicted as dogs, while the remainder are cows: this is reminiscent of the lauded public cattle herds of Troy that grazed outside its walls as well as the dogs that Homer tells roamed at Priam’s gates. The abuse suffered by the women comes over with strange pathos in the animal mugshots, complete with convict-boards daubed with inmate numbers, on the page portraying the chorus’ first entrance. These stranded domesticated animals are contrasted with the  feral, ‘foxy’ Helen, a Reynardian antiheroine in false eyelashes (although later morphing into a vanity mirror), who has developed a different strategy from Andromache’s for surviving under patriarchy: as an ancient Greek proverb had it, ‘the she-fox masters the ox’.

The Greek soldiers, on other hand, are malevolent cats and crows, the artwork suggestive of the burlesque epic Batryomyomachia (Battle of the Frogs and Mice). Talthybios, the Greek herald forced to expedite his overlords’ dirty work, is a bedraggled crow (here the comic is influenced by Ali Smith’s exquisite picture-book for young readers, The Story of Antigone (2016), narrated by a Theban crow, although this Trojan Women is far too allusive and too explicit for children).

Remaining characters, however, are not even zoomorphic. The unintelligent but elemental Poseidon is represented by an enormous wave. The masculine Athena is symbolised by a pair of workman’s overalls and an owl’s mask. Menelaus is a phallic-looking piece of machinery, ‘some sort of gearbox, clutch or coupling mechanism, once sleek, not this year’s model’. Andromache is a slim poplar, split down the middle, her treetop invisible beyond the picture frame; she cradles the tiny Astyanax-sapling about to be torn from her branching arms.

Why a poplar? The Astanyanax scenes in this tragedy are so shocking and physical that a comic-book drawing of a human mother and infant would risk turning tragedy into melodrama. In the myth of the Heliades, the daughters of Helios were turned into poplars, transfixed as they mourned their brother Phaethon in eternity. Astyanax is addressed at one point as a ‘mushroom’, and ancient horticulturalists well knew that mushrooms flourish in poplar stumps. But a fragment of the comic poet Cratinus (not so obscure that Carson, an accomplished Greek scholar, can have avoided it) tells us that the ‘the poplar view’ proverbially denoted a seat in the theatre so high that it had no view of the stage. Andromache’s suffering is so exceptional that it escapes the boundaries of art: the frames containing her cannot accommodate her full height and topmost branches. 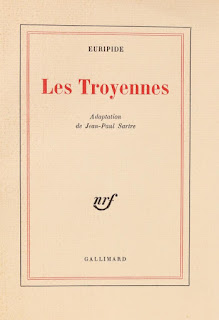 My final reservation about turning Trojan Women into a comic had been the play’s metaphysical profundity. Of all Greek tragic figures, Hekabe confronts most directly the philosophical problem of unearned suffering, in the extreme forms of genocide, separation from offspring, bereavement, enslavement, rape and annihilation of their physical homeland and social bonds. This is why Sartre adapted Trojan Women in 1965 to protest against French brutality in Algeria via Existentialism; his gods pass the death sentence alike in the opening scene, thus removing all hope, the Sartrean precondition of meaningful action or existence. It is why theatre director Tadashi Suzuki chose this tragedy in 1982 to explore the inadequacies of Shinto Buddhism in response to Hiroshima. The play juxtaposes physically manifest Olympian gods with Hekabe's explicit doubts that the gods concern themselves with humans or exist in their traditional form at all.  She appeals to the gods in an offhand articulation of 'Pascal's wager': acknowledging god may, she says, be useless, but best to do it just in case: Carson wittily renders this as ‘I do admire that old mannerism of calling out to some divinity when things go wrong’. She proposes that the supreme god is actually the physical laws that govern the material universe, or human intelligence: Carson’s Menelaus tartly responds, ‘What’s this? Some new-age spirituality?’ Finally, Hekabe repudiates  traditional religion altogether, because, in Carson’s bleak translation, ‘The gods had no interest in us/except to ruin me and despise Troy’. 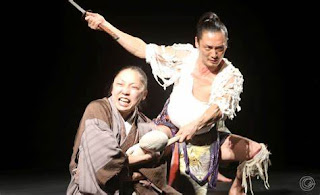 Carson and Bruno have risen to an unusual challenge. Their medium’s conventions could have flattened distinctive literary qualities, but their book instead refocuses our attention on Euripides’ styles. The format highlights this play’s outstanding quality, praised by Sidney as 'sweet violence'. This phrase  was borrowed by Terry Eagleton to entitle his own book on the tragic (2002), in which he said that tragedy can only survive as a 21st-century art-form if it is metaphysically open, aesthetically beautiful, and unflinching in its depiction of suffering. All three criteria are fulfilled by this innovative version of Trojan Women.