Why Aristotle on Friendship Matters on Mother's Day

I'm still sad after nearly six years that I have nobody to send flowers to on Mother's Day. My mother, an outstanding gardener and professional flower arranger, always snorted at the quality of the limp Interflora bouquet sent by her third-born. But she would have hated not receving one.

Aristotle was wrong about women's capacity for deliberation and participation in civic life. But he did think women could be effective moral agents. In one passage of his Eudemian Ethics 7, he implies that they are actually superior to men in the important arena of friendship.

Aristotle's discussion of friendship covers all our relationships, whether with blood kin, sexual and romantic partners or friends we have chosen. He is refreshingly clear that people related to you by blood or marriage can be very bad friends, and that non-kin can display perfect friendship. Blood may be thicker than water, but if it malfunctions it kills you.

Aristotle asks what makes the best kind of love between any two humans. Some people, he says, prefer to receive love than to give it, which makes for unequal relationships.

But even more important in analysing friendship is the question of how conscious we are of loving someone or being loved by them.

Being loved is something we have no control over; it is accidental to us. We can be loved without knowing it at all (I always think of when someone, whose identity I never confirmed, witnessed and lodged a complaint about me being sexually harassed in 1990 by a famous Professor). But we cannot love without being aware of it. 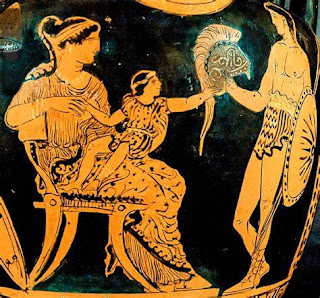 If you truly love a person, in the most perfect form of friendship, then you don’t even mind if they have no knowledge of your love or of what you would do or have done for them. You do not ask for the recognition offered to mothers on Mother’s Day. You would do anything and everything for that person, regardless of personal sacrifice, and in no expectation of recognition, thanks or gratitude.

Here Aristotle specifically cites women who under certain circumstances allow others to adopt their children. Even more specifically, he cites ‘Andromache in the tragedy of Antiphon’  (Aristotle developed his sophisticated Ethics in tandem with his love of theatre). 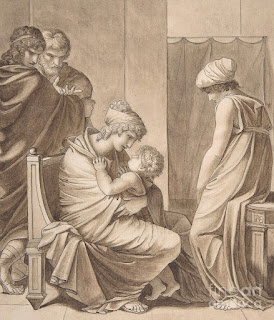 This tragedian apparently wrote a play in which Andromache sought to save her baby Astyanax’s life by sending him out of Troy to safety to be adopted and raised by other people, in the full knowledge that her son would never thank her for her altruism. 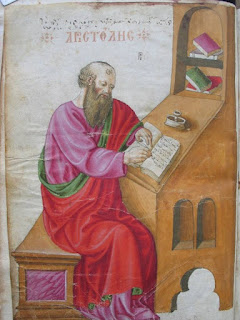 Aristotle concludes that the wish to be known as having done a friend a favour is actually selfish, for its motive is ‘a desire to receive and not to confer some benefit’, whereas the person who acts with love without requiring even recognition of their agency does it because they want to see the loved person benefit. 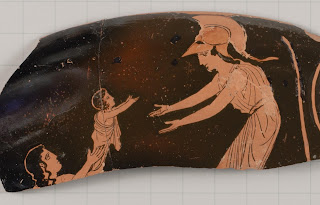 Sadly we do not know whether in Antiphon’s lost tragedy Astyanax did in fact grow up safely far away from Troy. I’ve been thinking about it as I watch children, some without any parents, cross eastern European borders from besieged cities in Ukraine. It is unlikely that Antiphon actually exempted poor Astayanax from death, but it is certainly a beautiful idea.