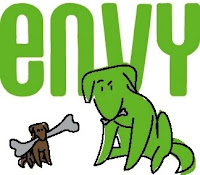 As the gap between rich and poor widens inexorably, I'm puzzled by the tolerance shown by poor humans towards the wealth possessed by the super-rich.

We need a word that means ‘rational aversion to other humans living a far more comfortable lifestyle than your own which you would like to enjoy yourself.’  Perhaps R.A.I.G. (Rational Aversion to Income Gaps). Currently our only option is the demeaning, pejorative term for a Deadly Sin, the Green-Eyed Monster, ‘Envy’.

The Stanford Encyclopedia of Philosophy (a superb open access resource which I’ve used much writing the lecture I’ve just given at Stanford Uni.) states that envy is ‘very commonly charged with being…unreasonable, irrational, imprudent, vicious, or wrong to feel’. Witness Adam Smith: ‘Envy is that passion which views with malignant dislike the superiority of those who are really entitled to all the superiority they possess’.

Even social fairness advocate John Rawls thinks envy is horrid and undermines the self-respect of the poor, thus posing a threat to societal stability. But why so? It takes self-respect and a sensitivity to human dignity to recognise the absurdity of over-payment for doing nothing useful. 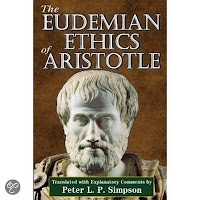 So I’m thrilled to discover that Aristotle is also puzzled. He notes the absence of a Greek word for people who fail to feel appropriate envy of the undeserving plutocrat. There wasn’t even a word in ancient Greek for that kind of incomprehension of economic reality.

In his ‘Golden Mean’ table in the Eudemian Ethics he lists twelve virtues. Each has two correlative vices caused by excess or deficiency. Courage in excess is recklessness, but in deficiency it is cowardice. Friendliness in excess becomes brown-nosing, but if deficient just means you're rude.

Aristotle says that excessive envy (phthonos) means revelling in the misery of the deservedly fortunate. The correlative virtue is Righteous Indignation (i.e. my proposed R.A.I.G.), which well-balanced people feel about the selfish rich and ill-gotten gains. But the one hole in his table of 36 terms (12 virtues and their correlative 24 vices) is the box where ‘stupid tolerance of unfairness’ should be.[*]

So both the English language and ancient Greek have a real problem with even naming the inability of people who can’t heat their own homes to resent star footballers’ salaries.

But there is some good news: ancient Greek does have a solution to my R.A.I.G problem. In Aristotle’s table, the rational and appropriate level of envy, a commendable sensitivity to inequality and desire to erase it, my cacophonous proposed virtue of R.A.I.G., is strong, holds a hint that the world can be changed, and rolls off the tongue: it is NEMESIS.


[*] I asked the Father of My Children what the English word was for 'failure to feel Rational Envy of Undeserving Super-Rich', it being missing from ancient Greek. He responded immediately 'False Consciousness'. Must have been reading Marx or somefink.

NIGHT OF THE HAIRY PROMETHEANS

I’ll be in the sky returning from lectures in California as the night of Saturday 20 February turns into morning, and memorial day for Maryland Abolitionist Frederick Douglass segues into the anniversary of the Communist Manifesto, published in East London on 21 February 1848.


Douglass and Marx had much in common. They were both born in 1818. They were both large, hirsute, and charismatic. They both wrote prose of such potency that it changed minds the world over. And both titans of the Left were inspired by a real Titan, the Prometheus of the Aeschylean tragedy Prometheus Bound. He was the rebel god whom a vicious, autocratic Zeus had chained to the Caucasian mountains for bestowing on mere mortals the gods' exclusive prerogative--fire. 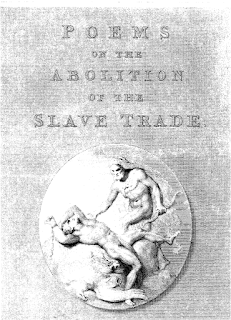 Rock-shackled Prometheus was adopted as the mythical ancestor of all slaves during the Abolition debates immediately  after the Greek tragedy was first published in English in 1773. The chains that constrained Prometheus, painted, drawn, engraved and sung by Flaxman, Blake, Fuseli, Goethe and Shelley, became instant Romantic ‘code’ for the fetters of slavery. A collection of poems published in 1807 to mark the abolition of actual trading in slaves in British territories put a picture of Hercules liberating the shackled Titan on its cover. 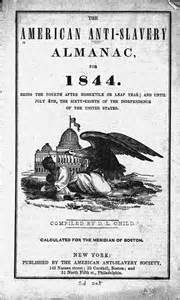 The American Anti-Slavery Almanac for 1844 offers an unmistakable allusion to the myth through the black slave mother, prone on the ground but shielding her baby from the onslaught of the aggressive eagle.  Near the patriotic symbol of the Capitol building, the stars and stripes floating overhead, the American eagle is subversively co-opted as a vicious raptor.

In 1833, Douglass was rented to the vicious slave-breaker Covey to have his rebel spirit subdued once and for all. After a spate of severe floggings, Douglass fought back for two hours and won.  Little surprise that the story of Prometheus’ defiance against Zeus was one factor which shaped Douglass’ own account of that primal showdown in his epochal My Bondage and My Freedom (1855). 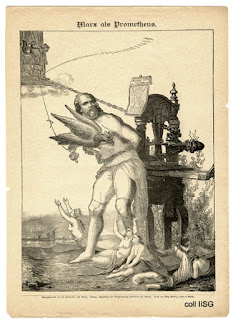 Soon Aeschylus’ Promethean fetters symbolised not just slavery but any form of oppression under capitalism. Marx represented the censorship of his newspaper Die rheinische Zeitung in 1843 as a scene from Aeschylus Bound: Marx is chained to his printing press, tortured by the eagle of Prussian censorship, and comforted by Ocean's daughters (the chorus in the tragedy) who have become fused with Rhine maidens.

Five years later, in London exile, Marx penned with Engels the rousing 23-page pamphlet destined, for better or worse, to change the world. But at least one of the manifesto's most famous sentences is a resounding allusion to that Greek tragedy: ‘The proletarians have nothing to lose but their chains. They have a world to win.’
Posted by Edith Hall at 15:57 No comments:

Cross London Bridge to the Greenwood Theatre and this week you could watch my students enact the most peculiar of ancient plays. Euripides was always avant-garde, but his Alcestis is borderline outrageous.


King Admetus gets the unusual chance of avoiding death on his allotted day if he can produce someone to die in his place. Only his wife Alcestis offers. He accepts. She dies. All involved (including their lovely children) weep. Then Admetus’ old chum Heracles turns up, gets drunk, wrestles with Death, and brings Alcestis back from the dead. Everyone (except, conspicuously, Alcestis) cheers.


The sting in the tale is that, even before the play is over, Admetus breaks the single promise he made to Alcestis—that he would never marry again and inflict a step-parent on their children. He doesn’t realise that the attractive veiled lady Heracles offers him a blind date with is, in fact, Alcestis. He takes her in as a new bedmate anyway. So the play ends with a revenant wife who has a bit of a bone to pick with her morally invertebrate husband.

My favourite adaptation is a Victorian musical-comedy burlesque (1850), performed next door to King’s College at the Strand Theatre. This Alcestis leapt at the opportunity to leave her self-important husband and bunk off with the handsome young Death to a fun new life in the Underworld. Its title was Alcestis! The Original Strong-Minded Woman!!! 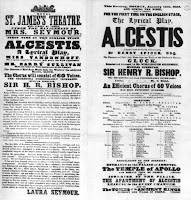 But writers with absent wives have always taken the play more seriously. Robert Browning adapted it in Balaustion’s Adventure (1871) when trying to cope with the loss of Elizabeth Barrett. T.S. Eliot adapted it in The Cocktail Party, which he wrote in 1948, the year his estranged wife died in a mental hospital. Ted Hughes, who had buried two mothers of his children, left his version when he died, with the instructions that it should be performed by Barrie Rutter’s Northern Broadsides company.

But how can a supposedly gender-equal world restage a patriarchal story in which a woman’s greatest virtue is defined as embracing the idea that her life is worth much less than a man’s? Euripides admittedly does his best, not only by that sinister ending but by portraying Admetus as a weasel-worded slimebag who can’t stick by a principle for two minutes.

My enterprising students, brilliantly organised by producer David Bullen, also did their best by rewriting the ending and with Marcus Bell’s superb choreography; Pina Bausch-style movements accompanied the exquisite ancient Greek verses recited by my esteemed mellifluous colleague Professor Michael Silk, who knows more than anyone alive about the poetic rhythms of classical Greek. But the play still bothers me and always will.  Anybody out there have any ideas about how the plot could be made truly 21st-century?

Heroes of Classics in Wonderful Worcester!

My next project up: advocating the study of the ancient Greeks and Romans, by whatever means possible, in British Secondary Education. That includes the 93% of young Britons not schooled in the private sector.

It is time for Action. Studying Mediterranean antiquity superbly equips individuals to think socio-politically and to persuade other people orally, visually and in writing. It hones transferrable skills like source criticism and culturally relativist analysis. It's a perfect A Level to do with any other subject because the Greeks invented all academic disciplines including Medicine and Material Science. It gets school-leavers and graduates great jobs and gives them nourishing and beautiful brain-food for non-working hours for life.

We really can get Classical Civilisation or Ancient History available at every state school in the land. So let’s do it. The cheapest and easiest way is to identify and support teachers of any subject, provided they have a PGCE, who want to get Classical Civilisation or Ancient History up and running in their establishments. These heroic individuals usually learn a huge amount about ancient Greece and Rome  fast because it is satisfying intellectual material and makes for  outstanding pedagogy.

Next year I’m going to start a systematic programme of visits to any school/sixth-form college that will have me in order to liaise with such enthusiasts. Please do pass the word around. I received many letters in response to an article on this topic in the Guardian last year, but not enough to keep me quiet forever.

On Wednesday I was inspired by a pilot run to the wonderful Christopher Whitehead School in Worcester (too many Ws?). There the Two Sensational Simons (Beasley and Callaghan), teachers of Drama and of German/ Business Studies respectively, have already persuaded their enlightened Head Teacher to let them get Classical Civilisation up and running. And I hope that after 30 minutes’ noisy interaction with me, another good wodge of the current year 9 (the most attentive of that age I’ve ever met) is signing up for the GCSE next year.

Worcester has classical roots. Its ancient tribe which fought the Romans were called the Cornovii. Edward Elgar, who wrote the nationalist oratorio Caractacus about Britons defying Roman invaders, was born nearby. Worcester holds some Roman objects in its museum, and boasts a very straight road to Bromsgrove. In the West Mercia Police HQ there hangs (and don’t ask me how I know this) an Italian-School oil painting of Cupid surrounded by naked boy mini-gods.

But now everyone in year 9 at the Christopher Whitehead school knows that the Roman Empire really became Christian in precisely 391 AD. They also know the difference between (and can spell) Ethics, Epistemology and Ontology (under-18s are BRILLIANT at philosophy, as Steve Neumann correctly argued in The Washington Post this week).  I foresee a whole generation of outstanding Worcester classical graduates taking over our top national positions in about 15 years. Check back in with me then. I guarantee it.