It is Jacques-Louis David’s birthday. He is all too familiar amongst classicists because his paintings ‘The Sabine Women’, ‘The Death of Socrates’, ‘Leonidas at Thermopylae’ and ‘The Oath of the Horatii’, with their pallid, depilated ancient heroes, adorn the covers of far too many books. 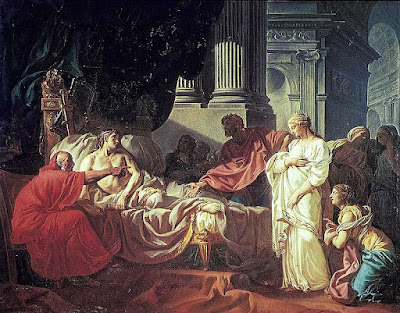 Stratonice was married off at 17 years old to Seleucus, who was 25 years her senior.  They had one child, Phlia. But then Antiochus, Seleucus’ son by a previous wife, fell gravely ill. The famous doctor Erasistratus, said to be the grandson of Aristotle, no less, was summoned.

Erasistratus was an expert in anatomy and physiology, which he had gruesomely studied by practising vivisections on criminals. He detected that Antiochus’ symptoms were heightened whenever his stepmother entered his chamber.

Fortunately for Antiochus, his father let him marry Stratonice. Their sex life was active, since they had five children. This story has everything: royalty, fabulous wealth, sex, parental self-sacrifice, a poem by Sappho, quasi-incest, a detective strand and a celebrity physician.

David was far from the only painter attracted to this story, but he outdid all others in the blinding whiteness and Aryan appearance of his ancient Macedonians and Seleucids. I am particularly fond of the version by Benjamin West, who painted the doctor Erasistratus, in lovely tan and green scrubs, looking as though he was suffering from an apoplexy himself. 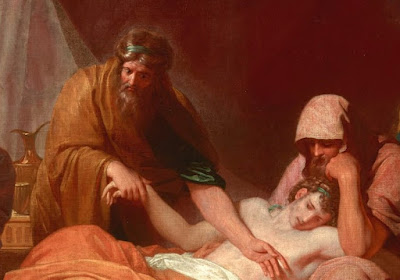 Plutarch doesn’t tell us, of course, how Stratonice felt about being passed around the family like a piece of meat, nor the psychological impact of the transfer on her first daughter, Phlia. Stratonice’s first son by Antiochus certainly grew up disaffected and was executed for rebellion. As George Eliot put it in Romola, ‘Our deeds are like children that are born to us; they live and act apart from our own will. Nay, children may be strangled, but deeds never: they have an indestructible life both in and out of our consciousness’. Bank holiday tip: don’t go falling for your parent’s spouse. 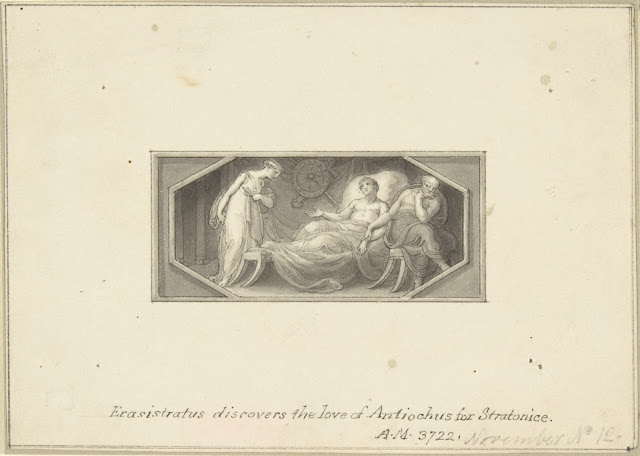