For the past week I’ve been enjoying a free summer holiday in the form of a luxury cruise.  I’ve never felt so like an ancient Wandering Sophist. I’m literally speechifying for my supper.  The cruise is a cashless reward for delivering homilies about the history of the sites we are visiting. I love emitting 50 minutes’ worth of opinions on matters which I personally find so exciting. The audience, who are not young, often seem asleep. But I refuse to be disheartened.

In TRABZON, ancient TRAPEZOS, we relived the route taken by Xenophon and his surviving Ten Thousand when they first caught sight of the waves and yelled “The sea, the sea!”  Docking in Georgia, as Jason and the Argonauts did in about 1275 BC, I was stunned by the trees and fresh breezes of Medea’s homeland; looming over the horizon is the Caucasian ridge where Prometheus was chained.

In Constanta, Romania, we admired the statue of the poet Ovid, exiled there in 8 AD for mysterious crimes including poetry glamorizing adultery; now in northern Greece, besides the super-ostentatious tombs of Macedonian aristocrats, we shall be visiting Philippi. It was on this battlefield that the Roman Republic effectively met its shambolic end in 42 BC.

The army of Mark Antony and Octavian (who pulled a cynical sickie and avoided combat) decimated Brutus’ legions. Brutus provided William Shakespeare with some of his best rhetorical opportunities in Julius Caesar, the most politically complex play in world literature. I may have to do some declaiming in the ancient theatre of Philippi. 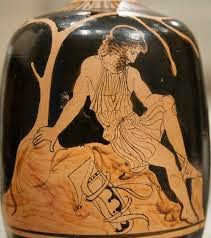 Our last port of call will be the island of Lemnos, scene of Jason’s first romantic liaison with Queen Hypsipyle, and, more grimly, a sizable slave market. But I shall be looking for the cave where the archer Philoctetes, horrifically wounded in the leg, spent most of the Trojan War in solitary agony. Sophocles’ Philoctetes is the most morally complex play in world literature. I am about to visit the place of its actual setting. This is as good as it gets.

Rediscovering Troy and the Letter "W"

I've just spent 2 surreal days in Hissarlik, north-west Turkey, generally believed to be ancient Troy. I was telling a great cameraman where the Wooden Horse, IF historical, MIGHT CONCEIVABLY have been dragged inside, in ABOUT the 13th century BCE.

Everything in Trojan War Studies depends on the sound represented in our alphabet by the letter "w". Bronze Age Ilium/Ilion is better called Wilion. (W)ilion/Troy was known to its eastern neighbours, the Hittites, as WILUSA. But between 1300 and Homer the Greeks forgot the sound "w". The lost sound is known as digamma and represented by the symbol ϝ.

When "w" went missing, the word for wine, woinos, started to be pronouned oinos. The word for king, wanax, started to be pronounced anax instead. Etc. We must assume the existence of this sound to make sense of the metre of Homer's epic Iliad (or Wiliad). This means that the poem must include verses composed much earlier than Homer (operating in the 8th century BCE) and possibly composed as early as the 13th century BCE. On this rests almost the entire the argument that the Iliad, or parts of it, put us in direct contact with the reality of Bronze Age Troy.

But my great discovery this week is that the sound "w" has resurfaced in western Turkey after three millennia! The Prime Minister (and aspiring President) Recep Tayyip Erdoğan has his name pronounced ErdoWAN. He has another strong connection with the Bronze Age,and that is in his attitudes to women. He has recently said that all Turkish women should be producing three children, and that a woman without a headscarf is equivalent to "a house without curtains"

Controlling my desire to imagine ErdoWAN with Venetian blinds crashing shut across his face, and squashing his nostrils, I took to adding "w" onto the beginning of all place-names in Turkey. Wistanbul etc. ErdoWAN lives in--ahem--Ankara.
Posted by Edith Hall at 06:21 No comments:


In an unusual ancient Greek poem, a peasant farmer called Lysixenos honours ‘Wheat-Crowned Demeter’, goddess of all things arable, by dedicating in her temple the tools of his trade: his sickle, his plough-share, which 'loves the Earth', and his ‘three-pronged wooden pitchforks’ (Greek Anthology 6.104). Lysixenos has become disabled through a life of hard labour, and yet remains grateful to the goddess. But at some point in the 16th century, the pitchfork began to symbolise something less humble: the wrath of the revolutionary peasant.

Seattle Venture Capitalist Nick Hanauer, who claims prophetic status in the form of an unusual ‘intuition about what will happen in the future’ has just announced, ‘I SEE PITCHFORKS’. Not merely pitchforks, but ‘revolutionaries and crazies, the ones with the pitchforks’, who will endanger the fortunes and the very lives of the American super-rich.

The ‘pitchfork’ admonition comes in an article (in Politico magazine) addressed to ‘My Fellow Zillionaires’. Not being sure what a zillionaire is, I read on.  A zillionaire is a ‘.01%er’, anyone like Hanauer ‘with a life that the other 99.99 percent of Americans can’t even imagine. Multiple homes, my own plane, etc., etc.’

Primed to loathe Hanauer, I found myself intrigued.  Maybe he is so clear-sighted because he is a Philosophy graduate (from Washington University, Seattle--critics of the economic utility of Humanities please take note). I have not yet discovered whether Hanauer studied much Plato and Aristotle, whose works on political science would certainly have warned him about the dangers of extreme inequality.

His article is a non-apologetic capitalist plutocrat’s plea for his class to do something quickly about the rich/poor divide: ‘inequality is at historically high levels and getting worse every day… Unless our policies change dramatically..we will be back to late 18th-century France. Before the revolution. And so I have a message for my fellow filthy rich, for all of us who live in our gated bubble worlds: Wake up, people. It won’t last.’

I am not convinced Hanauer is correct. People can be downtrodden for centuries before they realise there is any alternative, as the pious but disabled Lysixenos proves. It can take more centuries before they do anything about it. Cynically, I also wonder whether Hanauer’s political gestures are not just more shrewd money-making ventures: as if all his investments in Amazon etc. were not lucrative enough, his 2007 The True Patriot, co-authored with Eric Liu, is a bestseller.

But my real problem is with his anachronistic ‘pitchfork’ image. If and when the poor of the USA do decide that Enough is Enough, they will struggle to find any pitchforks, which have long been rendered obsolete by mechanical harvesting and baling machines. The US poor now work in service industries rather than in producing anything useful like cereal products. Firearms, makeshift gasoline bombs and boiling oil, from deep-fat fryers in fast-food outlets, seem much more likely to me.