Ideas of SUCCESS ancient and modern


I find myself stumped as to what to say about ‘ideas of  success in antiquity’ on live radio next Wednesday night at 2200 pm. I've been invited to help mark the 50th anniversary of a famous BBC radio broadcast when ‘the nature of success in contemporary society’ was discussed by an (of course all white male) team:  one hero of mine—the Marxist intellectual & art historian John Berger—the self-appointed pontificator Malcolm Muggeridge, and actor Michael Redgrave. I dread to think which one I am supposed to be the substitute for.

While I can happily explain to the BBC listenership the rather bland Latin root verb succedo, which can mean all kinds of different movement through space, time, systems and procedures, my problem is that there was no ancient Greek  word for ‘success’. There are words for material prosperity, excellence, military or athletic victory, glory won on the battlefield, immortal fame, good luck and for happiness. Aristotle spend his life trying to work out what defined the ‘Good Life’ and how to achieve it permanently. But there was no simple way of translating ‘success’ in sentences like ‘Alan Sugar is a success’ or 'Alan Sugar has enjoyed success.'

I wonder whether my planned interlocutors, academic Peter Francopan and theatre director Kwame Kwei-Armah, will agree with me that success is intimately related to capitalism, entrepreneurship and accumulation of material goods. Having only recently paid off a longstanding mortgage, and feeling ecstatic freedom from pressure to work-for-money if I don’t want to that I have not felt for quarter of a century, my own sympathies lie with Bob Dylan. Neither fame nor fortune has made him happy, and he says, ‘A man is a success if he gets up in the morning and gets to bed at night, and in between he does what he wants to do.’ Success is freedom. It is not having to be at someone else’s beck and call in order to survive. On this definition,  a universal basic income would make successes of us all. 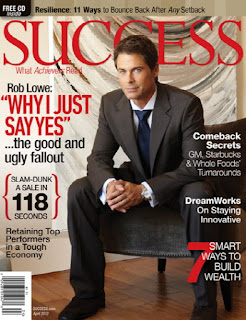 But that is not how the word is generally used. A man (and this is gendered) is a ‘success’ if he has wads of cash, a luxury home, a prestige-brand car and can buy/marry high-value sexual partners. In ancient Greek thought, people who accumulated money and the concomitant access to unlimited physical pleasures were often very far from ‘successes’ if their lives were taken in the round: Midas’ obsession with gold resulted in death from starvation; the fabulously wealthy Croesus of Lydia, far from being the happiest man in the world, as he believed, lost his son, his wife and his kingdom.

Alexander the Great was a successful imperialist, but dying of drink in his thirties surely disqualifies him. Medea was a successful pharmacist, but led rather an unstable life. Pericles begins to get there for me, having made a good speech, planned some nice buildings and enjoyed a rich personal life. But must have died, probably in agony from the plague, knowing that he was leaving the Athenian democracy in trouble.

So please help! Is there anyone out there who can help me with a ‘faithful’ translation of SUCCESS into an ancient Greek concept, or think of a classical myth, hero, text, historical figure who could illuminate the idea of SUCCESS for a 21st-century audience? I will be eternally grateful!

It’s ‘International Day of Democracy’ (15 September). So I have just written my forthcoming review for History Today of Paul Cartledge’s outstanding new Democracy: A Life. A major argument underpinning his superb volume is that we don’t pay enough attention to the meaning of  the –cracy part of the word.

The ancient Athenian citizens, free men rich and poor—the demos—held the sovereign executive power—kratos. They wielded it directly. Their will was not distorted by power-hungry career politicians consistently failing to represent them conscientiously.

That is one reason why the Athenian democracy did not deteriorate into an oligarchy but functioned effectively for close on two hundred years. The understandable frustration with inadequate representation lies beneath the loyalty of grass-roots UK Labour Party members towards Jeremy Corbyn (whatever you think of his un-coruscating performance as leader).

The Athenian democrats got annoyed when elitists tried to subvert their power: a memorable image (above) of a personified Demokratia crowning the Demos was created at one such time. I also like this elegantly coiffed Damokratia (in the local dialect) on a coin of the ancient Greek city of Metapontum in south Italy.

But most personifications in history have been hideous harridans conceived by opponents of democratisation, as in post-French-revolution British cartoons. Other visualisations are just ludicrous; witness the colossal ‘Democracy Monument’ in Bangkok, Thailand, which is ruled by a military junta.

Come to think of it, the ‘International Day of Democracy’ was invented in 2007 by a United Nations committee chaired by—wait for it—Qatar, which not only uses forced labour but is to all intents and purposes an absolute hereditary monarchy (not to mention the floggings, outlawing of atheism, trade unions, homosexuality etc.). This is despite a cosmetically enhanced consultative council and assembly.

Like Paul Cartledge, I am both convinced that ''real' democracy--government of the people, by the people, for the people--is the way forward for human civilisation and that the word and ideal are all too frequently traduced. I don’t think we should take today's celebrations too seriously.

Gods Behaving Badly; or Revenge of the ParOlympian

My jaw hit the ground watching local Cambridgeshire hero Jonnie Peacock yesterday win gold in Rio by running 100 metres in 10.9 seconds. I could not run it in 50 seconds and I have my original two legs.  His victory came as I prepare a paper for a conference in Patras on the only Greek god who was disabled (and the only one in full-time employment). But he had the last laugh on Olympus.

Hephaestus was born clubfooted and his callous mother Hera (the Queen of Heaven to whom peacocks happen to be sacred) threw him away. He was brought up by sympathetic nymphs in Lemnos and trained in metalwork


But he got his revenge on his mother by sending her a golden throne with a secret mechanism which entrapped her.  She was the one being mocked now. Only he had the know-how to release her.

The war-god Ares failed to get Hephaestus back to Olympus by force. Dionysus, who had also been snubbed by other gods, had more success by plying him with wine. Hephaestus, sometimes on a donkey, along with Dionysus and a retinue of revelling satyrs and bacchants, was at last welcomed on Olympus, club feet and all.

On another occasion Hephaestus was mocked because his recent bride Aphrodite had an affair with Ares. Hephaestus devised a trap which caught them in flagrante in a net. Inextinguishable laughter arose amongst the gods. He got his status and pride back, plus an instant divorce with full financial compensation.


The Return of Hephaestus, a.k.a. ‘Gods Behaving Badly’, was a popular scene on Athenian wine jugs. It was reenacted by citizen pals every year on the booziest day of the religious calendar, the feast of the wine-jugs at the Anthesteria festival. I want to be there.

The vase-paintings fascinate me for the variety of joyous things Hephaestus’ gang could do with wine jugs, as well as the phalluses and tails of satyrs and donkeys. Revenge of the ParOlympian indeed. 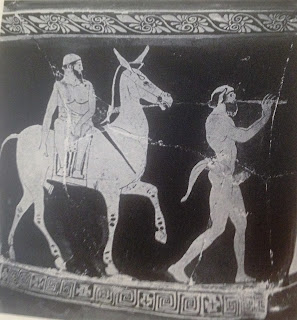 A Neglected Source for 'Tis Pity She's a Whore

You can still get a ticket for Lazarus’ Theatre’s flamboyant production of John Ford’s ’Tis Pity she’s a Whore, as adapted and directed by the inventive Ricky Dukes, at the central London Tristan Bates theatre. This play notoriously features brother-sister incest before its gory denouement. 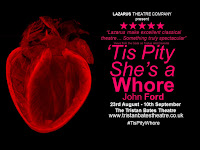 On Wednesday I was on a panel at the theatre discussing plays that break taboos. I had to remind everyone that ancient Greeks dramatists were braver than any subsequently.  Euripides’ Aeolus was the most shocking tragedy in world history, beating every Jacobean gorefest. It makes ‘daring’ modern authors like Edward Bond and Sarah Kane feel like Alan Ayckbourn in comparison.

In Ford’s play, Giovanni may get his sister Annabella pregnant. But she does not live to give birth. In Euripides’ Aeolus, the incestuous sister gave birth in the middle of the play, her screams shocking the Athenian audience.

Aeolus, god of the winds, had several sons and daughters by the same mother. In the tragedy, one son, Macareus, had got his sister Canace pregnant. He gave a famous speech in which he defended the principle of moral relativism: there is no absolute right and wrong, he claimed. It is only human thought that determines what is right or wrong. Socrates stood up in the audience and exploded with moral outrage.

Aeolus then ran a lottery deciding who his children would marry. Macareus did not get allotted Canace. She went into labour. Canace killed herself with a sword sent by her father;  her brother probably followed suit on discovering her corpse.

One of my favourite Greek vase-paintings gives pride of place to Canace, lying on a couch, holding the suicide weapon, her hair and clothing loosened (often a sign of recent labour), dishevelled and drooping in death. There is no sign of the baby, who may have been discovered by her father and exposed by the time of Canace’s death. Aeolus stands behind Canace, hurling insults across her limp body at Macareus; also present is Canace’s nurse, who had helped her; her grey head is covered and she has been arrested. 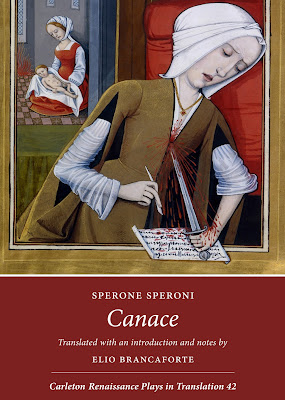 Euripides’ Aeolus did not survive to be read except in fragments today. But it was well known to Roman authors and inspired some including Ovid in his Heroines’ Letters no 11 to retell the story. The theatre-mad emperor Nero liked acting the leading role in Canace Parturiens (Canace in Labour). Ovid inspired Renaissance Italian playwright Speroni to write an influential tragedy Canace; it is a major source of Ford’s tragedy, although he gave the characters modern Italian names.

I am not remotely defending sibling incest. But when we discuss Giovanni’s taboo-breaking speech defending his right to enjoy love with his sister, let us remember who got there first. I am not sure a sister would be allowed to give birth to her brother’s child even today in a TV drama, although please correct me if I’m wrong.
Posted by Edith Hall at 16:41 2 comments: