A Short History of Class Divisiveness in British Classics

2018 has seen the irruption into the public sphere of longstanding disagreements within the British Classics education world about the content and purpose of our courses. If you’re confused, here’s a potted history.

c. 1700     The terms ‘Classics’ and ‘Class’ both acquired the meanings in English they now bear, ‘study of ancient Greece & Rome’ and ‘position in socio-economic hierarchy’.

by 1730      Latin and Greek, which are time-consuming and therefore easy to withhold from working and working-class youngsters, become adopted by all elite male educational institutions as the preferred curriculum. The use of Classics in social exclusion and divisive rhetoric is inaugurated.

1944         Butler Education Act brings secondary and indirectly tertiary education even in Classics to a small proportion of working-class and lower middle-class students via grammar schools.

by 1955    Courses in Classical Civilisation begin to be rolled out enthusiastically in non-grammar-non-private-secondary sector by enlightened educationalists, only to be sneered at by self-styled ‘proper’ Classicists.

2010         The Charity Classics for All, at that time no supporter of Classical Civilisation courses, founded at instigation of Telegraph / Spectator journalist and former university lecturer Peter Jones.

2017      Advocating Classics Education project is launched to support teachers of Classical Civilisation and Ancient History as well as those of classical languages, and works officially and amiably with Classics for All.

2018      Divisions harden COMPLETELY UNNECESSARILY in response to things commissioned by Peter Jones for the Classics for All website.

14th May    It posts an inflammatory review by Oxonian Richard Jenkyns (a well-known defender of elite classical values), commissioned by Peter Jones, of Exeter Uni Professor Neville Morley’s brilliant and progressive Classics: Why it Matters. Jenkyns writes that the book is ‘an attack on Classics’.

25th May     Morley’s calmly inclusive response to Jenkyns’ review is published by Classics for All: ‘it’s not that I wish to destroy his language-focused approach to Classics, but I do see it as just one element of a much broader, inclusive and multi-disciplinary approach’.

5th August         One patron of Classics for All, Boris Johnson, writes in a derogatory way about a small and vulnerable group of Britons in the Telegraph. Two other patrons, Charlotte Higgins and Natalie Haynes, write to Classics for All to say they will resign as patrons if Boris Johnson doesn’t. They are also both committed patrons of ACE and often speak in public about how important Classical Civilisation courses are.

9th October       Classics for All Trustees will meet to discuss What To Do About Boris. Given the line-up of Trustees and their self-descriptions, it is going to be a bumpy ride.

Summation:
The meeting could decide our subject’s future. Will British Classics entrench itself  deeper into the class war after 320 years, or form a united public front? Unity would mean no more disrespecting of either Classical Civilisation courses or any British citizens. This matters. Six nerve-wracking weeks to go.

A Short History of the Term Demagogue

With loudmouthed ‘populist’ leaders everywhere in the news, we often hear the pejorative word demagogue. But the earliest instance of the compounded stems dēm- and agōg- in surviving literature occurs in Aristophanes’ Knights of 424 BCE (line 191) WITH NO ADVERSE NUANCE. The men who want to make a Sausage-Seller leader of Athens, instead of the (allegedly) uncouth Cleon now exerting power, say that ‘leading the people (demagogia) is no longer a job for the educated or well-mannered man’.

In English texts until the Civil War, the term dispassionately describes leaders of popular factions within ancient republics.  It was the beheading of Charles I in January 1649 that irrevocably affected the meaning. In Charles’ purported spiritual autobiography, the Eikon Basilike published ten days after his execution, he says everyone knows who aroused the people against him: ‘Who were the chief Demagogues and Patrones of Tumults’ who had tried ‘to flatter and embolden them, to direct and tune their clamorous importunities?’

But Milton saw what this Royalist propaganda had done to the term demagogue. His response, Eikonoklastes¸ remarked on ‘the affrightment of this Goblin word’ and said that these Demagogues were actually ‘good Patriots’, ‘Men of some repute for parts and pietie’ for whom there was ‘urgent cause’.

Despite Milton’s protest, the word, with sneering associations, became standard currency in English thenceforward. This in turn affected the way historians read ancient Greek. So through a toxic, uncritical dialogue with Thucydides and Aristophanes, Cleon became not the archetypal leader of the people, but the archetypal ‘patron of tumult’, or as Don Marquis perceptively put it, any ‘person with whom we disagree as to which gang should mismanage the country’.   Men who have been accused of being ‘demagogues’ occur on all points of the political spectrum: Charles James Fox and Tom Paine, Robespierre and Boulanger, Gerry Adams and Ian Paisley, Adolf Hitler and Arthur Scargill. 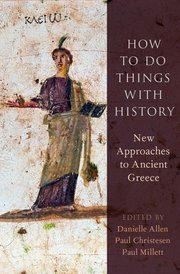 A new book How to Do Things with History has just been published in honour of my friend of thirty years, Professor Paul Cartledge.* My own essay (of which I’m happy to send a pdf to anyone emailing me at my two names separated by a dot @kcl.ac.uk) argues that we have let our prejudiced sources on the Ur-demagogue Cleon, a resolute supporter of the poorest category of Athenian citizens (thetes), taint our picture of everyone who stands up for the rights of the under-classes ever since. Aristophanes and Thucydides do a hatchet job on him, but both had personal reasons to dislike him and his loyal following immensely.**

By uncritically adopting their assessment, we forget (a) that Cleon’s supporters thought that ‘leader of the demos’ was an  honourable title and (b) that if any of their working-class views had survived they would have told another story. A proportion of them may have been newly emancipated slaves as well as those born into the thete class: Aristotle tells us that freedmen, if asked to whom they would choose to entrust their affairs, would automatically answer ‘Cleon’.***

There is also one precious source which shows that a much more positive picture of Cleon circulated even in mainstream, non-thetic citizen circles (Demosthenes 40.25).  Plato probably didn’t follow Aristophanes and Thucydides in attacking Cleon because Socrates respected Cleon and was loyal to his memory, having fought on Cleon’s successful campaign to retrieve Athens’ imperial territories in the north.  Socrates stood in the battle lines at Amphipolis, as he says in the Apology (28e).

Antony & Cleopatra in London and Aristotle in Oxford

As the heatwave grinds on, I found myself talking this week about two titans of the classical world, Mark Antony and Aristotle.


In the week that marks the anniversary of the final defeat of Antony and Cleopatra by Octavian at the Battle of Alexandria on July 31, 30 BCE, I was asked to the rehearsal room to guide the cast of the National Theatre’s upcoming production of Shakespeare’s Antony and Cleopatra (directed by Simon Godwin) through the complexities of Mediterranean history during the preceding decade. 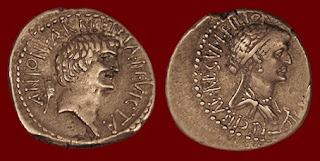 The whole cast was impressed by how closely Shakespeare had followed the language and imagery in Plutarch's exquisite prose biography of Antony. The loudest ‘ooh’ greeted a coin found by the Sea of Galilee which shows how seriously Antony and Cleopatra had taken their plan for joint rule at least of the eastern part of the Roman Empire. But shock was expressed at the horrible propaganda images of Cleopatra as a strumpet churned out by Roman imperial publicity machines subsequently.

Ralph Fiennes (Antony) wanted to know how torn Antony really was over parting ways with his former Triumvirs (unanswerable question!); and whether he was serious about marrying Octavian’s sister while carrying on a long-term affair with the Queen of Egypt (also unanswerable, although he had children that decade with both).

Sophie Okenedo (Cleopatra) was fascinated by the artefacts that show the cultural hybridity of Cleopatra’s Egypt and wanted to know how much being a woman had proved an obstacle to a proud Ptolemy determined to retain independence for her ancestral realm.

Tim McMullan (Enobarbus, who gets the best poetry) seemed struck by the tragedy of Gnaius Domitius' Ahenobarbus’ career—he changed sides twice and died a lonely death, says Shakespeare's source Plutarch, out of shame at his own disloyalty.

Then to Oxford on Saturday, where Nigel Warburton, by miles the leading proponent of public philosophy in Britain, interviewed me on my book Aristotle’s Way for his Philosophy in the Bookshop series in Blackwell’s store on Broad Street.  Despite the searing heat, a wonderfully engaged audience of all ages gathered to ask penetrating questions about Aristotle’s relevance for the ethical and political issues we face today.

With audiences like this, despite all the reasons for gloom about the future, and the antics of our leaders on both domestic and world stages, I feel convinced that there are reasons for optimism. People want to make sense of our past, present and future, and I don't think that time is up for homo sapiens just yet.