Five Ancient Greek Rings for the 5th Day of Christmas 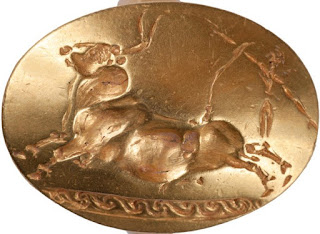 The Five Gold Rings of the Fifth Day of Christmas were originally Jesuit ‘code’ for the Pentateuch, the first five Old Testament books. But snow has confined me to an AIRBNB flat in Leith, so I've here assembled Five Pagan Rings.

1] A rich Mycenaean’s grave, recently excavated near Pylos in the Peloponnese, contained gems engraved with astounding intricacy and this fine gold ring. Our Mycenaean may have raided it from Crete, because its bull-jumping scene, with its mysterious links to the Minotaur legend, is typical of Minoan art.

2] It was when sailing to Crete to kill the Minotaur that Theseus became star of my favourite ring-myth, told by an undervalued poet called Bacchylides. The sexual harasser King Minos tried to terminate Theseus. He threw his golden ring into the sea and ordered Theseus to retrieve it. This was silly, since Theseus was a champion underwater swimmer and the son of Poseidon. Assisted by friendly dolphins, he surfaced with the ring and a new outfit his stepmum Amphitrite gave him in her sea-floor palace. 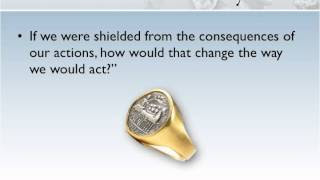 3] Why do engagement and wedding rings symbolise fidelity? They often signified treachery and falsehood in antiquity. The most famous ancient ring belonged to Gyges. Plato tells the story while asking whether we would all misbehave if we could do so with impunity.

Gyges was a shepherd who came across a ring of invisibility which enabled him to have sex with the queen, kill the king, and take over the throne.  It can be a good party game to get people to confess how they would use a ring of invisibility: I would reserve it for forcibly redistributing wealth and Bad Hair Days.

4] In Lucian’s dialogue Lover of Lies, a pathological liar called Eucrates describes how an iron ring, given him by a mysterious Arabian, allowed him to visit Hades. He inspected the River of Fire, the Acheron and Cerberus. He recognised his own dad because ‘he was still wearing the same clothes in which we buried him’.

5] The Fifth Ring belongs to Charicleia, the heroine of the novel An Ethiopian Story. Its gem is an Ethiopian amethyst, ‘more beautiful than those of Spain or Britain’.  The intricacy of the scene engraved on it is literally incredible. A shepherd boy supervising several pastures plays his pipe to his flocks. Lambs jump, climb rocks and dance in a circle round the shepherd. The youngest lambs try to escape but are prevented by a golden band representing a wall.

The dancing sheep are explicitly described as creating ‘a bucolic theatre’. This has excited historians of the ancient theatre who have used it as evidence for a genre of ancient pastoral drama. This is, sadly, to miss the point: the scene on the ring represents fiction’s power to write things into existence that are impossible in reality. 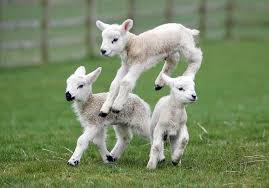 But there are times when I want to go with the more literal-minded amongst my academic colleagues. Having been appalled by the expensive mediocrity of Shrek: the Musical on Boxing Day, and since our TV aerial became detached in shock at the appearance of the new Dr Who, I would much enjoy a pastoral show with dancing sheep right now.
Posted by Edith Hall at 12:28 1 comment: 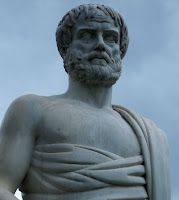 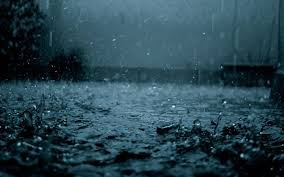 The problem lies not in democracy as such, but in the ultimate failure of post-war democracy to stop large sections of the population being frozen out of basic necessities of life and a decent education.  Aristotle, who believed everything in nature had an objective, never answered to his own satisfaction exactly what purpose was served by rain and snow in winter. I feel I understand his bewilderment, at least on a metaphorical level.
Posted by Edith Hall at 11:14 2 comments: