Greek Wizardry on the Londinium Underground 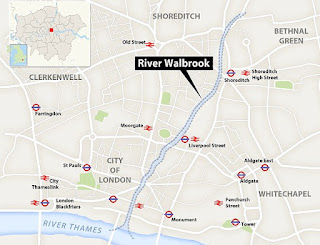 Yesterday the Museum of London opened WRITTEN IN BONE, exhibiting results of DNA and isotope research on remains of residents of Roman London. One blue-eyed teenaged girl, excavated in Southwark, had been born in Africa, but her mother’s ancestors came from southern-eastern Europe and west Eurasia.

South-eastern Europe may mean Greece. Regular readers know that I collect evidence for Greeks and Greek culture in ‘Roman’ Britain. In a week when winter viruses felled me and my students, I rediscovered my favourite exhibit in the Museum. It is a pewter amulet with a magic spell designed to ward off plague, inscribed in ancient Greek by a man called Demetrios. He will have worn it suspended from his neck. It was found on the precise opposite side of the Thames from Southwark Girl, at the point where the ancient underground river Walbrook disgorged at Cannon Street station.[i]

Cacophonous..carried by the air, slashing from afar, man-slaying, agony-intruding, depressing, flesh-eating, liquefying, deep in the veins. He invokes four deities: three mysterious figures who often appear in ancient spells and whose names ultimately derive from Hebrew—Iao, Sabaoth and Abrasax—and the Greek doctor god, ‘Phoebus [Apollo] of the unshorn hair, archer’. Apollo is prayed to about plagues everywhere in ancient Greek literature including the Iliad and Sophocles’ Oedipus.

Demetrios was probably trying to protect himself from the ‘Antonine’ smallpox-like plague. It began in 165 AD during the reign of Marcus Aurelius and devastated Roman legions across the empire. The forms of Demetrios' letters and some spellings suggest either that he was bilingual in Greek and Latin, or even that Latin was his first language and he was writing in exotic-sounding Greek because he believed it possessed magical powers.

In two final transnational twists, the hexameter verse line invoking Apollo is a variant of an anti-plague spell also recorded in an ancient Greek text by the Syrian Lucian. Lucian says the spell was actually manufactured at the time of the Antonine plague by a Black Sea charlatan called Alexander. He had invented a fraudulent new avatar, in snake form, of Apollo’s doctor son Asclepius. He named his new oracular serpent Glykon and attributed weird prophetic statements to him.

Back in Londinium, we sadly do not know whether Demetrios’ internationally known spell—fraudulent or not—proved effective. I personally survived last week on a diet of Lemsip and single malt whisky, but admit that when people sneezed in my face on the Bakerloo Line I found myself reciting those bizarre ancient words, just in case:  ABRAI BARBASO BARBASOCH BARBASOTH EULIOR ATHEMORPHI!

[i] I owe much of the information here to this excellent article by R.S.O. Tomlin.

My Bid to become Mayor of London 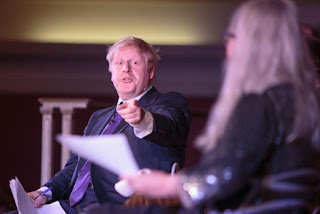 Yesterday the British press was full of Mary Beard’s victory, with the Romans, over Boris Johnson’s advocacy of the Greeks in a debate at Central Hall Westminster, also screened on Curzon TV.

Since I beat the admirable Professor Beard hands down in a similar debate at the Cheltenham Festival eight years ago, I can only infer two things from this dismal showing on BoJo’s part: 1) I should be made Mayor of London immediately, and 2) Beard clearly learned how to win this kind of debate (i.e. by NOT using notes and by making people laugh) from me. I am also outraged that the Greeks have been left so poorly defended.

The audio of the Beard/Hall debate has disappeared mysteriously from the internet, where it was until recently freely available. If anyone knows where I can access a copy to link to from my website I would be grateful. Meanwhile, since I am stricken with flu and feel too ill to think, my blog this week reproduces that written in October 2007 by our chairman at Cheltenham, Peter Stothard, editor of the Times Literary Supplement, who gave as far as I can recall a fair and accurate account of proceedings. And as for you, Comrade Johnson—next time, give me a ring and I’ll tell you why the Greeks REALLY matter.

Greeks vs Romans: the result

In the end the chairman called yesterday's close-fought TLS debate for the Greeks. Listen here if you want to hear it.
At the start of the event a show of hands from the 400 in the Everyman Theatre revealed a small and unexpected Roman majority.
The Romans, it seemed, had done more for us - or at least for Cheltenham - than the Greeks had.
But at the end of a high-impact hour of gladiatorial argument, our Hellenist champion, Edith Hall, had turned round enough men and women voters to scrape home.
Mary Beard fought as hard as any legionary, defending the beer-drinking soldiers of Hadrian's Wall against a high-minded Hall assault on their poor spelling and restricted vocabulary.
But Beard's countering of pure Greek science with applied Roman skills,Greek logical philosophy with Roman running water, did not play as strongly with the audience as one might have expected.
Too complacent about their comfort perhaps in this Gloucestershire spa town.
The bloody bouts of the arena - raised by an early questioner - also played against the Roman case.
The Beard strategy was to claim that both Roman and Greek societies operated equal-opportunities-for-cruelty.
This worked with the slavery argument. Both were accepted as bad on that score.
But the idea of Greek gladiators and beast-fights never caught on. Not enough movie exposure, I guess.
The Beard case that much less Roman Colosseum activity took place than we think (just too expensive) was also not quite believed.
Does nothing fail to happen in Cheltenham just because it's too expensive?
The pace of argument was furious - with one lady audience-member asking for a little less adrenalin ten minutes into the first half.
The Roman side did well on war and terrorism-control, on the secret ballot and the multiculturalist skills of running big cities and empires.
But again the gentle town of Cheltenham was perhaps not quite right for that. War was bad anyway. Science and philosophy were good. The purer the better.
Professor Beard accused Professor Hall of using Greek sophistry - of choosing different bits of the Greek world to support different arguments.
Professor Hall smiled and continued. Protagoras and his sophist friends would have been proud.
The TLS chairman was proud of them both - and of everyone else who turned out at 10 am on a Saturday morning for such an educative scrap.
Posted by Edith Hall at 08:40 1 comment: 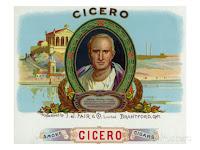 With two reviews of books written by lively British authors fixated on Cicero published in the last ten days, I here offer a link to one of Robert Harris's political thriller DICTATOR which appeared in last week's GUARDIAN and a pre-print of Mary Beard's eagerly anticipated SPQR, the paywalled version of which appears in the current Prospect Magazine.

A Strange Script & A Self-made Scholar

Three lectures in 36 hours in Nicosia still left time to visit the archaeological museum with my PhD student, theatre director Magdalena Zira. One stunning inscription from the 6th century BCE, in the mysterious syllabic script of early Cyprus, led me to the working-class intellectual titan who made the first crucial steps in deciphering it, George Smith of Chelsea(1840-1876).

Brought up in a slum tenement, after minimal schooling in which he learned little except the Old Testament, Smith was apprenticed to an engraving company off Fleet Street at the age of 14. He spent every leisure minute in the British Museum poring over the recent finds from Nineveh and Babylon. He taught himself cuneiform, and got a low-paid post as a ‘repairer’, piecing together inscribed fragments. He became rather too indispensable to the great star of cuneiform studies,  Major-General Sir Henry Creswicke Rawlinson.

Almost all of the 3rd and 4th volume of Rawlinson's Cuneiform Inscriptions was actually contributed by Smith, whose own works then changed the face of Assyrian Studies. Besides an avalanche of game-changing volumes including the enormous Annals of Assurbanipal,  he brought the world the Babylonian creation poem Enuma Elish. But his most famous feat was the sensational public reading in 1872 of his translation of the  account of the deluge from the Epic of Gilgamesh. This made it difficult to read the flood in the Old Testament as anything other than myth rather than history.

Smith miraculously deciphered Gilgamesh from the clay tablets discovered by the Assyrian Hormuzd Rassam. The translations Smith gave to the world between 1873 and 1876 changed our understanding of the history of literature for ever. His ‘cracking’ of the syllabary of Cyprus in 1871 was a mere bagatelle in comparison: scholars as effortlessly brilliant as Smith can make the rest of us despair.

Having rewritten biblical studies and invented Babylonian literature, as well as fathering six children, Smith died of dysentery at the age of 36 in Aleppo and was buried in the Protestant cemetery belonging to the Levant Company. I do not know whether his grave has survived the last few years.

Here is what the Nicosia Museum inscription actually says (it is also a funeral monument, perhaps for someone else who died before her time): [THIS GRAVESTONE BELONGS TO] TIMOKYPRA, DAUGHTER OF ONASIKYPROS. This sort of voice from the longlost past makes my hair stand on end.
Posted by Edith Hall at 10:28 2 comments: