An Epic Week, in Several Senses 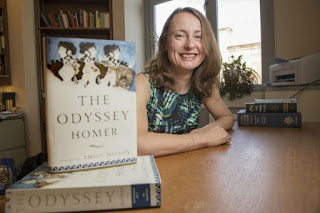 An epic week. Robert Mugabe’s 37-year rule in Zimbabwe ended, an event headlined in NewsDay Zimbabwe as ‘Epic Fall of a Dictator’. Less epically, I helped host Professor Emily Wilson when she came to my university to talk about her superb new translation of the Odyssey.

It's a literary landmark and an epic achievement which I predict will rival previous stellar Odysseys by Alexander Pope and E.V. Rieu. Rieu’s was only knocked off the top of the list for bestselling paperback in the UK by Lady Chatterley’s Lover. I discuss Wilson’s version in a Telegraph review which I was told would come out this weekend, but haven’t yet seen as it is, er, not my regular newspaper. I will provide a link here soon.

On Thursday I felt like the academic equivalent of an epic warrior since it was the most strenuous day of my entire working life. In Our Time with Melvyn Bragg and my mates Paul Cartledge and Sam Gartland was about Thebes, believed by the ancients to be the oldest Greek city of all. Epic poems about its serial sieges and ‘epic fail’ royals were composed from the Bronze Age to Statius’ Thebaid and beyond.

From Broadcasting House I dashed to Gresham College in Chancery Lane, where at 1300 I gave my inaugural lecture as Visiting Professor. It was on the epic movie Troy, the epic poem the Iliad, and the Mycenaeans they both portray. It can be watched here.

The best thing about the movie is the casting. Brian Cox’s Agamemnon is always in my head when I teach the Iliad: this Mycenaean monarch combines the raucousness of Cox’s working-class Dundee childhood with the nastiness of President Snow in The Hunger Games. Even our pets look terrified when he raises the war-cry on our TV (the epithet 'good at the war-cry' is not actually used of him in the Iliad, rather of Menelaus and Diomedes, but Cox is so good at it that I'll tolerate the inaccuracy).


Thence quickly to Nottingham, where at 1800 I lectured to the local Classical Association on Virgil’s Aeneid and possible Carthaginian sources—even epic poems?—lost when the Romans ‘deleted’ the library of Carthage along with the rest of the city in 146 BCE. The venue happened to be Nottingham Girls’ High School, which I attended in the 1970s. This brought back memories of reading Virgil there myself, and already preferring Homer.

But the week ended with Mother Courage at the Southwark Theatre, directed by Hannah Chissick. It is the best production I’ve ever seen of my favourite piece of Brechtian Epic Theater. It was influenced by both Euripides’ Trojan Women and Aristophanes’ Lysistrata.  Josie Lawrence is remarkable as the woman whose real name was Anna Fierling: Courage got her nickname after braving the non-stop bombardment of Riga to keep on selling bread.

Brecht invented the term episches Theater in 1926 because he wanted a new type of non-realist drama that would make audiences think about class oppression rather than sentimentally relate to characters’ plights. But I clearly don’t know how to appreciate Brecht. I ended up with wet eyes both when Courage is forced to disown the corpse of her son Swiss Cheese and when her daughter Kattrin is shot dead at the end.

The ancient Greeks rarely used the adjective ‘epic’, epikos, even to describe poetry. Their noun epos, plural epea, which in Mycenaean times still had its initial w, wepea, meant words of any kind, but especially significant words such as those used in prophecies or promises. Nowadays epic can just mean ‘notable’.

I also wrote a review, published in the Guardian Wednesday, of Stephen Fry’s charming new retelling of classical myths mostly drawn from epics: Hesiod’s Theogony and Ovid’s Metamorphoses. And I was delighted to read the excellent new book, developed out of a doctoral thesis I supervised, by Miryana Dimitrova. It discusses sources, including Lucan's epic Pharsalia, for Julius Caesar's own epic afterlife on the stages/screens of the world.  This means I have engaged within 5 days on almost all the major classical epics besides the Argonautica. It certainly feels appropriate to describe my own exhaustion today as wepic.

I’ve been on a lot planes lately, and so am unusually sensitive to manspreading at the moment. This week I spoke at Policy Exchange, a Westminster Think-Tank, on the enduring relevance of Martin Bernal’s Black Athena (1987). I was manspread (manspreaded?) like never before by Tory MP Kwasi Kwarteng. I note that I place my hands in a defensive-rampart postition. He also verbally interrupted me, but he wasn't alone in that. 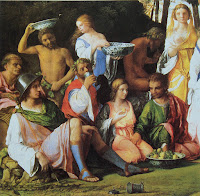 The verb 'manspread' was not added to the Oxford English Dictionary until 2015, but my brief investigations of sitting postures in the history of art suggest that it is not confined to modernity. In Giovanni Belloni's 1514 'Feast of the Gods', for example, poor Amphitrite is wedged between a groping Neptune, and a manspreading Mercury. The satyr in the red cloak behind her looks as though his knees are pressing into her bottom, too. Her straight-ahead gaze suggests she is not enjoying her quince. It's supposed to be an aphrodisiac, but I don't think it's working. 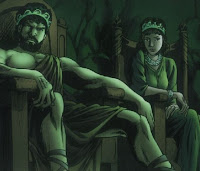 More recent pictures of classical deities portray similarly exaggerated manspreading, for example this Hades and Persephone. Her hands are doing what mine were.

My hasty research into sitting etiquette in ancient art today suggested, however, that in ancient times themselves it was by no means as obviously gendered.


In  ancient Mespotamia and Egypt, for example, I have only (so far) found depictions of men sitting with their knees considerately together next to women in the identical posture. 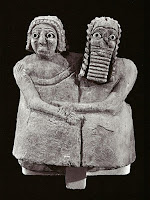 Indeed, the Mesopotamian woman seems to feel able to wedge her knee further into her boyfriend's space than he does into hers. The Egyptian couple look perfectly at ease: mutually touching elbows but legs nowhere near in contact. 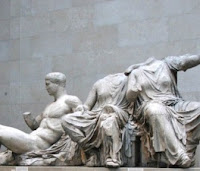 The East Pediment of the Parthenon sculptures, probably depicting Dionysos, Persephone and Demeter, suggest that spreading was in Pheidas' day a matter of status:  all the gods, whatever their gender, are letting their knees loll apart regardless of what anyone else thinks. This would cause quite a difficult situation on Easyjet. 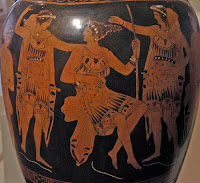 And here is Atalanta, admittedly not the kind of girl to be told not to do anything, let alone not to sit like a man. But her refusal to cross her legs or squeeze her knees demurely together doesn't seem to be disapproved of by the artist as a woman sitting like that would be censured today.

My final piece of evidence is the so-called 'Capitoline Triad' of Juno, Jupiter and Minerva. It is true that Jupiter has his knees casually apart, but he is not extending either leg into his wife or daughter's space. And they both apparently feel free to sit with their knees relaxed and apart, just like him. 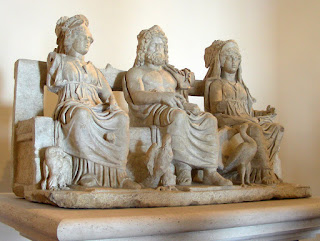 Does this mean that we have actually gone backwards since the Renaissance in terms of sitting etiquette being dictated by patriarchy? I am certainly having a hard time figuring out how to translate 'manspread' into ancient Greek.*

Week of the Unaccountable Oligarchs 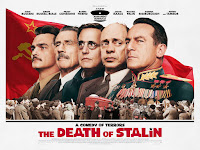 A week where the full de-democratisation of Higher Education governance came sharply into focus for me after I watched the brilliant movie Death of Stalin, in which a cabal of unaccountable fellow oligarchs battle it out over control of the Politburo. 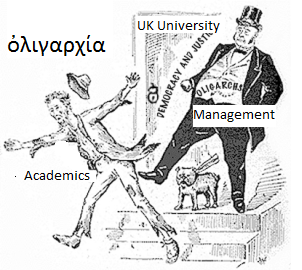 Management at our universities often takes no account of what even its most senior academic staff advise, even when they do it in unison. When challenged, as one was challenged by me this week, these unelected ‘leaders’ even admit it, implying that  it is fine for them to take (usually ill-informed) unilateral decisions with far-reaching implications.

What I do not understand is why Senior Leadership Teams and SManagementTs (unaffectionately known as Sluts and Smuts) bother going through the motions of consultation.  It is a sign of the times that I fear to say more because I want to keep my job for a few more years.

I often feel guilty that in the 1990s, along with many other academics who might now be in positions of institutional power, I decided against climbing the management pole. I preferred to concentrate on the real business of university life: teaching, research, and communicating with the public. But that was before any of us realised that we were about to be annexed by a new professional Management Class who regard our views as worthless and our consultative procedures a Jurassic inheritance completely at odds with their commercialised concept of education and intellectual labour.

I also heard this week from an excellent middle-aged classicist at an English university, a man for whom I write references, that he and one other lecturer have been made redundant as of 30th June 2018. This would be bad enough at the best of times, but in this case he had only recently signed a contract for a full-time continuing post. He had given up some other non-recoverable lucrative teaching contracts in order to accept it. Some administrative cock-up at Management level meant that the financial implications of the appointment were realised in the local Kremlin far too late, and so two individuals’ futures have been abruptly and arbitrarily sacrificed.

I may not be hearing the sound of physical corpses being kicked down the back stairs by the KGB. But the movie seems painfully relevant, and not only to the Tory Cabinet.