Escape to Asclepieion! On Visiting Greece at the Right Time

Despite unprecedented Brexit/Trump shithousery at home, or perhaps because I had escaped it physically, this was my best week of 2018 so far. The theatre at Epidauros as usual took my breath away, even though my scheduled lecture in the Small Theatre was doomed by a sudden thunderstorm to be relocated, inappropriately, to an indoor baseball stadium with a tin roof.

This meant I literally had to shout my lecture on Why are the Erinyes/Furies Gendered Female? at the very top of my voice. My international audience didn’t look as terrified as they should have.

Then to Rhodes where hundreds of Australian lawyers of Greek ancestry had invited me, along with Profs. Paul Cartledge and Adriaan Lanni, to tell them about the Athenians’ amazingly democratic legal system. Up first, I chose the comedic tactic and enacted, solo, all the roles in the trial in Aristophanes’ Wasps in which one household hound prosecutes another for stealing a Sicilian cheese.

The Chief Witness is the kitchen’s Cheesegrater, who witnessed the crime being perpetrated and is Chief of Household Accounts. This is actually our best evidence for procedure in fifth-century Athenian courts. Since the death of our wonderful cat Sam last month, which upset me far more than I anticipated, we now have only one cat and one dog, but I intend to reenact the scene upon return home tomorrow.

Then a strange night in a demotic bar watching Croatian footballers hammer Englishmen. I was in company with a Croat, my English daughter, several Australians and many Greeks (a night in which I gradually started supporting the Croatians because of their True Grit). The fun started when I discovered the best thing in Rhodes Archaeological Museum: THE STATUES HAVE HEADS ON. Most were guillotined by iconoclastic early Christians, but on Rhodes they considerately left the heads lying around to be stuck on again later.

In Kos, founded by Asclepios-worshipping Epidaurians long ago, I took my arthritic left knee to show to the Healing God in his magnificent sanctuary, where Hippocrates, the great medic of the Greek Enlightenment, practised his craft. I did not have time to sleep over ("incubate") in the Asclepieion and experience visitations from gods in my dreams, but my knee has felt better today.


Nor did I have a cock to sacrifice there, like the women in a little-known poem (no. 4) by the Koan poet Herodas who describe Asclepios’ Koan altar, but my conversation with one of many local ginger tomcats seems to have done the trick.

Now watching the World Cup final in Fiumicino Airport, Rome, before returning to Blighty and Brexit Blues later tonight. I have suspended Reality for nine whole days. “It” may not be coming home, but I am, albeit reluctantly.

Enlisting Lucian in the Aristotle vs. Neo-Stoic Debate

I marked the publication of my book Aristotle’s Way with an article on his route to happiness in the excellent free online magazine Aeon recently. My inbox has since been crammed with protests from people who call themselves Stoics.

I argued that Aristotle’s Peripatetic ethics and natural science stress that humans are animals, even if advanced ones, who need to live together in communities, solve problems, figure out how to live well, respect other life forms, and (in appropriate contexts and degrees) embrace rather than renounce pleasure, physical appetites and emotions like anger. This makes Peripatetic thought better suited to the lives of normal modern homines sapientes facing social-political dissolution and environmental crisis than the austere, self-focussed and pessimistic worldview of the Stoics. 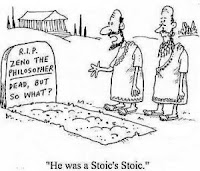 The behavioural-therapy methods that today’s self-styled Stoics recommend on their websites and courses to their adherents are harmless. But this is a branding issue. I just can’t locate these ideas in any of the ancient texts and fragments of the dozen major Stoics. This applies all the way from Stoicism’s founder Zeno of Citium and Cleanthes his successor (perhaps the most anti-joy of them all) to Marcus Aurelius and Gaius Musonius Rufus, who recommended withdrawing from society altogether.

I’ve just found an ally in Lucian, the Syrian who wrote satire in Greek. His neglected satire Philosophies for Sale describes how ordinary people in the 2nd century CE saw each famous school of philosophy. Zeus and Hermes organise an auction of personifications of these schools.

Pythagorean Man is vegetarian, hairy, and silent. He propounds reincarnation, the music of the spheres, and numerology. The Cynic practises scathing humour and asceticism while renouncing home, family, society and material goods. The Epicurean also retreats from the world of affairs but devotes his life to the maximisation of pleasure experienced at leisure. These philosophies are presented as daft and inapplicable to everyday life.

Democritean belief points to the atomic basis of the physical world; Heraclitans stress fire, flux and change; Socratic thought assumes that our world is a material copy of an eternal world of ideal forms; Sceptics question every assumption, including the belief that we exist. These schools of thought are useless for ‘regular folk’ as well.

Stoicism receives a longer treatment. You can spot a Stoic because he looks miserable, is self-regarding, claims to hold the monopoly on wisdom, courage and justice and that he alone is fitted to be ‘king, orator, millionaire’ (it was the favoured philosophy of fabulously rich Romans such as Seneca): Stoicism works less well for workers who don’t aim to be Top Dog, such as the cook, tanner and carpenter. Stoics are often found in financial industries; they argue that men have little control over fate and that the universe will self-combust. Stoics welcome hardship and endure it rather than pursuing solutions. Stoics teach using deliberate obscurantism in logic to foil opponents' arguments.

But the last school to be studied is presented in a radically different, positive light. Peripatetic philosophy encompasses all branches of knowledge. The Peripatetic is ‘temperate, good-natured, easy to get on with’ and publishes his thoughts in two modes: both ‘esoteric’ specialist treatises and ‘exoteric’ popular pamphlets written so that non-philosophers can understand.

The Peripatetic divides good things into three categories: those internal to the mind/soul (the most important), bodily and circumstantial. He promotes wonderful books on the natural world, especially the environment and zoology, biological reproduction, and what distinguishes man from other animals—all knowledge which is ‘as useful as it is ornamental’.

Lucian of Samosata had no vested interest, as far as I know, in promoting Peripatetic thought. But he was an informed, lucid and perceptive thinker. I am excited to find him in agreement with me as I try to make the surviving, advanced treatises of Aristotle as accessible to every cook, tanner and carpenter—that is, as ‘exoteric’—as possible.
Posted by Edith Hall at 09:19 2 comments: