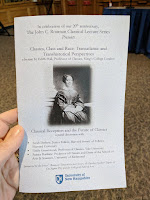 Last week I gave the Rouman lecture at the University of New Hampshire on the theme of Race and Class in the Classics Academy. I was honoured to speak alongside Professors Sarah Derbew, Emily Greenwood and Patrice Rankine. I took my cue from a young academic named Kelly Dugan at the University of Athens, Georgia, one initiator of the Multiculturalism, Race and Ethnicity Classics Consortium (MRECC), who who has recently tweeted that as a white woman she identifies her work as ‘solidarity pedagogy’.


I’ve adopted the term ‘solidarity research’ to describe my forthcoming work with Dr Henry Stead on Classics and the British class system. Groups who have historically been excluded from the Classics Academy, whether by race or class, and scholars sensitive to such exclusion, will better recreate our subject so that it is half-way fit for the 21st century if we mutually support one another.

The question of race in the discipline has exploded since the annual meeting of the American Society for Classical Studies at the San Diego Marriott Marquis & Marina between January 3rd and 6th, 2019. I was not there but have studied different responses to what happened. Two young people there to receive an award for their work on the SPORTULA, an initiative raising money to give study grants to what they call ‘working-class and historically looted communities’, Djesika Bel Watson and Stefani Echeverría-Fenn, were racially profiled by hotel security. An independent scholar named Mary Frances Williams said publicly that fellow panellist Professor Dan-el Padilla Peralta got his job at Princeton because he was black.

Padilla Peralta subsequently published an eloquent online essay expressing sadness that ‘no one in that room or in the conference corridors afterwards rallied to the defense of blackness as a cornerstone of my merit’. The paragraph that marks a truly historic turning-point in our subject is this: 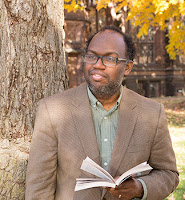 … my black being-in-the-world makes it possible for me to ask new and different questions within the field, to inhabit new and different approaches to answering them, and to forge alliances with other scholars past and present whose black being-in-the-world has cleared the way for my leap into the breach.. all our intellects take shape and evolve within national and global force-fields of race and racecraft.

I take his insistence that people should be hired because they are not white as the most important public statement in Classics for decades. I have believed in this principle since undergraduate days, but have hesitated to make the case outside in-camera appointment committees because I am a white middle-class woman and have not thought it was my place. Now that Pedilla Peralta has gone first, I will be doing so.

Most HE institutions and classical subject associations internationally fail to support ethnic minorities in career progression. I have witnessed several UK appointments where a brilliant person of colour, despite possessing the qualifications to make the shortlist, has not been offered the job. Wholly spurious grounds expressed in the language of alleged positions in intellectual hierarchies have been adduced. The result is a relentlessly white UK Classics academy in the UK; the few exceptions struggled to get where they are, and most have not been promoted as high as they deserve.

There is also a continuing failure to acknowledge the historical role of the discipline as the curriculum of the white ruling classes of Europe and their global empires.  I have been refused funding for conferences and research projects only for those addressing colonialism, race, gender and class.

Professor Mary Beard’s plenary lecture at the Society of Classical Studies was taken to task by Padilla Peralta for occluding Classics’ role as the curriculum of empire. She stressed that people studying classics at Cambridge in the late 19th century often became benign schoolteachers at home in Britain rather than colonial administrators in Africa, India, the Caribbean or any of the dozens of other territories in their empire.

There are two problems here. The first is the implication that teachers play no role in reproducing oppressive views in their charges. The second is that evidence beyond late Victorian Cambridge undermines her inference. Of the sixty-one boys born in 1798-9 who studied Greek and Latin at Aberdeen Grammar School, more than two-thirds worked and/or settled abroad, in places including China, India, the West Indies, Australia, Canada, Java, and Sierra Leone.
My lecture argued that the transatlantic history of Classics includes many examples of solidarity research and pedagogy to inspire us today. The white Greek scholar Julian Hibbert funded the legal defence of the mixed-race Jamaican radical Robert Wedderburn on trial for blasphemy after Peterloo, and provided arguments from Plutarch’s On Superstition for the defence speech. Sarah Parker Remond (pictured above in the conference ad), from Massachusetts, was supported in the early 1860s by British classicists including the socialist Professor Edward Spencer Beesley, when she was campaigning against slavery in Britain and studying Latin at Bedford College.
There is good news today, as well. Groups are emerging to create a Classics fit for purpose. Besides MRECC, Professor Sasha-Mae Eccleston (Brown), with Padilla Peralta, and others including my KCL colleague Dr Rosa Andujar, who is Dominican like Padilla Peralta, are organising transatlantic workshops under the title ‘Racing the Classics’. We all need to listen hard, sustain international networks of solidarity, and get these ideas out beyond Higher Education. By ‘we’ I mean all those who want to see Classics in the vanguard of the modern academy rather than an embarrassment to it.