A diversion this winter has been gigs with London Uni psychoanalysts. On Saturday I had to explain Sophocles’ Antigone’s relationship to psychoanalysis, which has roots back in Hegel’s Phenomenonology of Spirit, in 35 minutes flat. 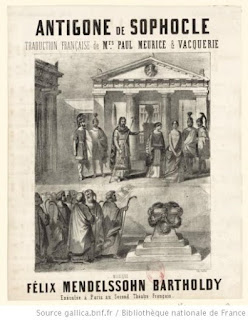 Billions of earnest words have been published on the topic. I was so proud of my precis-ing skills, since Hegelians and psychoanalytical theorists waffle, that here's a 3-minute version.

In 1959 Jacques Lacan’s L'éthique de la psychanalyse took Hegel’s boring old-fashioned politics and ethics out of the play and celebrated the ‘unbearable splendour’ of Antigone’s uncompromising devotion to the law of her own ‘pure desire’. Its object is her dead, irreplaceable brother. In prioritising the male sibling she re-enacts the incestuous desire of her mother’s desire for her son Oedipus.

In 1974 Lacan’s student Luce Irigaray rebelled. her Speculum of the Other Woman put the ethics and politics back into Antigone by proposing that the entire method and model of Freudian psychoanalysis was repressively phallocentric. Antigone’s claim that her brother cannot be replaced undermines the theory that all relationships with the opposite sex are substitutions for the attachment to the opposite-sex parent. Irigaray’s Antigone makes a profound feminist challenge to the psychoanalytical establishment.  Lacan did not wall Irigaray into a cave but he did expel her from his École freudienne. 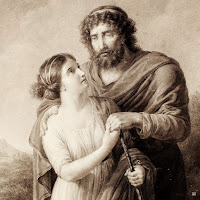 But the text that has made Antigone a cultic figure on campuses was Antigone’s Claim (2000) by Judith Butler, an academic rock star.  She says that if psychoanalysis had been founded on Antigone’s experience rather than her dad Oedipus’s, we would have had a properly politicised psychosexual subject all along. Patriarchy would have been at the centre of psychoanalysts’ radars. Antigone’s own muddled genealogy challenges patrilineal thinking, and, by assuming ‘male’ behaviours, she subverts heteronormative values. She is the ideal hero for genderbending and feminist millennials.*

Irigaray and Butler perhaps illuminate why Sigmund Freud didn’t write much about  Antigone. But he did give the nickname to his dutiful daughter Anna, claimed she had no sex drive, and encouraged her to follow him in the profession, avoid marriage, and stay in the paternal home.  I hope it wasn’t him who asked her to wear a costume from The Sound of Music. If my therapist had dressed like that, I’d never have got interested in psychoanalysis in the first place.