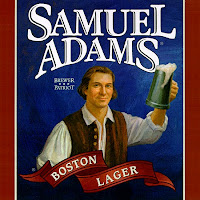 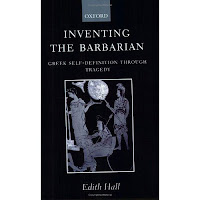 This week, besides moving the academic books I own from Royal Holloway to my new office at King’s College, London, I discovered that the first book I wrote myself has been censored in a Colorado gaol. One of my PhD students, Katie Billotte, sent a copy of Inventing the Barbarian: Greek Self-Definition through Tragedy (1989) to a pen-pal of hers currently detained in a Colorado gaol.
Alex Perez is a phenomenally committed self-educator. He was convicted at 18 for a drug-and-gang-related murder. But he acquired his taste for reading, especially Sophocles and Aquinas, while spending SEVEN YEARS IN SOLITARY CONFINEMENT, appealing (in the end successfully) against an accusation that he committed another murder inside.
But my sedate little monograph, an Oxford University thesis supervised by the extraordinarily conservative Sir Hugh Lloyd-Jones, was sent back to Katie from the Wardens's Office at Crowley Correctional Facility, with the following letter:
'We are returning to you this shipment made to Inmate #90704 currently held in the Colorado Department of Corrections. We have determined that Inventing the Barbarians by Edith Hall constitutes contraband under the State of Colorado's Revised Statute. It has been determined by the wardens of this facility that the primary or secondary purpose of the author was to compromise the good order and efficient operation of a facility under the jurisdiction of the Colorado Department of Corrections. Please note that any further attempts to introduce this item into any facility currently operated by the Colorado Department of Corrections will be referred to the Office of the Attorney General.'
Katie has since phoned Crowley Correctional Facility, and has been told they are concerned that her PhD supervisor advocates gang membership. My answer to this would be that it depends entirely on what sort of gang.
I would certainly join a gang which existed solely in order to defend people’s rights to educate themselves when incarcerated and read the great works produced by the human brain in e.g. ancient Greece and Rome. After all, Socrates read Aesop in gaol; Nelson Mandela read Antigone, as celebrated in Athol Fugard's anti-apartheid play The Island.
One such gang, to which we can all send our spare books or those we think might be useful for prisoners, can be found mustering (or whatever gangs do) at http://booksthroughbars.org/.

It is probably unwise of me to write this blog the night before I attempt to enter the USA at an airport in Washington DC, especially since a few years ago I was given a very hard time by Immigration Services at Newark Airport, New Jersey.
My copy of the Odyssey in Greek was misidentifed by a very young man with a very large gun as a subversive text in Arabic. He did back off, however, when I told him the story of the Cyclops and he recognised a character from X-Men. The Odyssey then escaped the label of contraband, even if the vastly inferior Inventing the Barbarian now hasn't.
Posted by Edith Hall at 20:00 3 comments:

On Fig-Leaves and Victory

The news that there will be no lost posts  in Classics at Royal Holloway arrived on my phone in Belfast on Friday, as I was looking at this brilliant banner. The wit of the tailors’ union in that city made me laugh out loud. If you are going to make a public statement of pride in your needlecraft, you could have chosen any famous garment in history—Joseph’s coloured coat or Sir Walter Raleigh’s cloak.


But what better than a discomfited sub-Cranachian Adam and Eve, set in a fine fabric of Irish green, trying as in Genesis 3.7 to sew fig-leaves together for an improvised loincloth? The underlying message of this image is not only funny but really quite subversive, especially for a civic community identified with fundamentalist bible-thumping.


Wit (not usually associated with the Left) can be a wonderful weapon in politics. This has been shown throughout the campaign not only by our speakers at the event on September 16 (Natalie Haynes and Tom Holland in particular) but by the extraordinary work of the University and College Union branch at Royal Holloway, as well as of SURHUL, the students’ Union.


I am thinking particularly of the impromptu country walk and photo-shoot organised by the UCU the day of the November 2011 Council Meeting, and the Thoughts of Chairman Paul posted in Management Corridor during the occupation (e.g. when asked whether he thought he was worth his enormous salary, he showed how out of touch he was with the workload of his academic staff by responding, 'I work hard. I am sometimes here until 7.00 pm').

Early in the campaign a secret supporter, a former Principal of a college of London University, emailed me wise advice: once the management is on the retreat, you must make absolutely sure that you 'allow them a fig-leaf' to cover their embarrassment when it has become publicly obvious that their strategy was misjudged.  Otherwise they may turn REALLY nasty.


The metaphor of the fig-leaf as representing the transparently meretricious defence argument adopted by those who know they have no real case was used in English as early as the turbulent year of 1648, when the Presbyterian and anti-Parliamentarian minister William Jenkyn, a ‘sententious, elegant preacher’, excoriated an opponent for making ‘a meere Figg-leafe defence.’


RHUL Management have certainly needed a fig-leaf.  Their assault on Classics is  internationally known to have cost a lot of money, traumatised staff, wrecked internal relationships, and damaged this year’s  ‘Student Experience’ and possibly applications. It has also made it difficult for staff to conduct the research needed in time for the Research Excellence Framework assessment. It has lost the college a Classics Professor who has published a lot of books in the relevant REF years, along  with seven PhD students in ancient drama (almost the entire Research cluster in that field).


For several weeks now, the Management’s much-needed fig-leaf had been the remaining threat of a single possible redundancy in 2014.  But this week a new, shinier fig-leaf transpired in the form of the offer made to Dr Jari Pakkanen in Classics, our distinguished Greek archaeologist, who is to be Director of the Finnish Institute at Athens for two to four years and therefore have his salary paid temporarily by another body.  Layzell and Partners plc have applied this fig-leaf with almost indecent haste, even guaranteeing Jari his post when he returns.They have decided to attack as 'unprofitable' the college bookshop and nursery (yes, unbelievable, I know) instead.
But I would like to defend the humble fig-leaf. In Turkey they make their dolmades with fig-leaves rather than vine-leaves. Stuffed fig-leaf is one of the oldest ancient Greek recipes we possess, a dish called thrion (eggs, flour, honey and cheese baked in a wrapping of fig-leaf), mentioned in Aristophanes’ Acharnians in 425 BCE, a comedy celebrating the triumph of humane values over crazy aggressors and profiteers.  I am about to go and cook thrion for breakfast to celebrate our victory. Yum.
Posted by Edith Hall at 10:09 1 comment:

Today (Saturday March 3rd) the Syrian army has renewed its onslaught onto the rebel city of Homs, known to classicists by its ancient name, Emesa.  One famous Emesan was Julia Domna, the philosopher  whose marriage to Septimius Severus eventually made her Empress of Rome. Another was Heliodorus, author of the longest and most flamboyantly written of all the extant ancient Greek novels, the Ethiopian Story. Emesa made history again when the decapitated head of John the Baptist was miraculously rediscovered at a nearby monastery in the year 452. 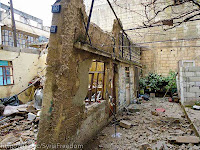 But today bombs and shells are thundering down onto the terrified people of the south-western Homs suburb of Baba Amr. After a siege which lasted nearly four weeks, the government has sanctioned indiscriminate reprisals. Troops have been setting fire to houses with people in them. There are reports of every male over fourteen being rounded up, small children shot dead, torture, rape and public beheadings. 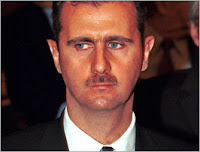 It makes it seem even worse that Bashar al-Assad, the President of Syria with the petulant mouth and joyless eyes, was trained in a caring profession as a doctor. I wonder how his (publicly loyal) wife Asma really feels: although she was raised in Britain (she studied at King’s College London and worked as an investment banker) her own parents come from Homs.
If al-Assad had studied history rather than medicine, he would be more careful what he did to Homs. Its people are tough. Under the Romans, the ancient Emesans succeeded in exporting their indigenous Syrian cult of the Sun, which centred on a sacred black rock (probably a meteorite). Subsequently, Homs has survived battering by countless brutes and tyrants.
In the mid-eighth century, it held out for months when besieged by the Damascene ruler Murwan II.  It revolted continuously against the Baghdad-based Abassids, who sent innumerable punitive expeditions during the ninth. In the tenth, its people were terrorised, raped and slaughtered by the Byzantines. It resisted the Frankish First Crusaders, and then the Damascene Nur ad-Din in 1149. It survived endless Bedouin assaults between 1600 and 1800 under Ottoman rule. Homs rose up violently against Egyptian domination in 1839.
But al-Assad should also remember what happened to a tyrant whose family actually came from the rebel city. The juvenile Roman Emperor Elagabalus, the great-nephew of Julia Domna, also had a petulant mouth and joyless eyes. He survived as emperor for less than four years between 218 and 222. In that time he outraged both the Senate and the People, imposed unpopular religious ceremonies, devalued the currency, appointed his cronies to fabulously lucrative high offices, flaunted a decadent lifestyle and brutally suppressed opposition.
But he was assassinated by disaffected soldiers. His corpse was decapitated, stripped, dragged across the city, and thrown into the river. He had well deserved what Edward Gibbon in the sixth chapter of The Decline and Fall of the Roman Empire called his reputation for ‘inexpressible infamy’.
The people of Homs are amongst the poorest in Syria and have been subjected to some of the worst of the regime’s persecutions. Homs has become a magnet for defectors from the Syrian Armed Forces who have transferred their allegiance to the Free Syria Army. They may be temporarily in retreat but they will not give up. I very much doubt if al-Assad will last another four years. Inexpressible infamy is already his.
Posted by Edith Hall at 12:11 No comments: