The death toll of migrants at the borders of Europe just keeps on rising. More than three hundred thousand have tried to cross the Mediterranean Sea this year, already 40 per cent up on 2014. The International Office of Migration has confirmed 2,432 deaths ‘associated with the sea crossings’ in 2015. Many more people have disappeared. ‘Associated’ deaths and disappearances mean DROWNINGS, of which more anon.

When we do get serious information about conditions in Syria or Eritrea it becomes obvious why so many are leaving. Faced with barrel bombing, starvation and homelessness, let alone arrest or compulsory conscription,  I would be the first to risk death in exchange for some hope of a decent life for myself and my children.

As I write, the TV screen witnesses to the despair of people rescued from the boats which capsized yesterday off the Libyan coast. Scores of orange body bags fluoresce on the Zuwara docks. The estimated fatalities from Thursday already amount to two hundred. I just can’t understand how the drownings can keep on coming while the world looks on.  We may try to wash our hands clean of the toxic fallout from 500 years of colonialism plus 25 of ill-considered ‘western intervention’ in sovereign states. But posterity will despise us to a man and woman for our pathetic inaction now.

Nor are we hearing enough about the horror of death by drowning. Each one of those body bags contains a story of a terrifying and excruciating individual death. Drowning survivors report extreme pain in the upper chest, spreading down the lungs and arms, compounded by cramps in the legs, choking, and searing pressure on ear drums and eye balls. This agony can last for up to eight minutes before consciousness is lost.

Drowning is so vile that it has been used as a form of punitive capital punishment and in Guantanamo as a method of torture. The earliest extended description of a drowning comes in a triumphalist ancient Greek poem by Timotheus celebrating the death of a member of Xerxes’ forces who couldn’t swim and suffered terribly before expiring at the battle of Salamis. I.e. drowning is a death you do wish on your worst enemy.

In an obscenely first-world way, in Greece on Tuesday I experienced the terror that comes before being overwhelmed by the Mediterranean. As a privileged touristic swimmer, I stupidly assumed that I could front-crawl my way through some huge waves in a high wind against prudent expert advice. I did win my battle with the sea, just, but have a badly strained shoulder muscle as a reward for my hubristic recklessness. Feeling chastened in every sense.
Posted by Edith Hall at 18:13 No comments:

Feeling glum about the prospects for democracy in either Greece/the EU or the UK Labour Party, I sought solace in visiting the location of an exciting scene from the defence of democracy in ancient Kerkyra (Corfu).


The plan was to find some tiles on the island in order to help me reimagine, if not reconstruct by nifty photo-montaging, my favourite sentence in the ancient historian Thucydides’ History of the Peloponnesian War.

During the civil war in 427 BCE, there was a street battle in Corfu’s main town between the groups supporting the oligarchs and the democrats respectively. Thucydides, whose usual policy is to ignore women, describes how not only slaves but women on the democratic side joined in the actual fighting: ‘the woman also entered the fray with great daring, hurling down tiles from the roof-tops and standing up to the din with a courage that went beyond what was natural to their sex’ (3.74).

Having identified as venue an antique central street with plenty of promising tiled roofs, we went to the island’s famous Archaeological Museum hoping to photo a tile or two from the fifth-century BCE. Guess what? The Museum is now closed indefinitely. A huge padlock and chain locks its gates. The sign lies in the dust, already rusting.

The staff, as public servants, cannot be paid thanks to the Eurocrats who worship Kapital and despise Greek democratic processes. So the very cultural resources underpinning the tourist industry, crucial to any prospect of Greek economic recovery, are being made unavailable through Austerity.


I tried to console myself with online images of the indomitable animal-taming Artemis, from the magnificent western pediment of the archaic local temple, which tourists like me can no longer see at the museum. I like to think it was she-god images like this which inspired the democratic women of 5th-century Corfu to put two fingers up—and throw tiles down—at the rich elite forces opposing them.  Eurocrats beware: offending Artemis is always risky. Just ask the Atridae.
Posted by Edith Hall at 07:41 1 comment:

Success greeted my quest for the missing memorial to a Greek scholar who in 1762 published a fine translation of Xenophon’s Memorabilia and Apology of Socrates. Long hidden from intellectual history, Sarah Fielding really is right there, inside the North-West vestibule of Bath Abbey. 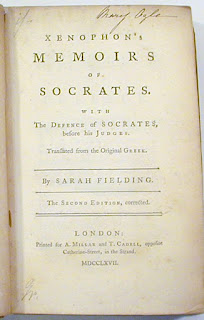 Part of the inscription reads ‘Athens’ Wisdom to her Sex she taught’; but it wasn’t only to her sex. Plenty of men used her translations; her Apology, chosen for the Everyman series, was reprinted until 1937.

Her Etonian brother Henry, playwright and novelist, was envious of her largely self-taught classical skills. His fame has overshadowed her completely. People also suspect that the classically educated but immoral and dissipated Molly in his novel Amelia is a covert attack on his clever sister.

People inevitably alleged that even Sarah's bestelling novel David Simple was really Henry’s work. Elizabeth Carter, the translator of Epictetus, had no reason to talk up her reclusive friend, which might have taken the lustre off Elizabeth's own reputation as the best woman Hellenist around.

Sarah had loved Henry dearly, and when his wife died she moved in with him in Lincoln’s Inn Fields to help with the house and children. He responded by impregnating the scullery maid. Sarah moved out. Most men called her ‘poor Sarah’ because she never married; women called her ‘poor Sarah’ because she was an eccentric, couldn’t cook, and allegedly tippled.

She also wrote the first book specifically for girls, The Governess, or the Little Female Academy (1749),* and biographies of Cleopatra and Octavia. But when she died, she disappeared. There is no known likeness. This made finding the memorial stone important, partly because Dr Rosie Wyles and I need a picture to put in our forthcoming Unsealing the Fountain: Women Classical Scholars (OUP).

Several antique guide books claimed it was in Bath Abbey, but nobody there knew what I was talking about. Other literary historians have been unable to find it. The reason is that it is low down, concealed by a heavy lectern, probably for decades.  Our sharp-eyed teenager spotted just the name SARAH peeking over its top; after moving it (fortunately the Abbey attendant nearby was not officious), teenager’s father photographed her. The snake encircling Sarah was the pet of Athena, goddess of wisdom, and (because it sheds its skins) an ancient symbol of immortality.

Mission accomplished, we went to the pub and raised a toast to the scholar celebrated by her close friend Dr John Hoadly, who commissioned the memorial, for her ‘unaffected manners’, her candour and benevolence. An exciting afternoon’s work.

Text of the Memorial Stone
In this city lived and died Sarah, second daughter of General  Henry Fielding; by his first wife, daughter of Judge Gould. Whose writings will be known as incentives to virtue, and honour to her sex, when this marble shall be dust. She was born mdccxiv. and died April mdcclxvih.

Her unaffected kindness, candid mind,
Her heart benevolent, and soul resign'd,
Were more her praise than all she knew, or thought.
Though Athens' wisdom to her sex she taught.

The Rev. Dr. John Hoadley, her Friend, for the honour of the Dead and emulation of the Living, inscribes this deficient Memorial of her virtues and accomplishments.