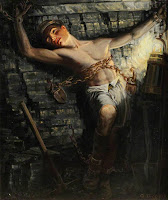 I still don’t know how I got through my entire BA without any lecturer ever pointing out this ancient text to me. I stumbled upon it as a PhD student. But I do know that I would very much rather work, as Peter Cook put it, in the absence of falling coal.
Posted by Edith Hall at 17:01 No comments:

Plebgate and the Wisdom of Catiline


John Gay, author of The Beggar’s Opera, said that the person ‘who deals in slander, lives in strife.’  I am amidst strife caused by emails from self-important individuals protesting against something I said, live, on the BBC on 24th September 2012.  I was talking about the Conservative MP (and then Government Chief Whip) Andrew Mitchell. I rashly said that I ‘KNEW’, rather than merely BELIEVED IT PLAUSIBLE GIVEN HIS SCHOOLING AND PERSONALITY, that Mitchell had used the word ‘pleb(s)’ when abusing members of the police force.

I made a mistake. Nobody knows whether Mitchell said it or not. The CCTV footage is inconclusive. Other characters and factors have emerged, some of them shady.  Mitchell may be lying, but so may the police.  Both politicians and police, I BELIEVE, tell lies all the time.

I am therefore very sorry indeed that, like an incompetent Socratic interlocutor, I claimed to be in possession of knowledge, rather than a biased opinion, about Mitchell’s choice of words. I hope that saying so will persuade the reactionary tosspots who are crowding my Inbox to go away and Get A Life.

Slander is a real issue in any democracy: over-policing what people say extempore leads directly to suppression of freedom of speech and insidious, invisible censorship and self-silencing. But slander is also perniciously powerful, as every good spin-doctor knows.

Slander in the political arena is expertly dissected in the tragedy Catiline: His Conspiracy by Ben Jonson (1611).  One of Jonson’s chief interests, writing in the paranoid Jacobean world after the union of the crowns of England and Scotland and the Gunpowder Plot, was false accusations. He found a rich source in the Roman historian Sallust’s account of the conspiracy of Catiline and his disaffected followers to take Rome in 63 BC. Cicero saves the day, but only by judicious use of defamation, rumour and unprovable or false allegations.

Everyone involved in the Mitchell fiasco could now meditate on the wise words Jonson gives, paradoxically, to the ‘bad guy.’ Catiline refuses to get upset at false allegations:  ‘Where it concernes himself, / Who's angrie at a slander, makes it true.’  This has a double meaning. If you get angry at something which someone is saying about you, you EITHER prove that that there is truth in the allegation, OR concede that fiction has the mysterious power to damage you. 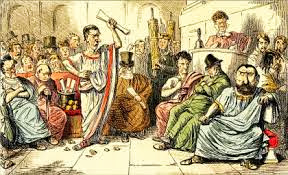 Why exactly are the Tories so angry that anyone imagines one of their leaders might suffer from class snobbery? Regardless of what Andrew Mitchell did or did not say, ‘Where it concernes himselfe, / Who's angrie at a slander, makes it true.’
Posted by Edith Hall at 09:42 2 comments:

What Pericles Knew about Health and Safety

Some big construction companies in the UK, notably Sir Robert McAlpine Ltd, have this week issued an apology to the thousands of building workers who, for at some point raising a single health and safety issue, were each named on a secret and wholly illegal blacklist shared by the corporations.

The apology and proposal to implement a voluntary compensation scheme are but cynical and self-interested preemptive measures against hundreds of potential legal challenges and huge enforced payouts to men who haven't got work for years.

The blacklist systematically excluded from building sites the very people with the sense to identify danger and the guts to speak up. Their presence might have helped diminish the horrific number of fatalities on British sites: 48 in 2011-12, 39 in 2012-13 but ALREADY  up 60 % on that so far this year.

The founder of Sir Robert McAlpine Ltd (a major Conservative Party donor and contractor of the Olympic Stadium) was a Scot sent down the mine at the age of 10. He should have known a thing or two about lethal danger in the workplace. Referred to in the trade as "Concrete Bob", he is also believed to lie behind Bob the Builder.

But that would be unfair to the fictional Bob, who insists on observing safety rules and would weep at the terrible injuries sustained by Michael O'Donovan (while labouring for McAlpine's macho multi-millionare descendants on the Arsenal Stadium), or the electrocution of a worker on The City of Glasgow College campus earlier this year.

Even the ancient Greeks were aware that building work was dangerous and that bosses needed to behave responsibly. According to Plutarch, when Pericles (who famously himself wore a hard hat round the clock) wanted to rebuild the Athenian Acropolis, he hired the voluntary labour of free poor citizens rather than coercing slaves.

When one--an energetic and committed employee--fell from the top of the Propylaea, incurring horrible wounds, Pericles was devastated. The doctors gave up on the patient, but Pericles received medical instructions from Athena in a dream. He personally saw to it that her instructions were implemented. The man recovered fully and Pericles set up a beautiful statue to Athena the Healer on the Acropolis itself.

I am sure Plutarch's picture of the powerful man personally concerned with the safety of manual labourers contains elements of fantasy. Many thousands of workers--mostly slaves--must have been killed in the ancient construction industries. But the very existence of the narrative, and of that statue symbolising the duty of bosses to look after the health of workers in their employment, shows an understanding of basic human decency conspicuously lacking from the companies who compiled that cynical blacklist. I will be sending a copy of Plutarch's Life of Pericles, together with a hoplite helmet, to Cullum McAlpine, charisma-free current Director of the company, later today.

PS Would the unknown individual who hacked into this blog this week and deleted it entirely, from a location in Plymouth, Massachusetts, please explain the reason?

The Ancient Sources of Monty Python's Life of Brian


Last week I upset some devout Poles. I recalled in a platform discussion of pagan myth that it was occasionally tricky growing up in a household shared by what I insensitively referred to as my ordained dad’s ‘imaginary friend’ (the Anglican god). I think this may have sounded more offensive in Polish, since the grim faces belonged to members of the audience with headphones, listening to the simultaneous translation. While I apologise to them (and to him) for any offence caused, the incident reminded me of the ancient sources of Monty Python's Life of Brian (1979).

The Pythons got the detail that Brian’s father was not God but a Roman soldier from a fragment of the Egyptian-Greek pagan Celsus’ The True Word. But the idea of the charlatan who rather accidentally gets identified as the Messiah by a gullible public comes straight out of a satire by the Syrian Lucian, Death of Peregrinus. This tells the life story of a philosopher called Peregrinus Proteus from Asia Minor, who, says Lucian, had in his youth temporarily converted to Christianity.

Unlike Brian, Lucian’s Peregrinus is difficult to love. He joins some Christians after strangling his father and two sexual misdemeanours force him to seek refuge in Palestine. The Christians are so gullible that he can convince them that he is a prophet. He becomes their leader, interprets and writes Christian books, and is honoured by them second only to the man ‘whom they still worship, the man who was crucified in Palestine because he introduced this new cult into the world.’

The local authorities arrest Peregrinus as a fraud, but his Christian flock still believe in him and camp outside the prison.  They bring food, read out their ‘sacred writings’, and invite supporters from all over Asia, ‘sent by the Christians at their common expense’. The speaker in Lucian’s text presents Christians as unintelligent ascetics who volunteer for self-deprivation and even prison. They ludicrously believe they are immortal, that they are all brothers, and that material possessions are of no account.

Life of Brian caused outrage when it was first released, and was refused screening in Ireland and Norway. It was not permitted to be publicly screened in Torbay, Devon until 2008. Lucian’s Peregrinus has faced a far longer history of proscription, being banned by Pope Paul IV’s Index Librorum Prohibitorum as early as 1559. 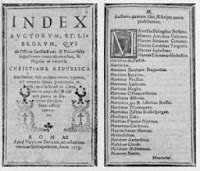 But the text which really horrified early Christians, and which might have led to a far more biting Life of Brian, was too scandalous to survive to modernity. The neo-Platonist Porphyry had himself once been a Christian, and after abandoning the faith became its most brilliant critic.

At the time of Diocletian’s persecutions (which the atheist ancient historian Geoffrey de Ste. Croix once described as ‘too little, too late’), Porphyry wrote a treatise Against the Christians. Its exposure of what he perceived as their intellectual confusion was so deadly that it was later banned by the Christian emperors from Constantine onwards and has been almost totally lost. If a copy is ever rediscovered, I doubt if anyone in Hollywood would today dare purchase the film rights.