Beards and Interfering in Cyprus

One upon a time there were no humans in Cyprus, only dwarf elephants. Greek-speaking people had certainly arrived by 1,600 BC. They are still there, speaking a beautiful ancient dialect of Greek, despite everything that history can throw at them.

Few places on earth have been so much interfered with. Everybody wants power over Cyprus because of its strategic location and (now) its supposed reserves of natural gas. But nobody has ever taken seriously the possibility that the tiny number of Greek Cypriots (well under a million) living on Aphrodite’s island might like a real say in their own political and economic future.

A quick run through the timeline of Cyprus introduces us to some of the most unsavoury imperialists and invaders in history. But the more successful of them all had beards.

The most handsome may have been the Hittite monarch Suppiluliuma, of whom an extraordinary statue has recently been alleged to have been dug up in Turkey.  But Sargon II,  whose beard was longer, annexed Cyprus to the Assyrian Empire in 709 BCE. The Egyptian Pharaoh Amasis, who did NOT sport a beard, grabbed it in the mid-sixth century, but the parvenu and bearded Persian Emperor Cyrus got it off him in 545.


Despite numerous attempts by the Cypriots to gain independence, their land was repeatedly lost and won by Alexander’s Successors.  Cyprus was briefly taken over for Rome by the smooth-cheeked Cato the Younger. But it was lost again when Mark Antony bestowed it on the (probably unbearded) Cleopatra, before she lost it too and it reverted to Rome. As part of the Byzantine realm, Cyprus was continuously harassed by bearded Arab invaders.

Adorned with plenty of facial hair, Richard the Lionheart arrived in 1191, and taxed Cyprus until it squeaked. He then gave it to the Knights Templar. The bearded Franks ruled Cyprus for a good while, followed by the bearded Mamluk sultans of Egypt, Genoese merchants, and the Venetians who purchased  the island in 1489. Eight decades later it was conquered by the bearded Ottomans. The Brits got back in the saddle in stages between 1878 and 1914, declaring Cyprus a Crown Colony in 1925, under the very hirsute King George V. It did not get independence until 1960.

This means that even before everyone in the world poked their noses in during the 1970s, Cypriot Greeks had been interfered with by Hittites, Assyrians, Egyptians (twice), Persians, Macedonians,  Romans, Byzantines, Levantine Arabs, Brits, Mamluk Sultans, Genoese, Venetians, Ottomans, and Brits again. But is the moral of the story that Cypriots need to grow some beards? Their hairy Orthodox priests have managed to exert a bit more power than most of them. The women who have ruled Cyprus (e.g. Cleopatra and Queen Elizabeth II) have always lost control of it. Ominously, the current government of Cyprus, to judge from photographs, is shinily clean-shaven.

I have  a collection of false beards  I once acquired during a student production of Aristophanes’ comic Assembly Women, in which the women of Athens need to disguise themselves as hairy men in order to get any say in politics. I am happy to send one to all Cypriot cabinet members if it would help them, finally, to get their act in gear and do something for the people they claim they govern.  The suspiciously smooth-faced President, Nikos Anastasiades, has a wife whose surname means ‘moustachioed’. The unbearded dwarf elephants became extinct. Nikos should take the hint.
Posted by Edith Hall at 19:42 1 comment:

Mary Beard is Britain’s most famous classicist. She is also Britain’s most prolific reviewer of books on classical subjects. As the Classics editor of the Times Literary Supplement for over twenty years she has chosen which books are reviewed,  which are passed over, and—more importantly—who should review.  She also contributes regularly to the London Review of Books and the New York Review of Books. She has thus acquired more power than anyone in history over the formation of public opinion on other classicists, as well as ancient Greece and Rome, at least amongst the chattering classes of the English-speaking world. In Confronting the Classics, she offers the reader a collection of thirty-one previously published reviews and essays, for the most part only lightly revised, dating back to 1990. They are book-ended by the excellent lecture Do Classics Have a Future? which she delivered at the New York Public Library in December 2011, and an afterword in the form of her manifesto on the art of reviewing and of selecting reviewers.

The book is subtitled ‘A provocative tour of what is happening now in Classics’.  A ‘tour’ it certainly is: one cannot fail to be impressed by Beard’s range of interests and ability to talk sense about all of them, from Minoan archaeology to Roman tombstones in South Shields inscribed in both Latin and Aramaic, or contemporary productions of ancient Greek plays to Astérix le Gaulois.  She writes with equal fluency about Art, Archaeology, History, and Literature, produced not only by Greeks and Romans but by many of their Mediterranean subjects and neighbours. The only field in which Beard treads tentatively, if at all, is ancient philosophy.  The book could well serve as an introduction to the entire field of Greek and Roman studies, usable by either the complete beginner or a previous convert. Since none of the essays is more than a few pages long, and forms a discrete window onto a particular topic, it is ideal for dipping into and browsing.

How Not to Do Cultural History

I haven’t done much tourism in Germany, but these eight Muses on the external frieze of the Renaissance art gallery in Erfurt are too good not to show.  Eight fat little boys inscribed with the Greek names of the Muses.


Nothing daunted,  I set about postulating explanations like a good academic. When was the frieze made? In 1562. Nothing I know much happened that year  except that the transatlantic slave trade was started by the disreputable English merchant John Hawkins who abducted the first shipload of Africans to the Caribbean.

Were the 16th-century Germans allergic to the number nine or prime or uneven numbers? No. Japanese don’t like the number nine, but German myth is full of it.

Did the 16th-century Germans despise epic? No, they had some fun male psychodrama epics like Herzog Ernst and The Lay of Hildebrand, although it is true they had mislaid the Nibelungenlied for a few centuries.

It struck me as possibly relevant that the Cherubim are the second rank of the nine biblical Choirs of Angels. This took me on a long detour via the Hebrew Torah, the terminally tedious Dionysius the Areopagite, Catholic Neo- Platonism and the baby boys in Italian Renaissance art called putti. But no solution emerged.

In desperation I asked a German friend. He had no idea. But he did mutter, fast and sing-song, “KLIO ME TER THAL EU ER PO KAL.“ This, he told me, is the not very catchy German mnemonic for the Muses’ names taught to schoolchildren. Clio, Melpomene, Terpsichore, Thalia, Euterpe, Urania, Polymnia, Kalliope. Kalliope comes last. The sculptor had started his frieze at the beginning of the mnemonic but ran out of space between his triglyphs before he got to the end.


This is an important reminder that history is usually determined by daft accidents. Moreover, individuals who create art never expect that someone centuries later will batter their brain cells trying to explain the details of what is often a spontaneous and disorganised process.

A psychiatrist once told me that I over-intellectualised everything.  I snorted at him at the time. But the Case of the Missing Kalliope suggests that he was actually right. 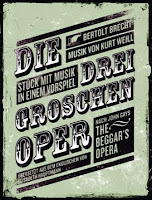 I saw a spine-tingling show in a theatre, the first for many moons. In my experience you have to sit through nine evenings of tedium and mediocrity for every one of such enchantment. But that one in ten just about makes it worth it.

The tingly vertebrae were caused by the outstanding skills of a joint Russian and German cast at Weimar National Theatre in the Threepenny Opera (Dreigroschenoper) by Kurt Weill, Bertolt Brecht and (please excuse me while I tastelessly add the name of the non-Y-Chromosome bearer) ELIZABETH HAUPTMANN. Bert preferred not to make it too public that she had co-written the libretto as well as providing for all three of them the German translation of John Gay’s 18th-century Beggar’s Opera. I wonder if it was Hauptmann who added phrases from Plautus’ comedy Trinummus (“Three-Penny” Comedy) and came up with the German title accordingly.

Actors in Central and Eastern Europe are still trained to communicate with their voices and bodies in ways that make their equivalents further west look amateurish: they are gymnasts, dancers, mime artists, athletes, ventriloquists, and the best of them can actually forget their own egos and career trajectories long enough to deliver a seamless ensemble piece. As the crooks, beggars, and whores of Old London, this cast worked their socks off.

The Entfremdung idea in epic theatre, of course, is that you don’t get emotionally involved. You are supposed to be intellectually edified and become a critic of capitalism. I obediently spent the entire evening trying hard not to cry when Polly Peachum found out about rival Lucy’s (fake) pregnancy, and Mac the Knife got sentenced to death. (Mackie  Messer doesn’t sound as scarey, of course). But it was touch-and-go during Pirate Jenny and Mac’s nostalgic tango as they remembered love in the bordello.

After the show, one of the polite  local beggars asked me if I had 50 Pfennigs, or Groschen, or what are now called cents, since he was hungry. Acutely conscious that I had just spent more than one hundred times that amount on three hours in a theatre Criticising Capitalism, I gave him a €5 note. He looked mortifed, fumbled in his pockets and actually apologised because he had insufficient funds to give me €4.50 change (which I had not asked for and did not want).  I do not know whether it was the Alienation Effect or the reality of street life in 2013 which was responsible, but I did not get much sleep that night.
Posted by Edith Hall at 16:44 No comments: