The Pimp and the Cash-Strapped Students

One of my undergraduate friends spent a day a week as a sex worker in order to maintain herself while she studied.  As she was not British, she was not awarded  the maintenance grant that the state bestowed on its undergraduates back in 1980 so that they could spend time reading books without incurring humiliation or danger.

Brandon Wade, the American founder of the fastest growing "Sugar Daddy website", used by thousands of young women attempting to pay their way through university (www.seekingarrangement.com/), says there is nothing demeaning about either deal:  a rich man buying sex with students isn't “very different from a rich husband or boyfriend giving money to a wife or girlfriend.”  Wade admits that he founded his company because it was hard for him to get laid without offering "presents" or money.

Wade is obviously very pleased indeed with the British government for abolishing state subsidy of fees in Higher Education. He has just made a major marketing push into these islands. But his unedifying business has also given me an insight into ancient social history. Perhaps it explains why all the famous ancient courtesans were so incredibly well educated. Was Pericles actually paying the fees for his odalisque Aspasia to attend the sophists’ lectures? Had Theodota persuaded Alcibiades to pay Socrates so that she could attend the famous dialogues? Was Rahab, the clever harlot of Jericho in the Book of Joshua, secretly saving up to study the Torah?

Just to prove how cool and "now" prostitution is, Wade  publishes League Tables showing how many female students he pimps at North American and UK universities:  more of what he calls his "Sugar Babies" (my stomach heaves) attend NYU than anywhere else; in the UK, the University of Kent has just been edged into second place by—of all places--Nottingham.

The city which gave us Robin Hood, the hero who stole from the rich to feed the poor, is now to find fame as the home of young women performing sexual acts on rich men in order to get the education which  in any civilised society would be theirs by right. Or perhaps this is not such a new development. Was Maid Marian dating Robin (or even secretly servicing the Sheriff of Nottingham) simply because she needed to fund her Masters in Forestry?
Posted by Edith Hall at 15:32 3 comments:

The Greek Scapegoat of Capitalism


The Greeks, we are told, need to be ‘taught a lesson’ for an abominable crime against the bankocratic (‘trapezocratic’) regime under which we now live. They have been very naughty indeed, what with over-spending on the Olympics and hubristically imagining that they deserve a standard of living comparable with northern Europeans. They need to apologise and take their punishment lying down.

The prospect of the expulsion of Greece from the Eurozone reminds me of the ancient ritual of the scapegoat. If a city was suffering from drought or famine, an individual—usually lower-class, poor, and ugly—was dressed in fancy clothes, given one decent meal, and then stoned out of the city.  The idea was to con the gods into thinking that the scapegoat was responsible for all the naughty behaviour which had caused the drought or famine in the first place.

The 11 million people living in Greece are clearly responsible for the entire global credit crisis of 2008, and must be expelled from the Euro-cosmos, of which they represent just 3%. Representatives of the remaining 97% (Austrians, Belgians, Cypriots, Estonians, Finns, French, Germans, Irish, Italians, Luxembourgians and Spaniards) could reinvent the ancient scapegoat ritual. After surrounding Greece in tugboats, they could throw stones onto the beaches, reciting stock market prices as they did so, in the hopes of fooling the wrathful gods of the Free Market--Wealth (Ploutos) and Poverty (Penia).

Long ago I was married into a Greek family.  My mother-in-law had nearly starved to death under the Nazi and then Axial occupations, as more than 300,000 actually did; her brother was shot dead, unarmed, protesting in the street; thousands of young Greeks were abducted into forced labour camps. The international dimension of the Greek economy was dealt a lethal blow with the systematic destruction of the historic trading houses run by the thoroughly assimilated Jews of Thessaloniki.

The Germans never did pay the reparations for the damage they inflicted when they plundered the economy through massive forced exports, and compelled the National Bank of Greece to loan them hundreds of millions of Reichsmarks (NB: interest-free). After the war, at the Paris Conference on Reparations, it was agreed that Germany should repay the Greeks sums which bankers estimate would be worth nearly two hundred billion Euros at today’s prices—that is, the equivalent of most of the emergency bailout money they have received.  But this never happened. When the peace treaty was finally signed in 1990, Germany officially escaped from the obligation to pay back anything at all.

The argument which was used by the USA against insisting the Germans paid reparations in the post-war period was that it might destabilise the country as it had in the 1920s and 1930s, and lead to another world war. Now I know that most people outside Greece couldn’t care less that inflicting extreme financial hardship might destabilise the tiny country and lead to a military junta like the vicious dictatorship so assiduously supported by the USA between 1967 and 1974. But they will most certainly care if Greece leaves the Eurozone, because confidence in other ‘weak’ member economies will be so shaken  that a pan-European financial meltdown will be inevitable.

The problem facing the Trapezocrats is that although the welfare of all of us requires that the Greeks get a helping hand, this conclusion undermines the fundamental free-market principle of non-intervention.  The gods of capitalism must be getting very nervous indeed.
Posted by Edith Hall at 12:29 1 comment:

The Politics of Boredom

One of the things that the poet Louis MacNeice found notable about the ancient Greeks was that, unlike many moderns, they ‘believed in youth and did not gloze the unpleasant / Consequences of age.’ The Greeks were right, and MacNeice was right. It feels sensually good to be young and beautiful like the athlete Heracles and his girlfriend Hebe, the divine  personification of youth. But there is nothing pleasant about sensing your physical powers deteriorate every day. What I personally most resent is that I can achieve only about 60 per cent in any 24 hours of what I could get through in my early thirties.

But recently I spent a whole week on my own for the first time in fifteen years.  I was deliriously happy: no cooking, dishes or laundry for ungrateful adolescents;  evening TV tuned to news analysis not teen soaps; total, dense, ear-caressing silence all day long.

I was so thrilled to be under-occupied and isolated that it got me thinking. When I was young, and hangovers only lasted three hours, I was frequently BORED and/or LONELY.  But with the sole exception of a mindnumbing Classics conference two years ago (I will kindly not specify which one), at which otherwise intelligent people managed to deliver epochally tedious papers on some of the most exciting poetry in world  history, I have not suffered a single moment of either boredom or loneliness since  1998. When I do find myself alone, with nothing in the diary, I now feel the purest joy. 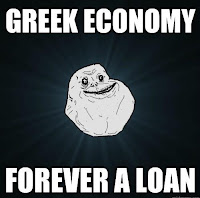 Boredom and loneliness will always threaten young people’s happiness, at least  before they have figured out what they want to do with their lives and whom they want to do it with. In 2012, these natural hazards of youth are however being criminally compounded by crippling debts and chronic joblessness (in Greece youth unemployment has hit 52 per cent).  So truckloads of  brilliant creativity, innovative ideas, fresh perspectives, energy and ability to take risks and bounce back, qualities which make our young people such a crucial asset, are being despicably squandered.

Let’s stop pretending that being young is fun--‘glozing the unpleasant / Consequences of youth’. Francois Hollande was so right to insist last week that he is not just the president of France but ‘the president of the youth of France,’ even if he is losing his hair and pushing sixty. Hollande also proposes to create subsidised jobs for young people in areas of high unemployment, 60,000 new teaching jobs, to tax the rich more, and  reduce the retirement  age. While we wait to see if he has the real intention or capability to act on any of this, let’s briefly enjoy the glimmer of hope on the Euro-horizon. I had begun to forget that politicians could even talk like that.
Posted by Edith Hall at 19:30 No comments:

My parents came from different social classes. I have an early memory of the argument between a member of each family over when to put milk into a cup of tea. The individual who lived in a council house said you poured milk into the bottom of the cup before adding the tea; the haut-bourgeois one insisted that you added the milk at the last minute.

As a result of this upbringing, until recently I thought that I was bilingual in class and cultural mores, at least in Britain. I prided myself on being able to handle complicated cutlery and discuss brands of handbag or breeds of horses, while feeling personally more at home in the co-op than the organic delicatessen.

But then it happened. A friend who lives in a genteel village, where the Horse Chestnuts (Aesculus hippocastanum) have sadly become diseased, asked me what the parish council should plant instead. Spotting a beautiful Sycamore through the window, I said brightly, ‘How about Sycamores?’ The shock on his face was palpable. ‘Oh NO!’ he said, grimacing as if I had suggested force-feeding his children Kentucky Fried Chicken.

Can someone please help me? It is not that I am unaware that horticulture and arboriculture are arenas of class conflict.  My posh parent told me that the Laburnum tree was a favourite of the nouveaux riches (because it is toxic or because it is ostentatious?) and that the Pampas Grass was only for the tiny garden yards of the working classes.

I had a hunch that the issue might be indigeneity. The Pampas Grass comes from the southern Americas, which in the mind of a middle-class Briton just might make it ‘vulgar’.  But the Horse Chestnut originally comes from the Balkans, where it was cultivated by the Ottomans. It was only introduced into western Europe in the sixteenth century.

Sycamore leaves, however, feature along with Oak, Hawthorn, Maple and Bryony on the Oxford shrine of the very English Saint Frideswide, which was built in 1259. Sycamore trees are mentioned by Geoffrey Chaucer, who was once a forester.

The Sycamore was almost certainly introduced into Britain by the Romans, who were great gardeners but also sensible enough to know that this tree produces very strong and flexible timber.  Please can someone explain its class profile before I betray my lack of refinement any further? Can it really be that Roman imports are still regarded as vulgar?
Posted by Edith Hall at 10:12 No comments: