Medea and the Gender Realignment of Georgia

I’ve been Tbilisi to lecture on the most famous female Georgian of all time, Medea—sorceress, murderess, and agent of the Justice of Zeus Oath-God when her morally invertebrate husband Jason breaks his marriage vows. An international conference run by the extraordinarily enterprising classicist Professor Irine Darchia explored the complex ways in which Medea has fired cultural imaginations across time and the planet.

On a steep learning curve, I discovered that Georgians get cross when people say their only famous native son has been Stalin, aka Ioseb Jughashvili. On the contrary, women authority figures are a Georgian tradition, far more so than Medea-obsessed classicists have realised.

So you thought that the most important saint in Georgia was obviously dragon-slaying George, also chosen as England’s national patron by Edward III in 1327? Forget it—the individual who brought Christianity to the Georgians was not George at all, but his cousin Saint Nina (aka Nino), ‘Equal to the Apostles, Enlightener of Georgia’.

Nino was trained in her faith by a wise woman called Nianfora, went to the Caucasus, was aided by a gardener’s wife called Anastasia, and converted the people there, starting with Sidonia, six other prominent Jewish women and Royal Consort Nana (previously a Venus-worshipper). Georgia should really be called Ninopolis. George never even visited.

And the most effective monarch of Georgia in history was King Tamara (there was no word for Queen) in the 12th-13th centuries. She was such a capable child that her father George III made her his joint ruler at the age of 12. She led the successful defence of her people from serial invasions, expanded their territory, banished her first husband for immorality, married a better one, had two fine children, and oversaw the ‘Golden Age’ of Georgian culture.

As a result, the country’s national epic, The Knight in the Panther's Skin, was composed in her lifetime. An allegorical embodiment of her, the exquisite Nestan-Darejan, is the inspiration of its courtly action.

Move over, George and Joseph: it is Nino, Nana, Sidonia and Tamara as well as the defiant Medea who are the real representatives of your country.
Posted by Edith Hall at 12:56 1 comment:

It has been Week of the Nomad. The new British Museum Scythians exhibition is revelatory. It reminded me of Tom Gunn’s immortal poem ‘Hedonism’:

After the Scythians, how advance
In the pursuit of happiness?
They went around in leather pants,
And every night smoked cannabis.

At the same time, Travellers have been encamped in two fields beside our home in Cambridgeshire. They have been polite and friendly. They are unobtrusive but have a laugh with me when our dog plays with theirs.

The prejudiced coverage in the local press has been shocking. So have the expressions of terror and outrage amongst my non-nomadic fellow villagers. Travellers have always faced harassment, and difficulty finding places to park caravans, but the drastic decrease in available Common Land over the last decades has made their situation much tougher. The pernicious Criminal Justice and Public Order Act 1994 eroded the duties of local councils to furnish adequate sites for them and expanded police powers of summary eviction.

Members of one Traveller family received sentences this week at Nottingham Crown Court for running a slavery racket in Lincolnshire. Their behaviour to the workers they abused  was appalling, and so was their defence claim that they were ‘only’ doing what other Travellers did all over the country.  But I could not believe the irresponsibility of Timothy Spencer QC when he said, on no evidence whatsoever, that he feared they were correct ‘that all Travellers had workers operating under similar conditions.’

There are at least 300,000 Travellers in Britain. As Bill Forrester of the National Association of Gypsy and Traveller Officers said in response to Spencer’s outburst, ‘the vast majority of them ‘are just as outraged by modern-day slavery as the vast majority of the non-Traveller communities.’ There are plenty of modern-day slaves exploited in Britain by people living in houses. 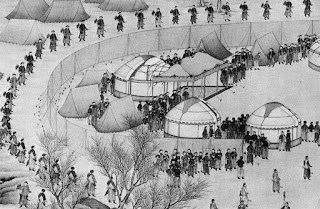 So why do Travellers of all origins—Roma, Irish, Eastern European—arouse such hostility? Ignorance of their way of life is one factor, but I believe another is unacknowledged envy. I suffer from no romantic illusions about Traveller lifestyles. Yet I do not think I am alone in feeling that the 60,000 years during which every Homo Sapiens wandered the planet in pursuit of food, eventually with portable tents and in company with herds of livestock and cooperative dogs, were in many ways preferable to the sedentary life of the modern city-dweller.

The ancient Greeks saw nomadic peoples of Scythia, Libya and Ethiopia as utopian—more egalitarian, more virtuous and more just—than the agriculturalists and bricklayers of the great ‘civilisations’ of Sumer, Egypt and Iran. I know that I often long in the morning to emerge from my tent to watch the sun rise over a different valley from yesterday. I get depressed if I have no travel lined up in my diary for a month or two. We all need to acknowledge our Inner Hunter-Gatherer-Itinerant-Pastoralist and stop fanning the flames of prejudice like Judge Spencer did this week.
Posted by Edith Hall at 12:40 No comments:

A Serious Response to Rees-Mogg's views on Abortion

The Etonian MP Jacob Rees-Mogg, who claims to have become a Tory at the age of five, and has burdened his own sixth child with the name ‘Sixtus’, told us this week that he is opposed to abortion. This means abortion at any point after conception and under all circumstances, including where a pregnancy is the result of rape.

The one position which is entirely inconsistent is to say that abortion is absolutely wrong ‘unless the woman was raped’. According to this view, child murder is fine if the woman did not want the sex. Such a view would clearly be motivated by a desire to control women’s sexual activity and punish them for having sex voluntarily.

But most Britons think abortion is not equivalent to the murder of a post-partum human, which means that other reasons for abortion may be valid. Under current UK law, there are several reasons why the two required doctors can ‘agree’ to ‘let’ a woman have an abortion in the first 24 weeks of pregnancy, and these do indeed rest on the premise that a woman’s mental and physical health is more important than the unborn potential human. Moreover, doctors may take financial and social factors into consideration.

The current law in the UK (excluding the antediluvian state of affairs in Northern Ireland) works well enough in practice. But it is surely wrong that abortion is still a crime unless signed off by those two doctors.  Along with the British Medical Association, I am convinced that it is a medical rather than a legal issue. We are currently in the situation where a woman who succeeds in taking an abortion pill without ‘permission’, however early in the pregnancy, is committing a crime for which, unbelievably, there is a maximum penalty of life imprisonment.

This needs to change. It would be a sign of a healthy democracy if all the journalists filling columns with responses to Sixtus’ dad could use those inches to discuss potential reforms to the Abortion Act 1967 instead.
Posted by Edith Hall at 16:32 2 comments: