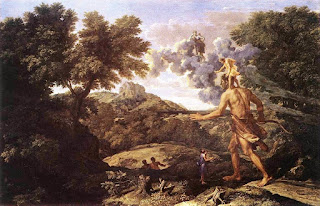 I’m writing up an article for a volume edited by my wonderful KCL colleague, Dr Ellen Adams, entitled The Forgotten Other: Disability Studies and the Classical Body. A myth hardly anyone has ever paid attention to, besides the French painter Nicolas Poussin, is my theme.


It tells a heart-warming story about the cooperation between three disabled ancient divinities: the blind Orion, the dwarf Cedalion, and the lame Hephaestus. Orion receives advice about the way to find and face the rising sun, and thus be healed, from Hephaestus on the island of Lemnos. The blinded giant is guided by Cedalion, tiny enough to perch easily on his shoulders. Diana, Orion’s erstwhile enemy, looks on impassively. 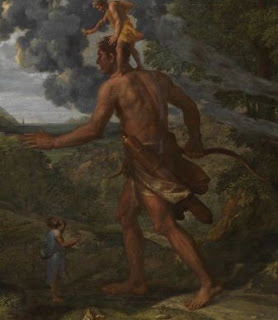 Poussin painted the superb landscape (now in the Metropolitan Museum in New York), for his Parisian patron Michel Passart, in 1658. He was then succumbing to the acute tremors—perhaps caused by Parkinson’s disease—that were cruelly to sabotage his ability to control his brush-strokes. I like to think that the emotional power of the picture partly stems from his identification with these physically challenged classical deities.
Poussin found the story in Natalis Comes’ 1567 compendium of mythology and in the ancient satirist Lucian, who described an ancient painting in his The Hall as follows: ‘Orion, who is blind, is carrying Cedalion. Cedalion is showing him the way to the sunlight. The rising sun is healing the blindness of Orion, and Hephaestus views the incident from Lemnos’.

The only other painter to have been drawn to this theme may have been George Frederic Watts, but I can find no trace of his 1895 ‘Orion’. Poussin’s painting has had many admirers. Joshua Reynolds once owned it, and the essayist William Hazlitt wrote a panegyric on it:

He stalks along, a giant upon earth, and reels and falters in his gait, as if just awakened out of sleep, or uncertain of his way;—you see his blindness, though his back is turned. Mists rise around him, and veil the sides of the green forests; earth is dank and fresh with dews, the 'gray dawn and the Pleiades before him dance,' and in the distance are seen the blue hills and sullen ocean. Nothing was ever more finely conceived or done.

Of these disabled gods, although I have written a study of Hephaestus’ lameness,* it is Cedalion I find most fascinating. His rare appearances in ancient art and literature usually depict him assisting Hephaestus in his smithy. He is probably the dwarf beneath Hephaestus’ donkey during drunken processions. The most beautiful example is a Pompeii mural, where he wears the freedman’s cap.

Lemnos was associated with certain medical practices and healing cults in antiquity, and the myth of the three friends who met there—disabled in different ways but mutually supporting one another—may reflect some aspect of the reality of the lives of disabled individuals in antiquity. But even if it is entirely fictional, it offers a picture unique in classical sources of the mutual affection and cooperation that is possible between people dealing with different physical disadvantages.

Physical disability was routinely mocked in the ancient world, but this story offers a fascinating exception. The Classics never cease to surprise.


*Happy to send a pdf to anyone who writes to my email consisting of my two names split by a full stop @kcl.ac.uk.
Posted by Edith Hall at 13:04