Regular readers of this blog or one-off readers of Greek Tragedy & the British Theatre  or A People’s History of Classics will know what a fan I am of the ancient British chieftain Caradog, or Caractacus. Head of the Catuvellauni tribe, which stretched from the Thames to the Wash and in whose territory I now live, he stood up against the Romans for eight whole years. The dastardly British Queen Cartimandua betrayed him to the Romans, but he made such a good speech in the Roman Forum that the Emperor Claudius spared him.

I was first put onto Caradog by Peter Bowles, a suave actor far more famous for domestic sitcoms set in suburbia, who wore improbable hair and make-up to impersonate him in the great TV adaptation of I Claudius in 1976. 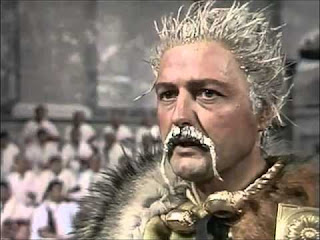 I became excited when I discovered that Welsh-speaking Edwardian schoolchildren enacted musicals about Caradog, and Lloyd-George found it useful propaganda to point out how brave their ancestors were when he was on his notorious WW1 Welsh recruitment drive. A version of this research is also published in the excellent Celts, Romans,Britons: Classical and Celtic Influence in the Construction of British Identities, ed. by Rhys and Francesca Kaminski-Jones, just published by OUP. I’m happy to send a pdf to anyone who emails me via my website. 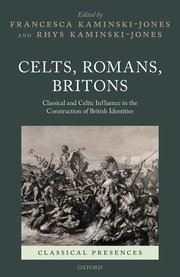 So I’m melancholy that I don’t have lying around in any of my numerous Offshore Bank Accounts even the starting price of £24,000 set by the Norwich auctioneers who will on November 15 be selling off a unique gold stater coin  depicting Caractacus (thanks to my dear friend Paul Cartledge for bringing this to my attention). 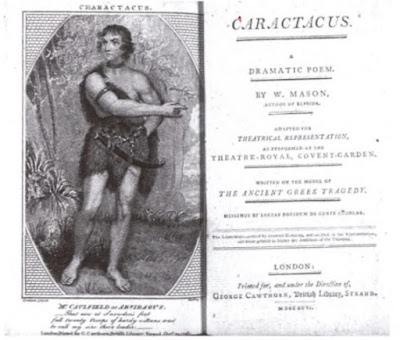 Found by a metal detectorist a year ago near Newbury, it was minted in Hampshire not long before Claudius sent four legions to subdue the ancestors. We can even stare into the remains of the face of a young man who may have fought for Caractacus. A skull of the right date was discovered in a nearby ditch last year as well.

The coin is important because it is gold rather than the usual silver for coins of this time and type, thus revealing the rich resources Caractacus seems to have had at his disposal. It suggests he thought he was an excellent horseman and liked arable farming.  The inscription CYNO on the reverse also probably shows that Caractacus really was the son of Cymbeline of Shakespeare fame, another early Briton of whom I am fond, as an earlier blog explored. At the end of his play Cymbeline drops his crazy jingoistic former allies and makes great friends with Rome. He would definitely have voted against Brexit. 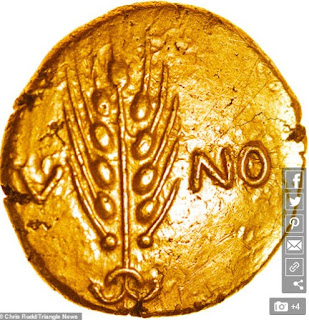 So I’d be sad if the coin was bought by the kind of tub-thumping nationalist who fetishizes ancestral ‘heroes’. If there weren’t far more pressing financial issues blighting the poor of the nation currently, I’d even have suggested a crowdsourced funding campaign to buy it and donate it to a Catuvellaunian museum. 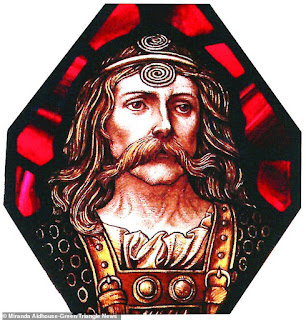