ALBANIA: Why You Need to Visit NOW

Over the last week I fulfilled an ambition I conceived as a Cold War teenager, locating places crucial to classical literature that that lay  behind the Iron Curtain. And the curtain separating isolationist Albania was the most impenetrable. By the time I arrived at university, the dictator Enver Hoxha had fallen out not only with Yugoslavia, but with the USSR and China too.

Until the 1990s I believed I’d never swim in the Adriatic by the towns of Northern Epirus, inhabited by Illyrians whose war cry terrified the best-trained Greek hoplite.  I thought I'd never visit the city of Epidamnus, from which the northernmost Greek sailors rowed at the Battle of Salamis. But now I've seen them and swum there, accompanied by my historian daughter Sarah. We were phenomenally fortunate in our guide Jenka Curri, driver Vinny (here on the Via Egnatia, which linked the Adriatic to Byzantium) and tour companion, and recommend their company Balkan Insight with the utmost enthusiasm.

Buthrotum/Butrint is breathtaking, fed by rich rivers flowing through verdant valleys to a turquoise lake that meets the sea.  Cicero’s loaded friend Atticus lived on a great estate here, than which Cicero wrote in 56 BCE, ‘nothing could be quieter or fresher or prettier’. Here Augustus settled the veterans of Actium so  Virgil knew he had to laud Buthrotum in his Aeneid. Rome’s future relations with not only Epirus but all Greece are defined forever by the friendly meeting between Aeneas and two other Trojan refugees, Helenus and Andromache.

I read this part of Book III for ‘O’-Level Latin in 1976, and remember my frustration that my teacher could not even find  Buthrotum on a map. Last week, at last, I found a shady spot beside the temples of the forum, where I imagine Andromache making her sacrifices to Hector’s shade before loading Aeneas' son with gifts because he reminds her of her dead child Astyanax, and Helenus' prophetic description of the future dangers facing the Trojan wanderers.

Apollonia was an imposing hillside city, built by Corinthians in the seventh century BCE, where Romans came to study philosophy and rhetoric (a stunning bust of Demosthenes has been found). Octavian received the news of Julius Caesar’s assassination here in March 44 BCE. The museum is packed with treasures including gorgeous Amazons and a comic actor chatting up Dionysus.

Dyrrrachium/Durres, known to the Greeks as Epidamnus, site of one of the most important battles between Caesar and Pompey, boasts an amphitheatre in the ruins of which early Christians built a church ornamented with stunning mosaics. I had always wanted to visit the city where Plautus’ Menaechmus Brothers is set, the play which underlies Shakespeare’s Comedy of Errors. The clever slave Messenio says that it houses ‘debauchees, big boozers, sycophants, perjurers and world-class fawning prostitutes’; it is certainly still full of Italian pleasure-seekers at it was in Plautus’ day.

My favourite finds in the Durres Museum were the gravestone of a tailor called Lucius Domitius Sarcinator and an exquisite vase depicting a sacrifice to Dionysus, complete with a vase-painting of dancing satyrs within the frame vase-painting.

Albanians are friendly, funny (a specialism is dark humour about politics) and excellent cooks. They have fine indigenous wine and beer. Many of the seriously inexpensive restaurants are called ‘Antigone’, not after Sophocles’ tragic heroine but the wife of Pyrrhus, Plutarch's ‘last of the Greeks’, who so bravely opposed Roman imperialism. I am still buzzing with excitement with all that I have seen, and would urge you to consider an Albanian adventure at the  first opportunity. 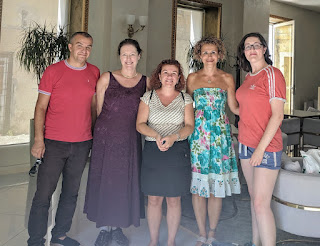 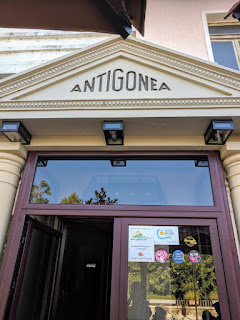