Boris Johnson, Tragedy and the Goat-Song

Of his multiple crimes against the electorate, truth and humanity, it’s hardly the most serious, but I resent that Boris Johnson has brought Classics into disrepute.

And it’s not as though he’s good at it. In October 2021, for example, he suggested to Bill Gates that in order to boost wind power production, ‘We must propitiate to [sic] the Aeolus, the god of wind … sacrifice a goat or something’. But the only fauna associated with Aeolus in antiquity were horses, bulls and kingfishers.

Johnson’s goat sacrifice reference was a Freudian slip: he knows his actions as PM all end up in tragedy. For ‘tragedy’ is the English transliteration of the ancient Greek tragōidia, from ‘he-goat’ (tragos) and ‘song’ (ōidē).

But why on earth should the most miserable and earnest genre of literature should be named after an animal whose bleats are inherently comical? The funniest thing on the Internet is the ‘screaming goat’ remix of Taylor Swift’s Trouble. Playwright Edward Albee saw the absurdity of tragedy's etymology in his hilarious The Goat, where a household is destroyed by a husband’s infatuation with a she-goat. 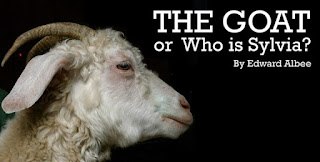 The week’s news has indeed been tragicomic, and Charlotte Higgins insightfully asks in the Guardian why, at a dark time, we seem to be in retreat from tragedy. So in honour of my first lecture course in my lovely new job at Durham University, Comedy & Tragedy, I’m lowering the tone further by a review of the explanations which have been given for tragedy=goat-song.

Dionysus, god of tragedy, appears in early Greek art and literature in association with hares, bulls, tigers, panthers, donkeys, snakes, dolphins and on occasion goats, but (with an extremely rare exception below) not goat sacrifice. Scholars ancient and modern, nothing daunted, have however proposed, rather desperately:

1] That the prize for winning the tragedy competition was originally a goat. (There is no evidence for this whatsoever).

2] Tragedy may have grown out of satyr drama, and satyrs sometimes have goatlike features or appear on vases shaped like goats’ heads. The trouble is, in the period when tragedy emerged, they were equine. So tragedy should be called hippedy. Or Hip-Hop. 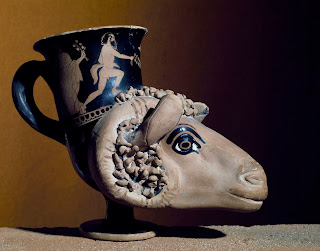 3] The trag- element in the name is an adaptation of another word, like trux (‘wine-sediment’), trachus (rough), or even something with a square (tetragonal) dance formation.

4] There are faint traces of a story about Dionysus in a black goatskin and the daughters of Eleuther, the king of the village of Eleutherai, traditional home of the cult of the theatrical Dionysus. (The traces are very slight and very late).

5] (Current consensus): Tragedy grew out of songs sung at goat sacrifices. The evidence is a single line in Euripides’ Bacchae where the chorus sing that the celebrant of Dionysus ‘hunts the blood of a fresh-slain billy-goat, an edible-raw-meat delight’. The trouble here is (i) that the Bacchae were, to their original audience, disgusting man-devouring barbarians who lived at least 800 years before them, and (ii) that goats were sacrificed to practically every Olympian god, especially Artemis and Apollo. As sacrificial animal, the goat is not at all distinctively Dionysiac.

Since the theatregoing ancient Greeks were as mystified by the etymology as we are, by the 4th century BCE (well after all our surviving tragedies) a vase-painter in the theatre-mad Greek-speaking Puglian part of south Italy painted this exquisite vase portraying, I think for the first time in ancient Greek art, a full-on goat sacrifice for a small statue of Dionysus (although the tablecloth sports a bull), complete with knife, a flaming altar and an attendant female with interesting items of bakery on a ritual tray. 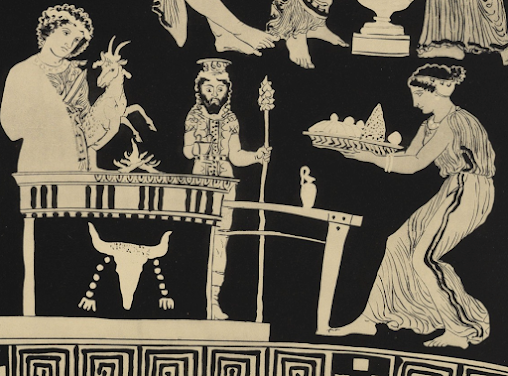 I love this picture, but fear that it is a fantasy invented to explain the origins of tragedy. Johnson’s Classics may be ropey, but perhaps it was from such ancient fantasists that he learned his total disregard for documentable truth. He may also be about to sing, instead of his swan-song, his last goat-song as (goatlike, priapic) PM. 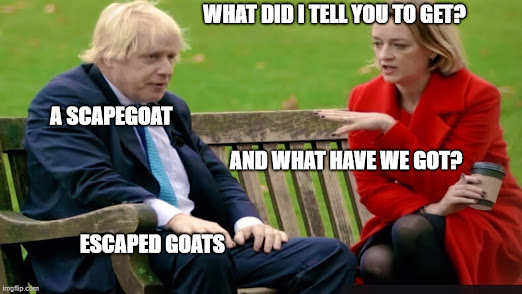