Two weeks ago I gave a speech in the great hall of the National and Capodistrian University of Athens, a spectacular neoclassical building. I used the occasion to explore a question which has bugged me since my first visit to Greece, when I was nineteen—why, on the  famous mural in the porch, was Aristotle painted waving a knife at a goose? In no other picture of his Lyceum, for example the mural of similar date by Gustav Adolph Spangenberg, in the University of Halle, is a goose part of the narrative.

Geese were certainly important in ancient Greece. They were farmed, domesticated as pets, and associated with heroines and she-gods: Penelope, Aphrodite, Athena, Kore/Persephone, Artemis/Hecate, Nemesis and later Isis. They are involved in another ancient mystery tale, the Goose Plot in Greek comedy. Two vases show an otherwise unknown play or plays in which a goose figured prominently—one alive (in Boston), one dead (in New York).

One possibility is that the mural designer, Carl Rahl, knew how important medicine was to Aristotle’s philosophy. Aristotle’s father Nicomachus had been a doctor, and doctors and medical analogies abound in all his works. Goose fat and other goose products were ubiquitous in ancient Greek medical preparations, and mentioned often in the texts of Hippocrates. Rahl will have been aware that Medicine was one of the original four faculties of this university.

Yet geese, unusually intelligent birds, do have weird connections with ancient philosophy. Aristotle’s Cypriot disciple Clearchus (who also happens to feature on the mural) wrote a book about sexual pathology called Erotica. It mentioned a goose who was infatuated with a boy (fr. 27). Aristotle’s friend Theophrastus’ On Eros also mentions a goose infatuated with a beautiful boy called Amphilochus. But sadly I don’t think the mural suggests that Aristotle, angry with his followers for their obsession with goose-human relationships, killed a goose in revenge.

More promising is what Pliny Senior writes about such love affairs. A beautiful youth from a town in north-western Peloponnese attracted a goose's passion, as did a young woman named Glauke who was harpist to King Ptolemy.  Pliny remarks, ‘one might almost be tempted to think that these creatures have an appreciation of wisdom (sapientia): for it is said, that one of them was the constant companion of the philosopher, Lacydes, and would never leave him, either in public or when at the bath, by night or by day.’

Another version of the story, by Aelian, adds that Lacydes was a philosopher of the Peripatetic school—that is, an Aristotelian. The sapient goose was devoted to its keeper: when Lacydes went for a walk, it went too; when he sat down, it would remain still and would not leave him for a moment. And when it died Lacydes gave it an expensive funeral as if it were a family member.

But I suspect that the true explanation is that Carl Rahl believed that Aristotle had dissected a goose. In the History of Animals, a goose appears in Aristotle’s discussion of male reproductive anatomy in animals which have blood.  Because he says here that the goose’s reproductive organ is difficult to see except straight after copulation, most scholars infer that a goose was one of the numerous different organisms he dissected. This seems even more likely since in Generation of Animals he claims that no bird has a penis. He has discovered it in the goose by careful laboratory observation.

This goose, however, is just one in a list which includes fish, snakes, ring-doves, partridges, lizards, turtles, tortoises, dolphins, elephants, hedgehogs, and pigs. Theoretically, at least, we could have had any of these portrayed on the mural. And this is where Rahl's tastes came in. I think he chose a goose from that list because, like all European painters then, he had been trained in the Dutch ‘Still Life’ tradition and liked painting the feathered wings of dead game birds. It is a shame, though. A hedgehog, pig, or elephant would have made the mural far more fun. 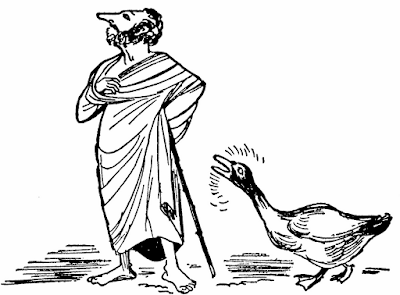