The GMC says there are nearly four thousand doctors trained in Greece working for the National Health Service. This is far more than from any other country in Europe except Ireland.

An affable and highly skilled Greek doctor from Thessaloniki recently conducted what could have been an unpleasant and frightening procedure on me with the utmost tact and efficiency. My mistake was to tell him I spoke some Greek, which meant that he asked me informed questions about archaeology.  I was in no position to answer these sensibly. I had been sedated and had a camera on a hosepipe up my rear.

What interested him was the information that Greek doctors had been practising in Britain two millennia ago. Inscriptions honouring the healing god Asclepius/Aesculapius in Greek rather than Latin have been found in several places in the north of England, including Lanchester near Durham and Maryport in Cumbria.

At Chester, near what is now the telephone exchange, a doctor named Hermogenes once dedicated a votive offering in well-shaped Greek lettering of the early 2nd century AD. It read ‘Hermogenes the physician (iatros) has set up this altar to the all-powerful preservers (sōtersin hupermenēsin)’, almost certainly meaning Aesculapius and his companion goddess Hygieia (Health).

Perhaps Hermogenes was official doctor to the 20th Roman legion, who built and resided in the camp at Chester.  But it so happens that the doctor who looked after the dying Emperor Hadrian was named Hermogenes. This famous Greek had good credentials, since he seems to have been trained in the medical school of the peerless anatomist Erasistratos. Erasistratos, who came from Kos, the island where Hippocrates himself had practised, was Aristotle’s grandson, no less.

Cassius Dio 69.22 tells us that when Hadrian was dying slowly from dropsy, Hermogenes helpfully pointed out to him the place on his chest which, if an attendant struck a blow, would allow him to die fast and painlessly (in the event Hadrian could persuade nobody to help him out, and ended up eating and drinking himself to extinction). 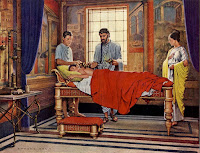 My own friendly Greek doctor, in the best tradition of Greek hospitality, ended up inviting me and my whole family to a meal any August we found ourselves in northern Greece. The embarrassing nature of the procedure I underwent means I am unlikely ever to accept the invitation. But if he happens to read this blog, I would like to record my gratitude. I hope there will still be such excellent Greek doctors practising in Britain in another two thousand years’ time.
Posted by Edith Hall at 10:09