Open Classics on Pots and Online

An exciting week for my project Classics and Class (nominated last term as the only Arts & Humanities research venture for the King’s College ‘project of the year’ prize). Co-author Henry Stead and I heard that the anonymous peer reviews Routledge received for our Big Book proposal, Classics and Class in Britain, were enthusiastic.

Even better, Routledge have accepted it under their Gold Open Access scheme. Once published (winter 2017/18), it will be available both in book form and completely free of charge, in its entirety, online—as is only appropriate for a study of the historic exclusion of most Britons from elite culture, and how they succeeded in getting access to the Greeks and Romans anyway.


Then I went north-west with esteemed colleague Dr Alexia Petsalis-Diomidis to the capital of the British ceramic industry, Stoke-on-Trent. Many vases and figurines produced there from the late 18th century onwards copied or adapted Greek and Roman artworks. Although some skilled painters and modellers were middle-class, the design classes at Mechanics' Institutes and, later, local art schools created jobs for children, of any class, with a flair for drawing. One was the 13-year-old Eliza Smallwood, whose apprenticeship contract with Minton's factory (shown below) was drawn up in 1878. And the tens of thousands of workers employed in the 150+ factories operating in the 19th century must have been well informed about classical gods and heroes..

In 1839 Charles Shaw, the seven-year-old son of a pottery painter, began working fourteen-hour days. His 1903 memoir When I was a Child, by ‘An Old Potter’ contains horrifying descriptions of the hunger, brutality, dangerous conditions and degradation suffered by the work force in the Potteries, as well as first-hand accounts of the Chartist riots. 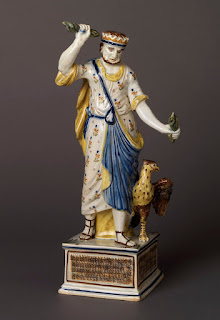 But he picked up information about mythology, read Charles Rollin's Ancient History at Sunday school, learned Greek, and became a Methodist minister. The classical figures produced by the companies for whom he worked lingered in his imagination. He described a ruthless local magistrate as one who ‘ruled as the Jove of the pottery district.’ The first Jove (aka Zeus/Jupiter) on which Charles will ever have laid eyes was probably this angry, thunderbolt-wielding figurine, produced by his first employer, Enoch Wood & Sons.

My pulse raced when we were shown the Firing Records from the 1790s by Gaye Blake Roberts, Wedgwood Museum Curator. The labourers who put the ceramics in the ovens—hot, backbreaking and dangerous work—used to draw the pots and figures in miniature in the margins of their often mis-spelt inventories. I can’t wait to write the ‘Potters’ chapter in the Big Book now. 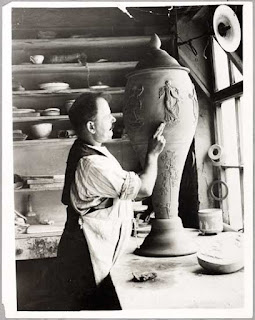