An Odyssey without the Darkness

Happy World Theatre Day, celebrated on March 27, which this year coincides with Western Easter.  At this time of year, when the sailing season started, the ancient Athenians celebrated the BCE equivalent—the international festival of Dionysus, complete with bull and piglet sacrifices, on the south side of the Acropolis. 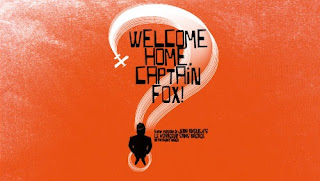 I marked it by cheering on my friend Sian Thomas, one of the funniest and most skilled actors around, in Welcome Home, Captain Fox, a hilarious new version of Jean Anouilh's 1937 Le Voyageur sans bagage / Traveller without Luggage at the Donmar Warehouse.

Anouilh was fascinated by Greek literature. Besides his world-famous Antigone, his plays include a Medea, an Oedipus and a Eurydice. Traveller without Luggage owes much to the Odyssey (even the key recognition token is a scar) and to the mistaken identity plot-type which Sophocles realised so darkly in Oedipus.

Anouilh’s play explores the Odyssean theme of the late-returning soldier whose identity is in question and whose own accounts of his past are unreliable. Homer gives Odysseus and his alternative persona as the Cretan beggar many different—and conflicting—memories. Can we really believe him when he says he has visited the Underworld?  Could he actually, as his beggar-self reports, have been kidnapped by pirates and enslaved?

The 'returning mariner’s tale' is primordial. It goes back many centuries before Homer to an Egyptian Middle Kingdom prose story called The Shipwrecked Sailor (c. 2050 BCE). But Anouilh was also inspired by the real-life tragedy of a traumatised and amnesiac French soldier sent back from German captivity and found wandering in Lyon in 1918. He thought his name was something like ‘Anthelme Mangin’: I first learned about him from Jean-Yves Le Naour's fine book The Living Unknown Soldier in 2005.

'Mangin' suffered much, moving between asylums. He died in one, hungry and forgotten, in 1942. But the bereaved of France were suffering too: no fewer than 300,000 of their men had disappeared without trace from the trenches. When ‘Mangin’s' photograph was published, hundreds claimed to be his wife or mother, desperate to have ‘their’ beloved lost man returned to them.

Anouilh’s play has been updated by Anthony Weigh, who transplants it to the Long Island bourgeoisie in 1959 and makes it both more ‘feelgood’ and far less profound. Not that I have anything against high comedy, and the performances, especially Thomas’s ghastly Übersnob Mrs Fox, are outstanding. The stellar reviews are richly deserved.

But both the Odyssey and Anouilh’s original poignantly convey the psychological agony as well as the absurd comedy involved in delayed postwar reunions and compromised memories. My quest for a London theatre with anything really serious to say goes on.
Posted by Edith Hall at 06:30