1. Cristina Odone, Telegraph blogger, no stranger to affluence, sits with her ten-year-old daughter Izzy and her stepson Johnny in a luxurious home and skypes with a reactionary 71-year-old Latin tutor from Ireland. He has recently published a traditional grammar textbook which Odone seems keen to promote.


2. A group of largely under-privileged children age 9-11 are introduced by the inspirational Bob Lister (teacher trainer) and Liz Lloyd (teacher) to the Iliad Project at the William Ford Junior School in Dagenham. They listen, spellbound, as they collectively harness the power of storytelling, perform scenes from the epic and demonstrably improve their  listening and speaking skills to the magical rhythms of the ancient poem.


QUESTION: Would you rather be in Odone’s sitting room or that hushed state school in Essex? I have no doubts myself, having been reduced to tears by a video of the Iliad project shown at a conference run by Classics in Communities, an initiative devoted to bringing the Greeks and Romans to children across wider social strata, and hosted with delicious sandwiches at Oxford University last Saturday.


I would be able better to tolerate Odone’s domestic narcissism, even her ignorance about  what is at stake in pedagogy, if she didn’t launch such moronic attacks on teacher training colleges: “Don’t go near them!” we are told, approvingly, her Irishman “thundered over Skype”, since “they teach only the worst habits and will psychologically scar you forever.”


Oh dear. I have seen personally the inspirational effect of committed and thoughtful teaching of great ancient literature to disadvantaged children. This requires skills Odone seems unable to bear contemplating. Her intervention is so disheartening for the tiny handful of people still helping others to learn how best to energise such children through Classics. There are only two institutions left in Britain where you can qualify to teach Classics in State Schools, Cambridge and King's College London.

More particularly, Odone is attacking the extraordinary band of teacher trainers at these two institutions now running ‘crash’ courses to other teachers on how to get Latin or Classical Civilisation up and running outside the private sector in Britain. These teacher-trainers are heroes. With grants from e.g. the Roman Society, they are training (sorry if that is a dirty word, Cristina) even teachers inexperienced in Classics to introduce ancient thought and language to ALL the nation’s children. Not just to Izzy and Johnny. 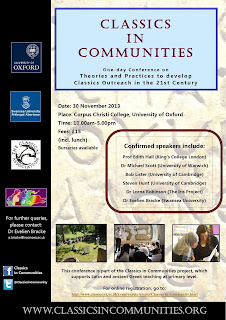 So sneer away, Cristina, about how delightfully one eccentric communicates with your children. Most of the children reached by ‘Classics in Communities’ are not given private skype coaching by Latin teachers when (or if) they finish their official homework. Some have no computer, broadband, or mother. It is one thing to enjoy class privilege. It is quite another to gloat about in print, publicly.