So I handed in a letter of resignation from Royal Holloway the day before yesterday, having finally signed a contract on Wednesday at King’s College London.

King’s had approached me less than 24 hours after RHUL management dropped its crazy bombshell on the department of Classics & Philosophy way back on June 28th.  At some point between June and last week I reached the tipping-point which made it psychologically impossible to continue working at RHUL.
Was it the day when the management’s spokeswoman started denigrating our departmental research to a readership of thousands on Facebook?
Was it October 5th, when my colleagues and I heard with astonishment the identity of the people who felt it was incumbent upon them to defend management’s proposals to our Councillors?
Or was it the day when I was told there was no money at RHUL to provide me with a computer when mine packed up (actually, I have since much enjoyed using the postgraduate computer room!)
Tipping-points are fascinating. The metaphor comes from the scales, an important symbol for decision-making in Greek literature. When Zeus decides who should die in a battle, he weighs the souls of the warriors in counter-posed scale pans until one outweighs the other. 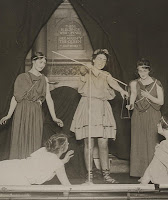 In Aristophanes’ Frogs, the drama of Aeschylus is weighed against the drama of Euripides to decide which poet could save the Athenians from crisis. But it is when Dionysus reaches his own internal tipping-point—a gut reaction—that Aeschylus is actually chosen.
In another Aristophanic comedy, Clouds, the hero Strepsiades accepts all the rules of the university run by the conman of the education industry, a caricatured Socrates, who can teach you how to Get Rich Quick. Strepsiades accepts that Right is Wrong and that the goal of intellectual work is to get hold of your opponent's money, rather than to pursue truth and enlightenment. But Strepsiades does reach his own tipping-point and rediscovers his moral centre when his son argues that it is ethical to beat up your own ageing parents.
Some of my fantastic students and campaign workers staged a brilliant adaptation of Clouds as the sun went down over the south quadrangle on Friday.

It was written by David Bullen and directed by Helen Eastman. It attracted a huge impromptu audience. The young are fed up with being pushed around by baby boomers  who have bagged all the best jobs and houses and are now wrecking their universities.
The comfortable generation should take care that their children don’t suddenly refuse to accept debt, poverty and unemployment as their inevitable lot. They just might reach a tipping-point.
Posted by Edith Hall at 13:49