On Being UnStoic in Zeno's Cypriot Birthplace

Regular readers will know that I am neither temperamentally nor philosophically impressed by Stoicism. But I like to visit the home-towns of ancient Greek intellectuals, and so rounded up six wonderful days in Greece and Cyprus celebrating freedom by having a deeply unStoic time in Kition, Cyprus, where Zeno the great Stoic was born at some distance from Aphrodite's birthplace in the west of the island, because obviously a Stoic disapproves of this divinity.

The day started with not going studiously round the ruins of ancient Kition, but waving at them from my wonderful hostess’ Magdalena Zira’s car (she is a former PhD student of mine and a theatre director). It is impossible not to laugh in this vehicle because an imperious lady living in the dashboard constantly gives orders in Japanese, and nobody on Cyprus knows how to shut her up.

First I went to swim on Larnaca beach, not to improve my capacity for self-control and resilience, but to enjoy gratuitous physical ecstasy. Then we went to a world-famous taverna run by Mr Militzis surrounded by fragrant flowers and drank his homemade wine BEFORE NOON. We ate far more than any Stoic would in a week because it was delicious. Moreover, British Airways, with whom we were returning later in the day, no longer think economy passengers have any physical requirements even on 5-hour flights. 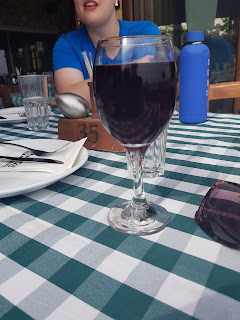 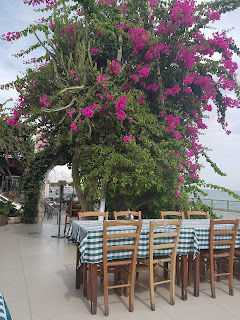 Prior to being unStoic in Kition, where I enjoyed staying in a flat where the Communist Party of Cyprus used to have unofficial meetings, I fulfilled a lifetime ambition by visiting Paphos. Aphrodite's town, as my travelling companion daughter Sarah Poynder discovered to her joy, contains even more (deeply unStoic, pleasure-addicted) cats than mosaics or statues of Aphrodite.

And we had arrived from the Peloponnese where I had talked, within 48 hours, to audiences at the inaugural Benaki festival, on both Homer and ancient democracy. Hanging out with my classical besties Nat Haynes and Bettany Hughes was a delight.

On Saturday night there was a competition chaired by Nat in a splendid restaurant between spokespersons for The Greatest Greek. I am pleased to say that Aristophanes, advocated by me, saw off Judith Herrin’s Empress Eirene, Yannis Palaiologos’ Venizelos, Bettany’s Helen of Sparta/Troy and Tom Holland’s Alexander the Great. I simply asked whether the audience, if stranded together on a desert island, would rather have icons, unlimited sex, unlimited political ambition/power or laughter plus freedom of speech. I am glad to say that they voted the right way. And nobody nominated Zeno. 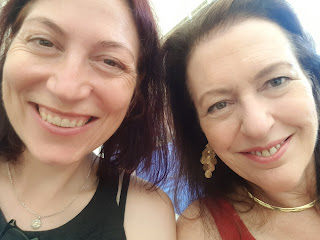 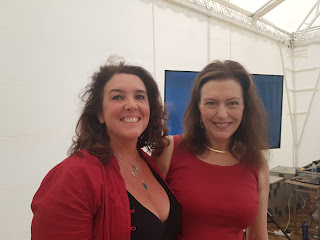