Jacques-Louis David & the Human Tragedy of the Iliad

Jacques-Louis David must long ago have won the distinction of having his paintings on the cover of more Classics books than any other artist: think ‘The Death of Socrates’ (1787), ‘The Intervention of the Sabine Women’ (1799) and ‘Leonidas at Thermopylae’ (completed 1814) alone.

But my favourite is his early 'Funeral of Patroclus' (1778), because it shows what he included, and what he omitted, from the source text in the Iliad book 23 (part of the text is translated below). The painting went missing until 1972, when the National Gallery of Ireland acquired it; everyone was surprised how much David’s concept had changed between the final painting and his preparatory sketch in the Louvre that had never disappeared.

David’s changes focussed the viewer’s attention far more intensely on the human emotional drama—the three spot-lit male cadavers and the faces of the captive women, especially Briseis who will deliver her own lament for Patroclus shortly. He left out all the dead bodies of animals which Homer has Achilles pile on the pyre, but by the time he finalised the painting he had taken the more momentous step of eliminating the gods.

In the sketch he had followed Homer in portraying gods intervening to protect Hector’s corpse, which Achilles had wanted to be devoured by dogs: Aphrodite hovers above the corpse, anointing it, and the chariot of Apollo arrives from the left, drawing a dark cloud to shield the dead flesh from the sun.

David may have been attracted to the theme by the subject set for the Prix de Rome back in 1769, ‘Achilles, after dragging Hector’s corpse, places it at the foot of the bier where Patroclus’ corpse is lying’. But he did not complete the painting until nine years later, apparently wrestling with its complexity.

The funeral of Patroclus brings out the very worst in Achilles, who breaks every rule of ‘civilised’ warfare in sacrificing those poor Trojan men on Patroclus’ pyre. The Homeric narrator hardly ever passes moral judgement on actions in the poem, but here he makes an exception: Achilles ‘conceived an evil plan in his mind.’ ‘Great-souled’ Achilles, David says with great clarity, has far more victims than persecutors. 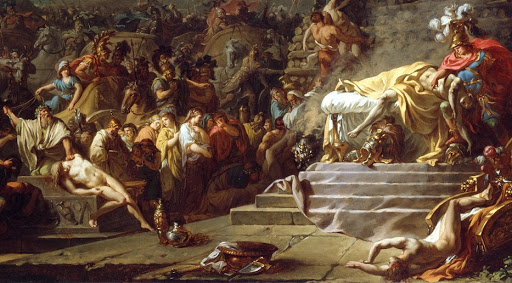 Patroclus' loved ones ‘heaped up the wood and made a pyre a hundred feet in both directions, and they put the corpse on the top of the pyre, broken-hearted. In front of the pyre they skinned and dressed many fine sheep and horned cattle of rolling gait. Great-hearted Achilles took the fat from all of them and covered the corpse with it from head to toe, and piled up the flayed bodies around it. And he leaned two-handled jars of honey and oil against the bier.  Swiftly, groaning intensely, he threw on the pyre four horses with arching necks. Patroclus had nine dogs that ate beneath his table, and Achilles cut the throats of two to place on the pyre. And he slaughtered with the bronze twelve valiant sons of the great-hearted Trojans, conceiving an evil plan in his mind. And then he set the pyre alight with the iron might of fire.