Today marks a curious anniversary. It was on 21st July 1922, exactly ninety years ago, that Djemal Pasha, known as a-Saffah (“The Butcher”), the Damascus-based Ottoman governor of Syria, was assassinated by an Armenian. Djemal had it coming. He had played a leading role in the genocide of Armenians, and brutally liquidated many dissident Christians, Shi’a Muslims and Lebanese.

On 21st July 2012, Djemal’s spiritual descendant Bashar al-Assad, who is said still to be lurking in Damascus, must be concerned that the violent deaths this week of four of his closest “senior management team” herald his own.
Al-Assad, who trained as an ophthalmologist, would presumably take a professional interest in my favourite despot of Damascus, “Antigonus the One-Eyed”.  This Macedonian Cyclops was Alexander the Great’s toughest general and very nearly succeeded in uniting the Macedonian empire during the wars of the Successors.

He was enormously tall and scarred as well as monocular (much more scarey than Ian Beattie portrayed him in Oliver Stone's 2004 movie). His mistake was to have the honesty to adopt the title of King (Basileus) when the other Successors were creepily saying that they only wanted to rule vicariously in the deceased Alexander’s name. This frank acknowledgement of his own power meant that Antigonus had to keep on waging war, and he died in battle IN HIS SEVENTIES!

Nor did the far-famed Khālid ibn al-Walīd, Companion of Muhammad, conqueror of Damascus in 634, get the death he wanted. Pockmarked, big-bearded, and a champion wrestler, he only bathed in alcohol (although insisting to other Muslims that he never drank it). He remained undefeated in more than a hundred mighty battles. But his sad last words regretted his tame demise: “I've fought in so many battles seeking martyrdom that there is no spot in my body left without a scar or a wound made by a spear or sword. And yet here I am, dying on my own bed like an old camel.”

Until al-Assad lost the plot, however, the prize for most bloodthirsty ruler of Damascus should perhaps have gone to “Timur the Lame” (aka Tamberlaine the Great).  He enslaved half the population, deported the skilled artisans to Samarkand, and murdered all the rest, piling their heads up in a field in the north-east of Damascus. The name of the place is still “Tower of Heads” (Burj al ru'us). Christopher Marlowe imagined what this Turkic megalomaniac looked like when annoyed:

Upon his brows was portrayed ugly death,
And in his eyes the fury of his heart,
That shine as comets, menacing revenge.

But Tamberlaine was cheated of a glorious exit from this life, freezing to death on a campaign for the Emperor of China which he had rashly undertaken in winter. 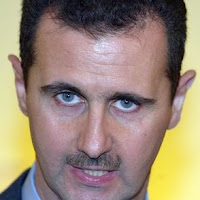 The current Despot of Damascus also sucks up to China. But given the climate of Syria he is unlikely to freeze to death. He is also increasingly unlikely to die anywhere as late as his seventies or at home in peaceful old age. My personal preference would be to have him made to account for the deaths of his people on trial in the International Criminal Court in the Hague. But assassination, the fate which befell his predecessor Djemal Pasha nine decades ago to the very day, can scarcely be off the cards.