Can the Left Appreciate Literature? A Reply to the Alt-Right of Classics

I’ve never been asked by a reputable journal to review such a bad book as Jeffrey Duban’s The Lesbian Lyre. Duban is an embittered person who left an apparently unsuccessful academic career for the law. He has published a volume ostensibly about Sappho so hefty that I plan to put it on the tea-towel when I am next squeezing water out of aubergines to make moussaka.

My first reaction to the proposal was to turn it down. The most painful aspect of the book is its (almost) unbelievably reactionary position on literature in general and ancient Greek poetry in particular. Duban is convinced that The Classics belong to a favoured few Very Intelligent People Like Himself and that nobody else has any right to study, translate or pollute them by any form of contact whatsoever. He particularly singles out for vilification ‘modern’ Greeks, ‘triumphalist feminists’, adult learners and ‘amateur’ classicists without expensive private educations. Yum.

My second response was to write a temperate review simply pointing out the (several) scholarly errors and (many) blind prejudices. But I felt as though I was using a nuclear warhead to destroy a hamster. 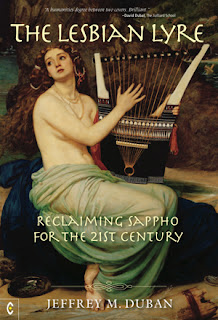 So in the end I decided to do something which I don’t usually approve of—use the space in the Times Literary Supplement to explore an issue which is of interest to me, and none at all, I suspect, to the writer of the book I was supposed to be reviewing.

The single merit of Duban’s work, it seem to me, is that he really, really, likes poetry and isn’t ashamed to say that some literature is really, really good. And it has always bothered me that the scholars most politically opposed to Dubanic elitism, those on the Left, not only in Classics but in all fields where artworks are discussed, are terrified of talking about beauty, sublimity, and artistic value.

Karl Marx and Friedrich Engels inconsiderately did not develop an aesthetic theory because they had more urgent things to do, like liberate the global working class. Subsequent Left critics have struggled to create an adequate theory of artistic excellence. Talking about literature in terms of its dialectical relationship with class and other socio-politico-economic categories (of which I’ve done a lot myself) is essential, but it’s not the whole story.

The only reason why it matters what literature says about society is that it can have an extraordinarily powerful psychological, emotional and therefore social effect. Pleasure, exaltation and excitement are political. We need to work on a Left-wing way of talking about the things which cause some art to make your hair stand on end, so we can really put the Dubans of this world in their place and not let the Devil get all the best literary-critical tunes.

The review is published behind a pay wall but you can download the pdf from the news column of my personal website here. Duban is known for his trenchant public statements: I don’t know whether I want him to write to the TLS to complain about it or not.
Posted by Edith Hall at 16:16