The saturnine new Greek Finance Minister, Yanis Varoufakis, has a face like a gangster and the worked-out body of a fitness fanatic. His rhetoric is scathing, cogent, and graphic. He quotes Dylan Thomas and Aeschylus. He calls the austerity measures imposed on Greece ‘fiscal waterboarding.’

Varoufakis wrote the dazzling 2011 polemic The Global Minotaur. It equates the beast in the lair of world capitalism, the American banking system, with the insatiable man/bull of Minoan Crete to whom human tributes—the sons and daughters of Athenians—were given to devour every year. The Minotaur myth may originally have arisen as an expression of the imperial subjection of Mycenaean Greek communities to the Bronze Age Cretan monarchy. But the new, global Minotaur of economic imperialism was born in the 1970s, when vast sums of capital began to be sent to Wall Street from all over the world, creating unsustainable contradictions which precipitated the 2008 crash.

This Minotaur is dying, says our latterday Theseus, himself born in Athens: the imminent combat between him and the global Minotaur's lackeys at the European Central Bank is set to be an exciting spectacle.

Varoufakis is not the first polemicist to equate an opponent with the Minotaur. Martin Luther was compared to the monster by his leading Roman Catholic foe. And the Victorian reformer William T. Stead, who invented modern journalism in his 1885 exposés of London vice rings pimping girl-child prostitutes,  saw the rich men who demanded constant supplies of new victims as Minotaurs;  Stead’s series was called The Maiden Tribute of Modern Babylon, and was written in prose as colourful as Varoufakis’s:

This very night in London, and every night, year in and year out, not seven maidens only, but many times seven, selected almost as much by chance as those who in the Athenian market-place drew lots as to which should be flung into the Cretan labyrinth, will be offered up as the Maiden Tribute of Modern Babylon. Maidens they were when this morning dawned, but to-night their ruin will be accomplished, and to-morrow they will find themselves within the portals of the maze of London brotheldom… The maw of the London Minotaur is insatiable, and none that go into the secret recesses of his lair return again.

Stead’s lurid press campaign was instrumental in the age of consent being raised by the Criminal Law Amendment Act 1885 from just 13 to 16. The Minotaur of mass child sex abuse in London was slain. We shall have to wait and see whether the Greek election and the appointment of such an articulate economist as Varoufakis may similarly presage the demise of the 21st century's ravening Minotaur at the centre of the world banking shambles. 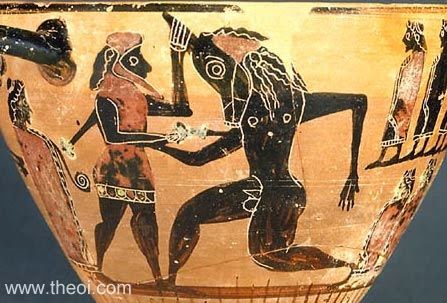