Aristotle and his Mississippi Lyceum 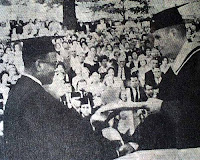 Congratulations to James Meredith on the 50th anniversary of his graduation in Political Science from the University of Mississippi on 18th August 1963. A photo of this momentous event illustrated the first newspaper I can remember being shown, by my father. Meredith was the first African American to have succeeded in being enrolled at that institution.

Meredith was incredibly courageous. The grandson of a slave, he served in the Air Force, before having his application to the university twice rejected out of hand. When the Supreme Court ordered that he should be admitted, and he tried to register, war broke out on campus. The U.S. army and the Mississippi National Guard had to quell race riots. Two people died. Over 200 were injured. Throughout his studies, Meredith was persistently harassed and had to be guarded 24/7.

The violent showdown took place at the Lyceum, the university’s oldest building (1848). Its Greek revival columns still show the bullet marks. It was named after the Athenian school founded by Aristotle, whose Politics Meredith will have read as part of his degree, including the philosopher’s weasel-worded defence of slavery. The influence of Aristotle’s arguments on pro-slavery campaigners in the 19th century has been shown by Sara Monoson in Ancient Slavery and Abolition, a book of which I am co-editor, and which (here I burst with pride) Henry Louis Gates Jr HIMSELF emailed to say was ‘a valuable addition' to his library.

The identification of the Old South with what it took to be ancient Greece, a society where democracy and slavery could co-exist in columned porticoes, is nowhere more apparent than in its universities. It is not only the architecture and the names of the elite fraternities (the oldest and most prestigious, phi beta kappa, was founded in Virginia at the College of William & Mary in 1776: the three Greek alphabet marks stand for Philosophia Biou Kubernetes, ‘philosophy is the helmsman of life’).


Classical scholars were embroiled in the grim Civil War: the endowed Chair of Latin at Virginia is still called the ‘Gildersleeve’ after the brilliant Hellenist Basil Gildersleeve. He fought for the Confederate cause both as a soldier and with racist editorials in the Richmond Examiner.[i]

Meredith is still a controversial figure because he ploughed his own furrow rather than attaching himself to the Civil Rights movement, and has been an active Republican.  He lives in Jackson, Mississippi.  When he graduated he became a four-year-old’s first hero. I hope he enjoys himself today.

[i] Delicately analysed by Elizabeth Vandiver and David Lupher in Ancient Slavery and Abolition (Oxford University Press). My co-editors are Richard Alston and Justine McConnell.
Posted by Edith Hall at 17:06