Which character in ancient Greek myth most resembles the British world heavyweight boxing champion, Tyson Fury, ill-famed for his invectives against females and gays? There were plenty of misogynist ranters in ancient Greece. The super-athlete Heracles was prominent amongst them. But he was attracted to beautiful youngsters of both sexes. Homophobia was not amongst Heracles’ vices.

Fury has Irish Traveller blood and has suffered from racism. But, paradoxically, he disgorges anti-immigrant abuse.  He would, I fear, have been urging on the bigoted crowd in the epoch-marking boxing match which took place near East Grinstead exactly 205 years ago, on 18th December 1810.

Tom Molineaux, a former slave from Carolina, was billed as ‘The Black Ajax’. The Greek hero Ajax was not in fact a boxer, but a champion wrestler; in Iliad 23, his bout with Odysseus is declared a draw because although he is physically stronger, Odysseus is his superior strategically. This makes the rigged defeat of the Black Ajax at the bare-knuckled fists of English heavyweight champion Tom Cribb, a former Bristol docker, even more painful. By the end of the match, wrote the eye-witness Pierce Egan, ‘you never saw two men so dead and yet alive, disfigured so bloody you could only tell ’em apart by their skins’.
Cribb was felt to be defending the honour of white men against their black brethren. Britons felt outraged at the ease with which the Black Ajax had that summer demolished two famous English pugilists, 'The Bristol Terror' and 'Tom Tough'. 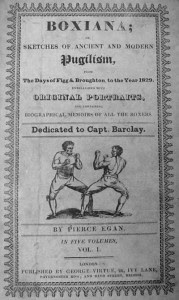 Black Ajax laid out Cribb decisively in the 28th round. Appalled that the American was about to be declared victor, Cribb’s second accused him of cheating. This created a long delay which allowed Cribb to come round and get back on his feet. Molineaux, flustered by this stratagem, was  finally defeated in the bloodbath of the 35th round.

Yet Egan, the  father of sports journalism (he claimed that Homer was actually the first sports reporter though) and self-advertised expert on ancient athletics (his soubriquet was 'the Plutarch of Boxing'), saw through the racist trickery. In his genre-founding Boxiana: or, Sketches of Ancient and Modern Pugilism (1812), he insisted that underhand means and the crowd’s bias had robbed Black Ajax of a glorious victory: ‘It will not be forgotten, if justice holds the scales, that it was Molineaux’s colour alone that prevented him becoming the hero of that fight.’

Molineaux’s career never recovered. He got drunk before the rematch and lost in 19 minutes. He died of alcoholism in Ireland just eight years later.  Until Tyson Fury began his outrageous public tirade against immigrants, the fixing of the Black Ajax’s defeat by Tom Cribb retained the dubious distinction of being the most shameful event ever in British sporting history.
Posted by Edith Hall at 19:44