The Other Lord Elgin's Marbles

So the lawyer Amal Alamuddin is to advise Greek PM Antonis Samaras on recovering the Parthenon marbles. I am interested in the Earls of Elgin because they live in Broomhall House, Fife, Scotland, near my parents. Reclusive, reactionary, Etonian, a leading freemason—the current, ninety-year-old 11th Lord Elgin (aka Andrew Bruce) still has a few bits of the Parthenon secreted at Broomhall. I feel Alamuddin should know.

It was Thomas Bruce, 7th Earl Elgin, who brought the marbles to Britain. He had a reasonable fortune from the labours of industrial workers on the Broomhall estates (in lime kilns, coal mines, iron foundries). But he was ambitious to become nationally famous. The plan to abduct half of the acropolis developed when he married the richest heiress in Scotland and felt financially equipped to turn his ancestral seat into the flashiest Greek revival building in existence.

Elgin wanted to house the marbles at Broomhall. He got several architects to draw up plans for turning it into a grand Caledonian Parthenon. He commissioned expensive Doric columns which never got installed; instead they grace Perth Sheriff Court. Tom Bruce’s wife left him, he ran out of money, and in 1816 persuaded the government to buy his loot.

Despite the gushings of every artist and culture-vulture in the land, there was substantial opposition to his £35,000 payout. Many Britons were outraged. Most of them did not have the vote, let alone a say in the Report of the Select Committee which recommended the purchase. There was a catastrophic harvest in 1816 and many were starving.  The radical Whig M.P. for Coventry, Peter Moore, said he would demand the money for his constituents, rather than give such a sum ‘to look at broken legs, arms, and shoulders.’ My favourite artistic response to the Elgin marbles is not by Keats or Canova, but this cartoon by George Cruikshank, The Elgin Marbles! or John Bull buying stones at the time his numerous family want bread. 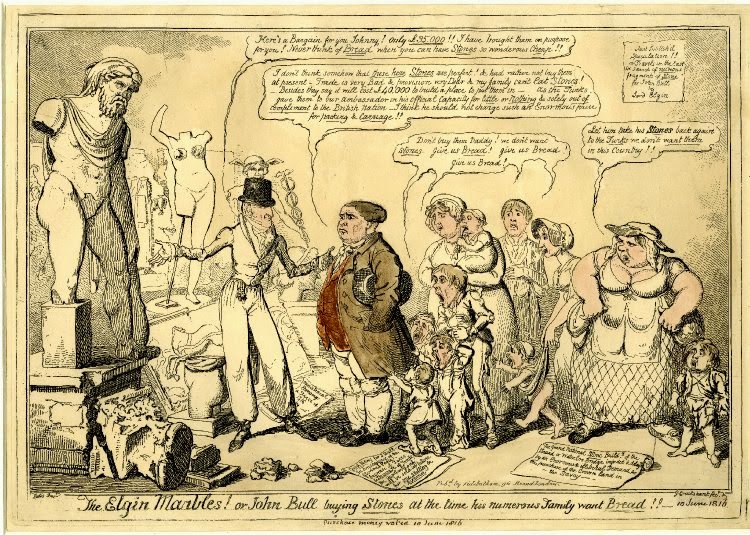 Cruikshank depicts the Leader of the House of Commons, Lord Castlereagh, as a sinister salesman trying to entice John Bull, the archetypal sensible Briton, to buy some broken statues. Castlereagh says, ‘Here's a Bargain for you Johnny! Only £35,000!! I have bought them on purpose for you! Never think of Bread when you can have Stones so wonderous Cheap!!’

Perhaps Alamuddin could supplement the Greek government’s case with the claim that the purchase of the marbles, authorised by a non-democratic government, was itself invalid?  I like the idea of Alamuddin and Samaras in a musical set at Broomhall, just west of the Forth Road Bridge, with a transhistorical backing chorus of contemporary Greeks and hungry Georgian Britons. Their first song should be this brilliant passage of Childe Harold by another, very different British aristocrat with a Scottish house, Lord Byron (2:12)

Cold is the heart, fair Greece! that looks on thee,
Nor feels as lovers o’er the dust they loved;
Dull is the eye that will not weep to see
Thy walls defaced, thy mouldering shrines removed
By British hands, which it had best behoved
To guard those relics ne’er to be restored.
Curst be the hour when from their isle they roved,
And once again thy hapless bosom gored,
And snatched thy shrinking gods to northern climes abhorr’d!