I do not have a big appetite. I eat little relative to everyone I know except for some Bollinger-and-fag-addicted anorexics. But when my family sprang a Mother’s Surprise and booked a table at the ‘AA Highly Commended Inn’ The Feathered Nest in Nether Westcote on the Oxfordshire/Gloucestershire border, I was left utterly ravenous.


The serving staff, who looked like agency models, were hurt when we rejected the wine list in favour of 2 cokes and 2 pints of bitter. The ravishing waiter gazed at the ceiling in horrified disdain when child 2 asked if they served scampi and chips.  I ordered cod. To be precise, ‘Cod with roasted cauliflower, bacon, caper and raisin purée’ at the price of £18.50 (that is, more than three times the current minimum wage for over-21s, which is £6.08 an hour). 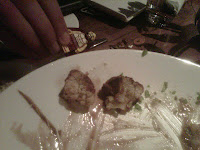 An hour later, 2 cubic inches of rubbery white fish arrived, along with one very small floret of cauliflower, split in half (see photo with Lego minifigure to supply scale), and no perceptible sauce. Absolutely no bacon, rasins, bread, potatoes or other vegetables either. I know the price of cash-and-carry commodities, and the plateful (which is a euphemism) cost the restaurant approximately 20 pence. 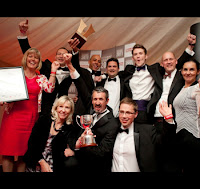 There were some  noisy people in green wellies at the next table raving about the champagne list. I accept that we were simply tacky wannabes and out of our consumer league. But even tacky wannabes are not completely gullible. Since when did this kind of mark-up become acceptable business practice?

I did complain, and a manicured midlife moustachioed male with an oiled coiffure (centre in this picture, holding the cup) reluctantly appeared. He scrutinised me as though I weighed in at 30 stone and smelt of bovine excrement. He asked disparagingly what Madam Might Feel Was an Adequate Portion of Cauliflower. I suggested 7 small or 4 large florets. He sneered as if I had vomited on his William Morris-themed carpet.

We went home and ate sandwiches. But the incident has worried me. Just how many people pay enormous amounts of money for nearly empty plates of food, in a modern revision of Hans Christian Anderson’s tale of the weavers and the Emperor’s New Clothes?

The father of my children suggested the title of this blog. Apparently the term COD in relation to supply of commodities means CASH ON DELIVERY, but without comeback for the purchaser. This is insulting to the cod or Gadus morhua, a dignified species resident in the North Atlantic, of which the females can lay an astonishing five million eggs at a time. But it is, surely, appropriate to the experience of the hungry female of the species Homo sapiens who imagines she can eat a decent dinner in a Cotswold pub once it has developed megalomaniac delusions. The phrase ‘to feather one’s own nest’ is glossed in the OED as ‘to avail oneself of opportunities for laying up wealth, to enrich oneself ’ at another’s expense. This should have been warning enough.